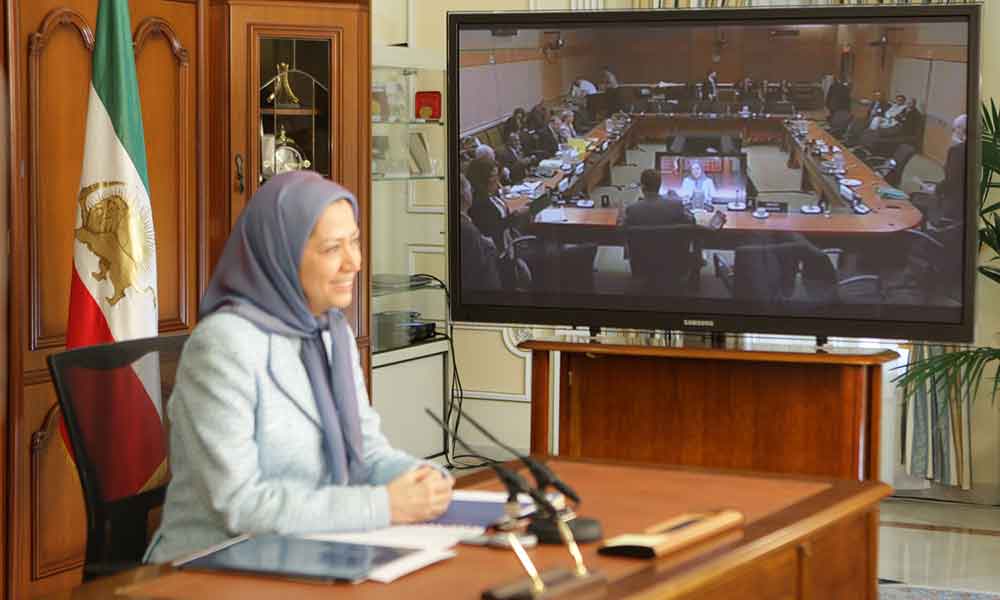 Members of the Subcommittee from all major three parties were present in the hearing which was chaired by Mr. Scott Reid from the conservative Party.
The hearing was held at the enf of “Iran accountability week”.
Addressing the parliamentarians Maryam Rajavi said:

I would like to thank you for your attention to the ongoing human rights situation in Iran as well as the humanitarian crisis in Camp Liberty.

I also want to express my deep appreciation for all your efforts during ‘Iran Accountability Week’.
Such efforts, as you said, ‘sounds the alarm on the four-fold Iranian regime threat’: nuclear, terrorism, incitement, and – in particular – the regime’s widespread and systematic violations of human rights.

Since the US handed over the security of Camp Ashraf to the Iraqi Government, in three attacks on Ashraf and three deadly missile attacks on Liberty, 116 residents have been killed by Iraqi forces, 1,350 have been injured and seven are still being held hostage. They have been held hostage for eight months. 20 residents have also lost their lives due to the medical blockade. Many years of the medical blockade continue to affect even those who have left Iraq.

Razieh Kermanshahi died yesterday in Albania because for many years she had not received proper medical care. Mohammad Babai passed away in Liberty on April 27, due to lack of medical care.
So far as the PMOI members are concerned, they are paying the price for their perseverance for freedom of the Iranian people.

The religious fascism ruling Iran, engulfed by political, economic and international crises, considers the PMOI as the most serious threat to its rule.

The PMOI is seen as the major force for change in Iran. Therefore, the regime will not spare an opportunity to strike at this organization.

For this reason, Liberty residents have become the prime targets of the regime’s atrocities.

I would like to address three aspects of the situation in Liberty which are very important: the security situation, living conditions and resettlement of the residents outside Iraq. The prime issue is lack of security in the face of missile attacks on Camp Liberty.

Trailers are overcrowded with no protective walls or bunkers for the residents to take shelter at the time of missile attacks. They are completely defenseless and vulnerable.

Iraq’s internal conflict and worsening security situation have increased the danger for the residents.

Remarks by the Iraqi Minister of Justice on March 2, and Iraq’s ambassador in Tehran on April 27 regarding the extradition of PMOI members in Liberty is yet another indication of the dangerous situation of the residents.

The second issue is the living conditions in Camp Liberty. The human rights of residents are being systematically violated.

A UN Working Group on Arbitrary Detention have in two reports described Camp Liberty as a prison.

Residents have no freedom of movement, they are denied the right to have family visits or meet their lawyers and are under a medical blockade. The Iraqi government is also trying to steal the residents’ property left at camp Ashraf and has so far prevented them from selling their property.

The third issue is the resettlement of the residents.

The question is what to do now?

2. To prevent another Srebrenica, the international community must provide security for the residents so long as they are in Camp Liberty, by stationing international observers and a unit of Blue Helmets in the Camp. By offering financial and logistical support for such an initiative, the Government of Canada can remove all obstacles and excuses.

3. Violation of the residents’ human rights is part of the ongoing human rights violations in Iran. Families of the 3000 Liberty residents in Iran are also suffering, as many of them have been arrested, abused, some executed and a number of them are on death row. This matter must be addressed at the UN Security Council. I call on the Canadian government to raise this matter in the third committee of the UN.

In the end, I would like to thank the Government of Canada and the parliament for their firm position towards the Iranian regime.

In recent years, the Government’s severing diplomatic ties with the mullahs’ regime and parliamentarians’ support for the Iranian Resistance have been heart-warming for our people in their efforts to achieve freedom. The regime has intensified suppression because it feels more vulnerable.

Despite claims of moderation by the regime’s president, there have been more executions over the past year compared with any other year in the past 25 years.

Last month political prisoners in Evin prison were brutally attacked by prison guards and the mullahs intensified their attacks on Ashraf and Liberty. In such circumstances, Canada’s support for human rights in Iran, freedom and the Iranian Resistance is more effective than any other time.
Our objective is a free and democratic Iran.
A republic based on separation of religion and state, gender equality and rule of law.
A new Iran with no discrimination against religious or ethnic minorities. A non-nuclear Iran.

I thank you for your attention and I would like to hear your views.