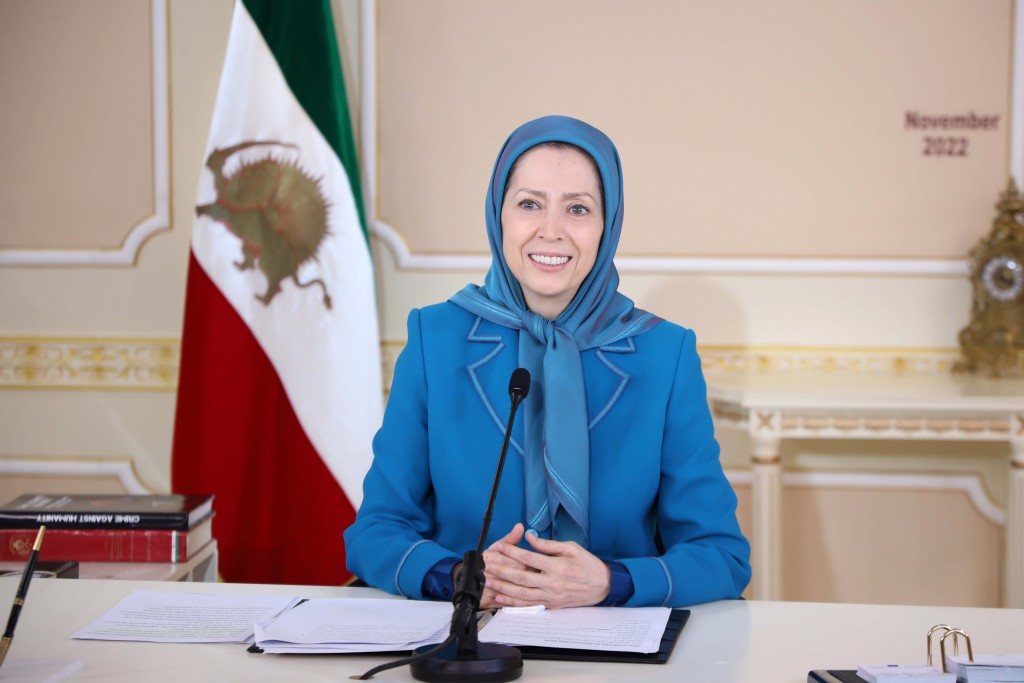 Maryam Rajavi: Iran is on the brink of a major change

Canadian MPs and senators held a conference at the Parliament of Canada on Tuesday morning, November 22, 2022. Mrs. Judy Sgro, a senior Member of Parliament and former Minister of Immigration, presided over the conference entitled “The Iranian people’s nationwide uprising for a democratic republic and against a misogynist regime.”
Dozens of MPs, senators, and advisors, including three former ministers, from the ruling Liberal Party and the Conservative, Bloc Québécois, and New Democratic parties, attended the conference.
In addition to Maryam Rajavi, Mrs. Judy Sgro, a senior MP from the Liberal Party and former Minister of Immigration; Mr. Michael Cooper, MP from the Conservative Party and vice-chairman of the parliamentary Human Rights Committee; Ms. Andréanne Larouche, MP from the Bloc Québécois, vice-chair of the Standing Committee on the Status of Women and member of the Canadian Parliamentary Association, and Mr. Dave Epp, a Conservative MP, also addressed the conference.
Maryam Rajavi told the conference:

Maryam Rajavi: Going through a critical moment of its history, Iran is on the brink of a major change

Distinguished members of the Canadian Parliament,
I would like to thank you for your attention to the issue of Iran and, specifically, the adoption of the motion to expel the mullahs’ regime from the UN Commission on the Status of Women. The Iranian people will never forget the friends of hard times.
Today, Iran is going through a critical moment in its history. Despite the widespread crackdown, a nationwide uprising has lasted for over two months and it has intensified in recent days.
During this period, the regime’s forces have killed at least 625 people. Every day new sections of society join the uprising. Last week, Tehran’s Bazaar and most cities as well as some sections of workers joined the strike.
The balance of power in Iran between people and Resistance on the one side and the mullahs’ regime on the other has changed. Iran is on the brink of a major change.
Today, very briefly, I want to address four topics: Did the Iranian people’s uprising emerge overnight? What is their desire? What is the roadmap to achieving this desire, and what are the obstacles? What do the Iranian people expect from the international community?

The current uprising did not happen overnight. It is rooted in 43 years of repression. Women are at the forefront of this uprising because they have been under double oppression. They have been deprived of all their fundamental rights.
The uprising is founded on objective conditions. In addition, it is rooted in a 40-year resistance with 120,000 martyrs. Thirty thousand political prisoners were massacred just in the summer of 1988.
The courage of Iranian boys and girls, which the world is witnessing today, is inspired by such sacrifices registered in the nation’s historical memory.

The Iranian people’s desire, especially women, is highlighted in their slogans. They want to overthrow the entire regime.
Having learned from past experiences, especially the anti-Shah revolution in 1979, Iranian people know what they want and do not want.
Iranian people do not want religious tyranny. They do not want to go back to the Shah’s dictatorship and his one-party system, either, where he said publicly, anyone who disagreed with his party should be in prison.
Today, certain slogans as “Death to the oppressor, be it the Shah or the mullahs” and other similar slogans have become a part of the revolutionary culture in Iran.
The Iranian people desire a democratic republic based on the separation of religion and state, a multi-party system, equality and fundamental human rights for all citizens. They want an Iran where no one enjoys any privilege because of religion, or nationality, or family.

The roadmap to achieve this goal

But, how can we achieve this goal, and what are the obstacles?
The way to achieve this goal is to strengthen the resistance. The people of Iran know that no one will offer them freedom on a silver platter.
The main obstacle is the regime’s brutal repression and plots to destroy its political alternative. The regime has recently resorted to a new tactic of repression.
On November 16, in the city of Izeh in southwest of Iran, the regime’s agents opened fire on protesters, killing at least ten people, including three under-18 that a ten-year-old boy, Kian, was among them. The regime, however, claimed that it was the work of terrorists.
During the last two months, the regime’s suppressive forces have killed about 60 children and teenagers.
In recent days, the regime attacked Javanrud, Mahabad and other cities with heavy weapons and armors, killing and injuring several people.

Some question, how people, particularly young people are still on the streets, despite brutal crackdown. The answer is simple: They do not see any future with this regime. They clearly say that we have nothing to lose.
For the Iranian people, fighting against the regime with all means, as a last resort, has become inevitable.
As stated in the introduction of the Universal Declaration of Human Rights, “It is essential, if man is not to be compelled to have recourse, as a last resort, to rebellion against tyranny and oppression, that human rights should be protected by the rule of law.”
Referring to the MEK Resistance Units, regime’s officials have announced that they have arrested hundreds of “protest leaders.” Those arrested are under torture and at risk of execution.
In such a situation, the golden principle for the success of the popular movement is being organized.

The alternative to religious dictatorship in Iran

It is not without reason that the Iranian regime has increasingly targeted the People’s Mojahedin Organization of Iran as the only organized resistance movement inside Iran. In addition, it attacks the National Council of Resistance in all areas as its political alternative.
The Iranian regime considers the MEK as the only threat to its survival. The regime’s relationship with western countries is based on their position on the MEK.
The Judiciary’s deputy for International affairs said last June, “There has been no meeting with the European ambassadors or delegations in which we have not addressed the issue of MEK.”
This clearly shows the fear of the regime from the Iranian Resistance and that they are prepared to resort to any crime to destroy it.

In addition to domestic repression, the regime has launched a disinformation campaign internationally and in the virtual space against its principal opposition. The regime’s agents act under different covers, including being a critic in order to justify more suppression and executions of opponents.
By doing so, they want to create the impression that there is no democratic and organized alternative to the regime, and if the clerical regime is overthrown, Iran and the region will become unstable. But this is a big deception.

There is a nationwide resistance and a political democratic alternative in Iran.
The National Council of Resistance of Iran is a coalition of different political forces and tendencies promoting unity for regime change and the establishment of democracy in Iran. The NCRI is the longest-lasting political coalition in Iran’s modern history.
The secret to the NCRI’s perseverance is its commitment to the principles, transparency in its positions, and its democratic relations.
The NCRI has stated time and again that it is ready to cooperate with all other forces based on three principles: Putting an end to the entirety of the regime, the establishment of a republic, and the separation of religion and state.
Because we firmly believe that, a coalition will remain stable if its members have shared principles.

Expectations from the international community

Dear friends,
We are getting close to the anniversary of IRGC missile attack on flight 752, killing 176 innocent people. The regime’s refusal to take responsibility for this terrible crime shows the regime’s true nature to the world. With all these crimes, it is clear for all that, this regime only understands the language of firmness.
In such a situation, our people and we expect Canada to:
1- Recognize the Iranian people’s right to defend themselves and their struggle to overthrow the regime;
2- Put the entire Ministry of Intelligence and the IRGC, Khamenei’s main repressive forces, on the terrorist lists of Canada and the United Nations; and
3- Deprive the regime’s agents of their citizenship and deport them.
Thank you all.