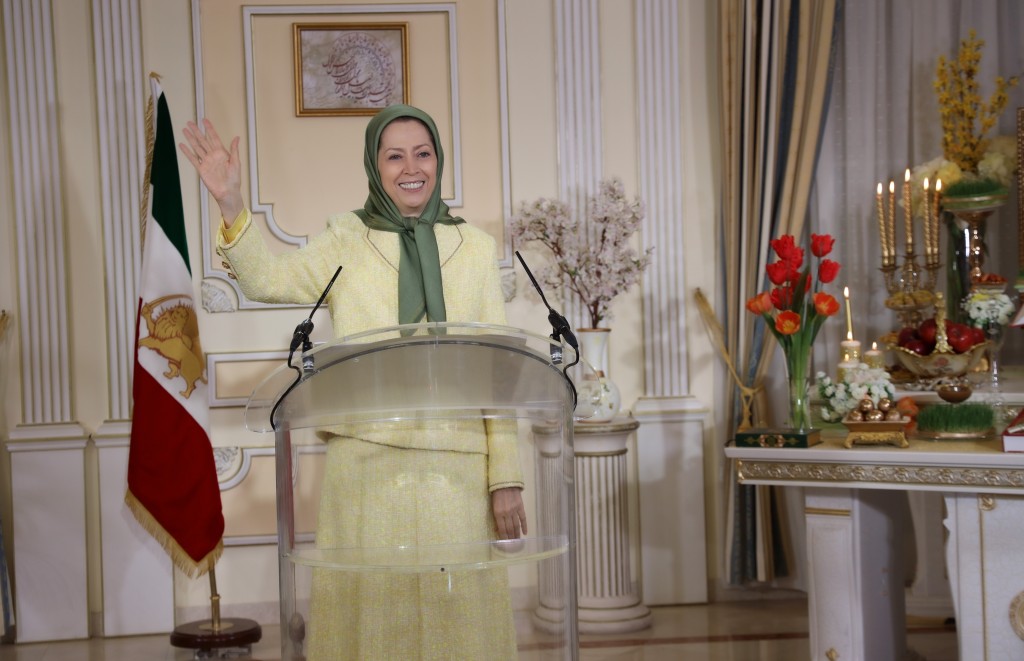 Messages by Political Prisoners, Resistance Units, remarks, and messages by 84 parliamentarians and political dignitaries from 20 countries

In her Nowruz speech, Mrs. Rajavi congratulated the people of Iran and underscored:

– The Iranian people’s readiness for overthrowing the regime is beyond the shadow of a doubt, and the mullahs’ presidential election sham will face their decisive boycott.

– The great advancement of the Iranian year 1399 was Iran’s courageous youth rushing to join the Mujahedin-e Khalq (MEK/PMOI) and expanding the network of its supporters in Iranian cities.

– Germany, Belgium, and France must publish all documents obtained from the regime’s terrorist diplomat and reveal the agents’ names and contacts working with the clerical regime and its Intelligence Minister.

The ceremonies marking Nowruz and the advent of the New Iranian Year, 1400, were held with the presence of Mrs. Maryam Rajavi, the President-elect of the National Council of Resistance of Iran (NCRI), and all supporters of the Iranians Resistance across the world. This ceremony was broadcast live by Simay-e Azadi into Iran, with thousands of locations in the U.S., Canada, Europe, and Iran. Members of the People’s Mojahedin Organization of Iran (PMOI/MEK) in Ashraf-3, Albania, joined the event online. The ceremony conveyed the passionate message of uprising and the overthrow of the religious dictatorship in the year 1400 and establishing a democratic, independent republic based on the separation of religion and state in the free Iran of tomorrow.

Speaking from her residence in Auvers-sur-Oise, France, Mrs. Rajavi addressed the event, congratulating Nowruz and the year 1400 to everyone. She stressed that at the turn of the New Year, the clock is ticking in tandem with the footsteps of protesters who yearn for the overthrow of the religious fascism, who seek to establish a democratic and independent republic based on the separation of religion and state, a free Iran without the Shah or the Sheikh, with no reliance on despotism. Mrs. Rajavi added that Today, the mullahs’ religious fascism is stuck in dire conditions, which have been unprecedented over the past 40 years. Rouhani’s government is broken and crippled… Khamenei needs to consolidate power and preserve his hegemony to ensure the regime’s survival. Therefore, he must eliminate the so-called reformist faction, which functions as a protective insulator for the regime. So, what becomes clear as day, is the Iranian Resistance solution, the strategy of overthrowing the regime through popular uprisings.

NCRI President-elect added: The Iranian Resistance has always boycotted the clerical regime’s sham elections over the past 40 years. Over time, more groups, parties, and social strata have joined the boycott. The upcoming presidential election will also face the overwhelming boycott of the Iranian people, which is the flip side of popular uprisings and yet another response to the murderers of 1500 blood-drenched martyrs of November 2019 protests. The Iranian people have said and will say NO to the mullahs’ regime, NO to religious fascism, NO to despotism, tyranny, and pillage. YES, to freedom, YES to universal suffrage, and YES to a democratic republic.

Mrs. Rajavi said as the Iranian Resistance stated, when the Coronavirus first spread to Iran, Khamenei and Rouhani have adopted the strategy of causing massive human casualties and sending people to the minefields of the Coronavirus to protect the regime from the threat of uprisings and from being overthrown.
In the case of the Ukrainian passenger airliner’s tragic downing [in January 2020], no one could initially believe that the regime had shot down the plane itself. In the case of the disease, initially, it was inconceivable for many to believe that Khamenei and Rouhani are deliberately sending people to their demise. Their criminal policy has to date taken the lives of more than 235,000 of our compatriots so far. If, as we said from the outset, Khamenei had allocated part of the resources amassed in foundations under his control and parts of what he spends in Iraq, Syria, Yemen, Gaza, and Lebanon, to confront the Coronavirus, the scope of the disaster would have been much less. Indeed, the Coronavirus and the virus of the Velayat-e Faqih are allies. Khamenei even accepted the disgrace of his inhuman policy for preventing the import of vaccines to Iran.

Despite the disease, she stressed that our disenchanted people displayed their outrage and fury repeatedly during riots in prisons, social protests, the strike of workers, teachers and educators, retirees and pensioners, students, farmers, and bazaar merchants. The reality is that the circumstances for a revolution are in place in Iran, and the social readiness for overthrowing the regime is beyond the shadow of a doubt.

To contain this tremendous explosive potential, the mullahs stepped up repression, arrests, and executions, they resorted to demonization campaigns against the MEK and the Iranian Resistance, and hatched terrorist plots against them. And they tied their hopes and prayers to the 2020 US elections. Nevertheless, the realities on the ground show that a return to the previous balance of power is impossible, and the regime will not be able to unwind. Its missile launches on Iraq and Saudi Arabia will not solve any of their problems either. So, whatever happens in the future, the outcome awaiting the regime would be the outburst of uprisings leading to its overthrow. They should know that with the JCPOA or without it, with the sanctions or without them, the regime cannot escape the outbreak of uprisings and its overthrow. Three years ago, at the Free Iran Grand Gathering in Villepinte, I said: “We welcome any retreat on the part of the mullahs.” And I emphasized that “the overthrow of the regime, democratic change in Iran and establishment of a free Iran lies within the realm of our own responsibility and that of our people.”

Referring to the activities of the Resistance Units aimed at breaking the spell of repression, Mrs. Rajavi said that a major advancement in the Persian calendar year 1399 [March 2020 to March 2021], was in the form of the overwhelming initiative of Iran’s courageous youth to join the MEK and to spread the network of its supporters in Iranian cities. The wave of arrests, instilling of terror and fear, and ceaseless publication of books, movies, TV serials and various publications against the MEK inside Iran by the regime are aimed at denting the younger generation’s support for the MEK. Internationally, too, there was a bipartisan resolution last June signed by a majority, 222 members, of the U.S. House of Representatives, as well as a resolution supported by 158 members of the new session of Congress, declaring support for the Iranian Resistance’s ten-point plan and rejecting both dictatorships of the Shah and the clergies. These resolutions are very telling and clear. Both stipulate that the Iranian people have “rejected monarchic dictatorship and are opposing religious tyranny.”

In another part of her remarks, the NCRI President-elect added that the historic verdict of the Court of Antwerp in Belgium and handing down heavy prison sentences revoked the passports and citizenships of the regime’s agents, instilling fear among the regime’s intelligence agents across Europe.
On behalf of my compatriots and the dignitaries who took part in the Resistance’s annual gathering in 2018 and were targets of the regime’s terrorist plot, Mrs. Rajavi urged the governments of Germany, Belgium, and France, to set aside any political considerations and publish the contents, documents, names, and addresses obtained from the notebook of the regime’s terrorist diplomat. No document must be classified or treated as highly confidential. To secure immunity against the regime’s terrorism, espionage, and demonization, European services in various countries must reveal the names of the agents and contacts working with the clerical regime and its Intelligence Ministry who use the cover of refugees or citizens in these countries, she emphasized.

Secretariat of the National Council of Resistance of Iran
March 20, 2021