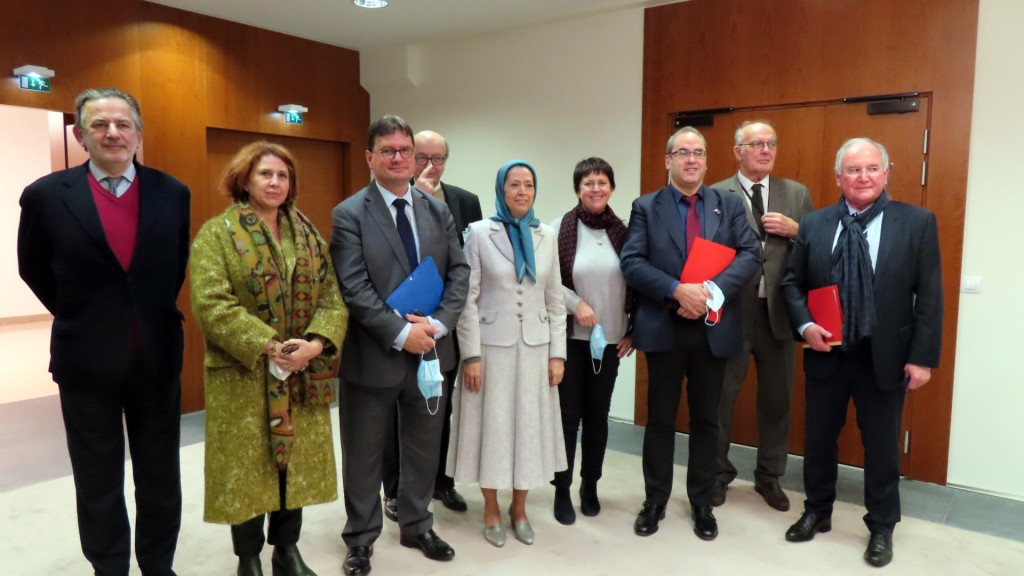 At the invitation of the French Parliamentary Committee for a Democratic Iran (CPID), Maryam Rajavi participated in a conference with the French National Assembly members on Wednesday, January 12, 2022.
Ms. Michèle de Vaucouleurs, the CPID chair, opened the meeting by welcoming Maryam Rajavi. Ms. de Vaucouleurs reviewed the five-year activities and achievements of the Committee for a Democratic Iran during a full National Assembly term.
In her remarks to the conference, Maryam Rajavi said:

I wish you all the best for the year 2022. I wish happiness and health for you and your families.
The CPID support and the role of every one of you are invaluable for the cause of the Iranian people and Resistance.
You have effectively echoed the Iranian people’s desires in France and Europe during this legislative term.
Your messages of solidarity have encouraged the Iranian people in their struggle for freedom and democracy. I hope that in 2022, we will continue our joint march for the liberation of Iran.
I would also like to pay tribute to our dear friend Jean-Pierre Michel who left us in 2021. He was a great friend of the Iranian Resistance for many years, both in the National Assembly and the Senate.

The volatile state of society

In our meeting last November 24, I explained the volatile state of Iranian society. Shortly afterward, the farmers in Isfahan held a massive demonstration. The regime responded with repression, and the people of Isfahan rose up with cries of “Down with the dictator.” They demanded the return of water to the Zayanderud River. However, the IRGC fired pellet guns, wounding dozens of people in the face and eyes. Several lost their sight.
Earlier, the people rose up against the water shortage in Khuzestan Province as the IRGC had diverted the river. The Revolutionary Guards killed several people, and half of the country’s provinces showed solidarity with Khuzestan.
Every time these uprisings erupt, the regime shows its fear of the People’s Mojahedin Organization (PMOI/MEK) and the Resistance Units.
A few days ago, the IRGC shelled villages in Sistan and Baluchestan.
Since 2018, there have been eight major uprisings in Iran. Strikes and protests by workers, teachers, nurses, and pensioners are on the rise. Most Iranians live below the poverty line as the mullahs’ supreme leader and his IRGC have monopolized the country’s wealth.
Raisi has increased the IRGC’s budget by 240 percent in the new Iranian fiscal year. In contrast, the budget for education or health have not changed, despite the pandemic. Military and law enforcement institutions account for more than 34 percent of the total budget. The regime has invested heavily in nuclear weapons and ballistic missile programs, as well as in warmongering in the region. It is further embezzling the assets.
All these activities have devastated the economy and created explosive conditions in society. That is why the regime considers the people as its enemy. 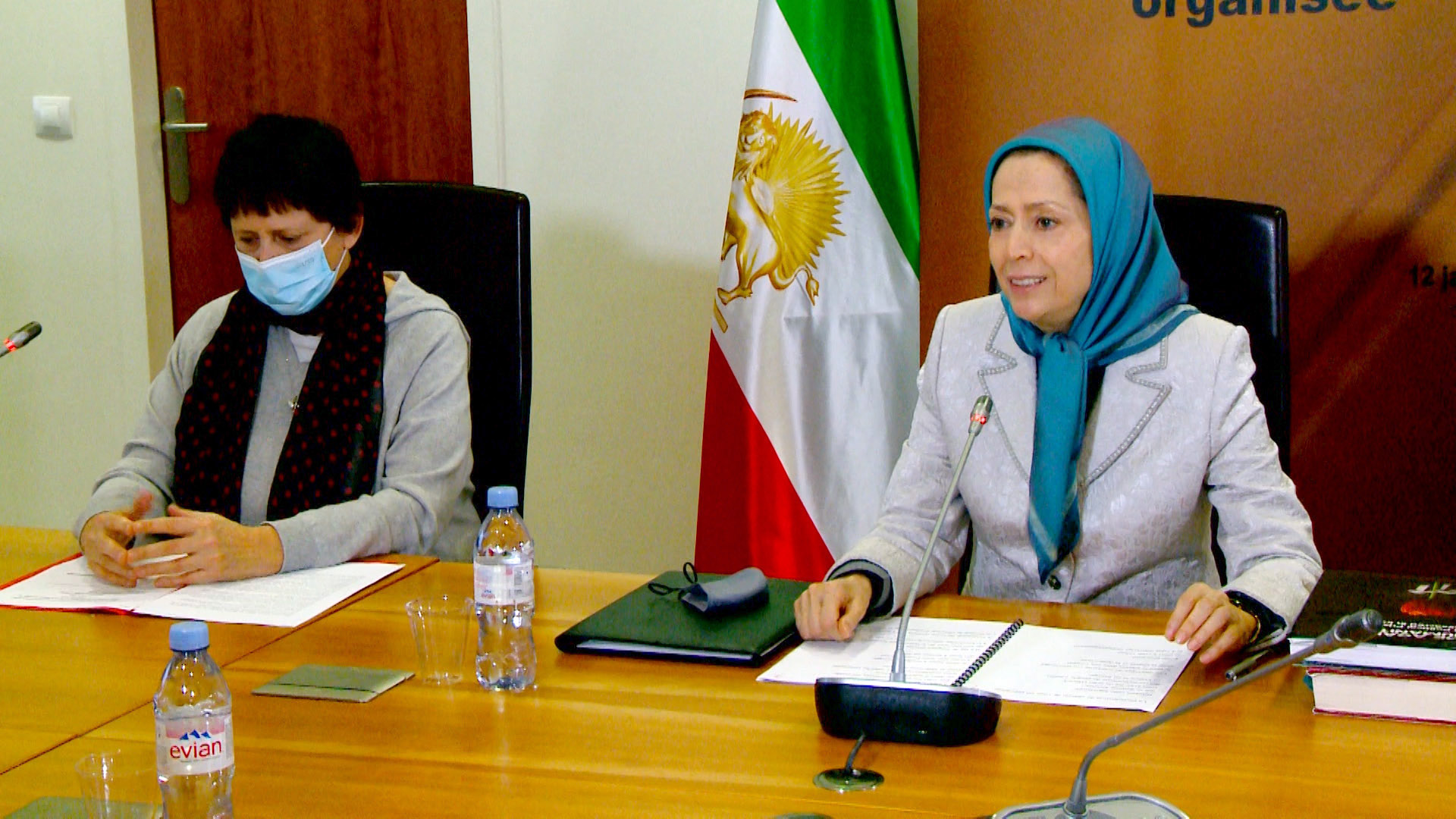 The PMOI’s popularity among the younger generation

In such circumstances, the regime is terrified of the PMOI’s popularity among the younger generation. They cannot stop the expansion and empowerment of Resistance Units despite massive repression and widespread arrests. They feel the forthcoming danger of overthrow, and their priority is the regime’s survival.
The clerical regime has destroyed the environment, impoverished the workers, and raised prices. It has stepped up discrimination against the Baluch, Kurdish and Arab ethic groups, against non-Muslims, and even against Sunni Muslims. The regime spends the country’s revenues on wars and terrorism in the region.
They cannot control the economic crises and rely on the high number of Covid victims to bring the people to their knees and prevent their uprisings.
Therefore, the moribund regime has resorted to nuclear weapons production and tried to buy time during the negotiations.
It was not a coincidence that Khamenei put Ebrahim Raisi at the helm of the government. He is the executioner of the 1988 massacre, recognized as a crime against humanity. He is there to crack down on the public and expedite the regime’s access to the nuclear bomb.

The clerical regime cannot and does not want to agree with the people of Iran or the world.
Domestically, it is facing revolts. In the region, its influence is diminishing in Iraq and Syria, and in Lebanon, it is facing strong protests. Therefore, state-sponsored terrorism has remained as the regime’s only instrument of policy abroad.
The regime’s terrorist diplomat and his three accomplices who wanted to bomb the NCRI’s 2018 rally in Villepinte are now in prison in Belgium. For the first time in decades, a diplomat personally carried a bomb on a passenger plane from Tehran to Vienna and handed it over to terrorists. This is the first time a diplomat has been sentenced to 20 years in prison on European soil.

It is time for France to take the initiative for a new policy. It is necessary to show firmness in the face of the mullahs’ hostage taking and blackmail.
The era of the illusion of reform within the religious dictatorship has come to an end. The only policy that would guarantee France’s long-term interests would be a policy that is consistent with the Iranian people’s aspiration to establish a genuine democracy.
Such an aspiration is reflected in the NCRI’s platform for a democratically elected republic based on respecting equality for all, independence of the judiciary, abolishing the death penalty, and the separation of religion and state.
We urge the French National Assembly to condemn the 1988 massacre of more than 30,000 political prisoners as a crime against humanity and genocide by a regime whose president was directly involved.
Once again, I wish you a very happy New Year, and I hope that 2022 will be the year of significant progress and change consistent with our objectives.