Speech at the Italian Parliament 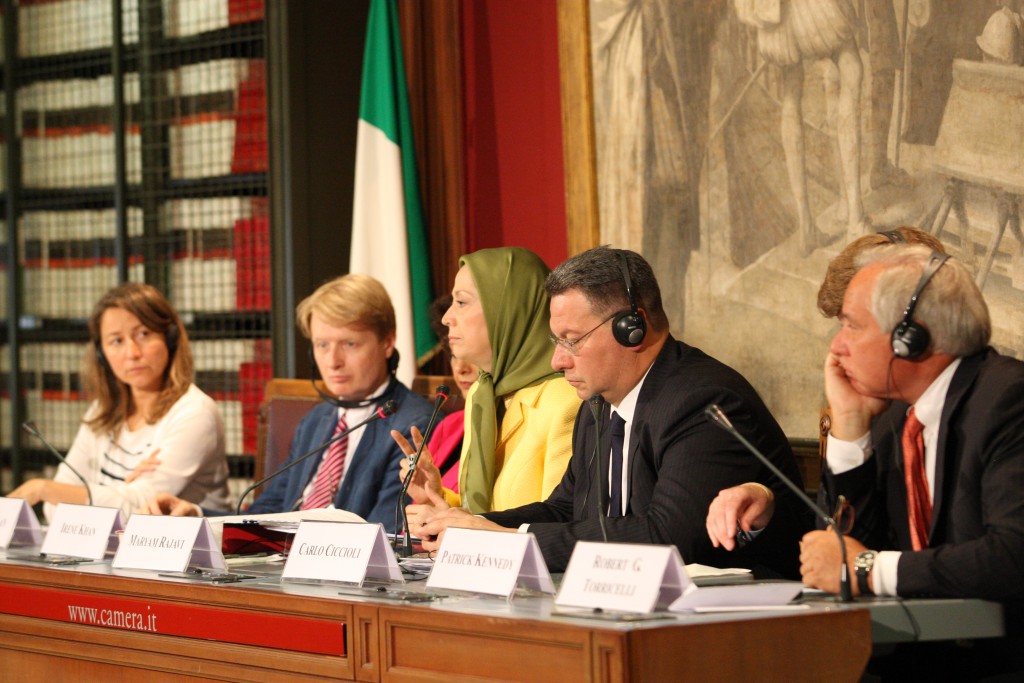 On Wednesday, July 6, 2011, the President-elect of the Iranian Resistance, Mrs. Maryam Rajavi, attended a conference at the italian Parliament to speak about the situation in Camp Ashraf.

Below is the text of the speech in English:

Six months have passed since the start of the spring of revolutions in the Middle East and North Africa.
Thus far, dictatorial regimes in Tunisia and Egypt have fallen.
The regimes in Libya, Syria and Yemen are at the verge of collapse.
And, Iraq’s new dictatorship is encircled by growing protests.
In Iran, too, the mullahs’ regime is grappling with a number of fatal challenges:

• The first is the threat of the Iranian people’s uprisings, which can be sparked at any moment;
• The second is the threat posed by the organized resistance, which is an inspiration for the Iranian society, and particularly women and youths, to pursue freedom;
• The third is the spring of revolutions in the Middle East and North Africa which acts as a recurring nightmare for the Iranian regime;
• And, finally, there is the crisis of disobedience by the mullahs’ President and a deadly power struggle being waged at the helm of the clerical regime, which has forced the regime into an extremely difficult predicament.

Today, whether Khamenei decides to sack Ahmadinejad or whether he decides to keep him in power for the next two years, the fact remains that in either scenario the entirety of the regime has been dealt with a powerful blow.

Faced with the ensuing pressures resulting from this deadlock, the mullahs are trying to eliminate the residents of Ashraf and harm the Iranian Resistance in order to avert their regime’s downfall. This renders the defense of Ashraf precisely in line with the establishment of democracy in Iran.

That is why the Iranian regime’s officials have in recent weeks repeatedly met and conducted negotiations with their puppet government in Baghdad.

On June 25, the clerical regime’s Intelligence Minister referred to these talks and said, “We have made plans for the dissolution of the PMOI as soon as possible, and we are carrying out talks with the Iraqi government to that effect and about the ultimate fate of Ashraf.”

This plot, and particularly the April 8 attack, provoked extensive rebuke and protests in Iraq, the Arab countries, as well as in Europe and the United States. They included the majorities of 30 parliaments around the world, the UN High Commissioner for Human Rights, Ms. Navi Pillay, and Ms. Catherine Ashton, the EU High Representative for Foreign Affairs.

In recent days, over 525,000 people in Iraq’s Diyala province, where Ashraf is located, have signed a declaration, saying that the hysteric efforts to eradicate the residents of Ashraf lay bare the Iranian regime’s meddling in Iraq. In their declaration, the people of Diyala voiced support for the proposed solution by the European Parliament, and called on the UN and the US to assume the protection of Ashraf so long as PMOI members reside there.

We salute this great movement, which despite the security threats in Iraq, has managed to make such strides in support of the residents of Ashraf.

The people of the Middle East are pleased to see western governments finally supporting the arisen people of Libya after years of backing dictatorial regimes, and they are praising your leadership.

However, at the same time, western governments continue to remain passive in the face of the main regional and global threat, the religious dictatorship ruling Iran.

The April 8 massacre at Ashraf, a crime that could be avoided, is one of the dire consequences of the irresponsible policy of the West, and particularly the United States, with respect to the Iranian regime.

The prolonging of this policy, and the silence and inaction about the inhumane siege on Ashraf by the Iraqi government has turned the issue of the wounded in Ashraf into a humanitarian tragedy.

The mullah-inspired deadline for the closure of Ashraf paves the way for yet another catastrophe and the irresponsible US approach, despite all the legal obligations towards the residents of Ashraf, has granted the Iranian dictatorship and its Iraqi proxies enough space to perpetrate more attacks.

The refusal to publish the report produced by the American military, political and medical delegation that visited Ashraf in the aftermath of the April 8 massacre, the opposition to requests to visit Ashraf by the European parliamentary and US Congressional delegations which sought to investigate the crime, and the illegal and unfeasible idea of displacing the residents of Ashraf inside the Iraqi territory, all essentially fuel the murderous machinery operated by the clerical regime and the Iraqi government.

Today, the fundamental question in the countries of the region, particularly Syria and Libya, revolves around the protection of defenseless and unarmed populations against the assault of armed forces and the suppressive machinery of tyrannical regimes.

In the same vein, the crisis in Ashraf results from nothing more than the fact that the lives of unarmed people are being threatened by attacks from columns of armored vehicles.

In the course of the April 8 attack, out of the 346 wounded, 225 suffered from gunshot wounds and grenade shrapnel injuries, while 22 were run over by Humvees.

This is the result of an attack by forces armed to the teeth against a defenseless population. And the solution lies in providing protection to the residents of Ashraf.

Any plan that fails to guarantee the protection of Ashraf residents, including their displacement inside Iraq, would inevitably fall prey to the deceptive tactics of the Iranian regime and its puppet government in Iraq and paves the way for bigger catastrophes.

But, once the idea of repelling the threat of a massacre and cleansing is accepted as a fundamental notion, a variety of solutions for Ashraf appear on the horizon.

The European Parliament’s plan has been internationally endorsed and enjoys considerable support from various parliaments, including both houses in Italy, precisely because it ensures the protection of Ashraf residents in the short term while offering a permanent and peaceful solution in the long term. But this plan has directly and indirectly been obstructed by the Iranian regime and the Iraqi government because the clerical regime has recognized only two options for the residents of Ashraf: surrendering or being eradicated. The regime welcomes any option that would bring one of these two options into reality, and that is why the displacement of the residents inside Iraq is being backed by the mullahs. Such displacement would facilitate their massacre. But what is missing from the calculations of all sides is the determination of the PMOI when it comes to the ideal of democracy and freedom. They will never choose to surrender to the demands of the mullahs.

Allow me to talk about those wounded and suffering from various illnesses at Ashraf. They are currently denied an opportunity to be treated and there is a deliberate attempt under way by the Iraqi government to gradually kill them.

I have done everything that I could over the past three months for the wounded in Ashraf.

I have no doubt that if US forces had not refused medical aid, a number of those who lost their lives would still be among us today. They include Saba Haftbaradaran, Behrouz Sabet, Bahman Atiqi, Mansour Hajian, Mohammad-Reza Pirzadi, and Majid Ebadian.

Due to a lack of access to medical treatment over the past three months, some of the wounded have lost the use of their limbs.

Medical specialists have warned that such cases are bound to increase, because the Iraqi government has imposed an inhumane medical blockade on Ashraf. Their objective is to eradicate all the members of the Resistance both in Ashraf and elsewhere, just as they assassinated in Rome the NCRI’s representative in Italy, Hossein Naqdi.

In the midst of this struggle, I have pinned my hopes on the humanitarian sentiments of the Italian people.

We call on the European Union and the United States to embark on a humanitarian initiative with respect to Ashraf.

The realistic and accessible solution for the period of transition is to install a team of UN monitors in Ashraf whose protection is ensured by the US and the EU in accordance with their international obligations.

I thank you all once again.