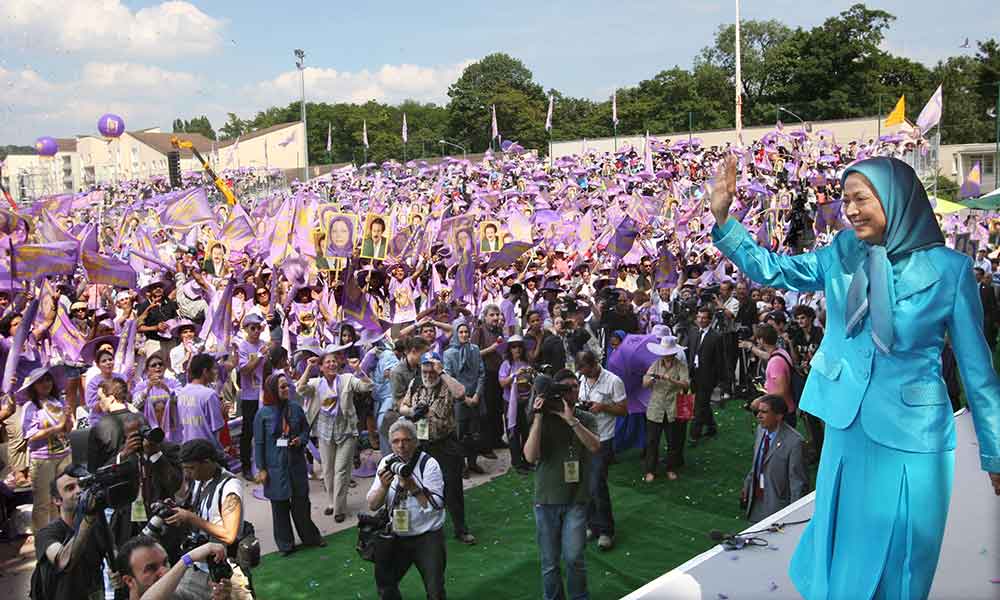 Dear Compatriots,
Over the past year, assaults and conspiracies by the regime against Ashraf were multiplied a hundred-fold.
Khamenei was convinced that in order to contain the uprising and mend the schism at the top of his regime, he must first eliminate Ashraf.
Khamenei also needed to destroy Ashraf to realize his evil designs in Iraq, because he viewed the Mojahedin in Ashraf as responsible for exposing his meddling and crimes and for leading the calls to curb the regime’s influence in Iraq.
Clearly, suppression in Iran and export of terrorism and fundamentalism are intrinsic to the clerical regime. Without it, the title of “the Supreme Leader of All Muslims around the world” loses its meaning and the Revolutionary Guards would vanish.
Thus, cutting off the hands of the mullahs from Baghdad will lead to ending its rule in Tehran.
For this reason, confronting the domination of the clerical regime in Iraq is significant for the Iranian people’s movement for freedom.
Accordingly, we ask, what right does the regime in Iran have to appoint a prime minister for Iraq or say that the premiership of Dr. Ayad Allawi, who has been elected by the people of Iraq, constitutes a red line?
Who is truly plotting to assassinate Dr. Allawi?
And who was it that disqualified the Secretary General of Iraqi National Movement, Dr. Saleh Mutlak, Dr. Dhafer Al-Ani and many other Al-Iraqiya candidates from taking part in the elections?
Was it not Khamenei who sent a message to Dr. Mutlak through his ambassador in Iraq that if he calls the Mojahedin terrorist just once, all doors would be open to him?
Dr. Mutlak’s sin is that he said, “The joint escapade of the Iranian regime and the Iraqi government outside the gates of Ashraf is a despicable act which seeks to justify the disgraceful siege and inhumane pressures against resisters who have dedicated their lives to freedom, their principles and their ideals.”

The renowned Shiite cleric, Mr. Ayad Jamal ad-Din, has also said, “I offer a litmus test to assess Iraqi political forces. Any force that is trying to expel the People’s Mojahedin Organization from Iraq shows that it has organic ties with the Iranian regime.”
Despite all conspiracies and threats, however, in the recent elections, the people of Iraq took a giant leap toward countering the Iranian regime and its proxies in their country.
This was to the extent that amid the firestorm of terrorism and fraud by Iran’s rulers, the Iraqi alternative came out of the elections as the winner.
The new Iraqi government has yet to be formed. But, in any case, the regime’s strategy in Iraq has suffered a serious defeat.
Hail to the people of Iraq, who disrupted the regime’s plots to devour their country by their vote, determination and perseverance.
And now the time has come to evict and prevent the regime’s meddling in Iraq, Afghanistan, Gaza, Lebanon, Yemen and other countries in the region.
Look how protests have formed from Basra to the Iraqi Kurdistan against the regime’s interference.