Maryam Rajavi: Protection of Ashraf residents is a matter of urgency 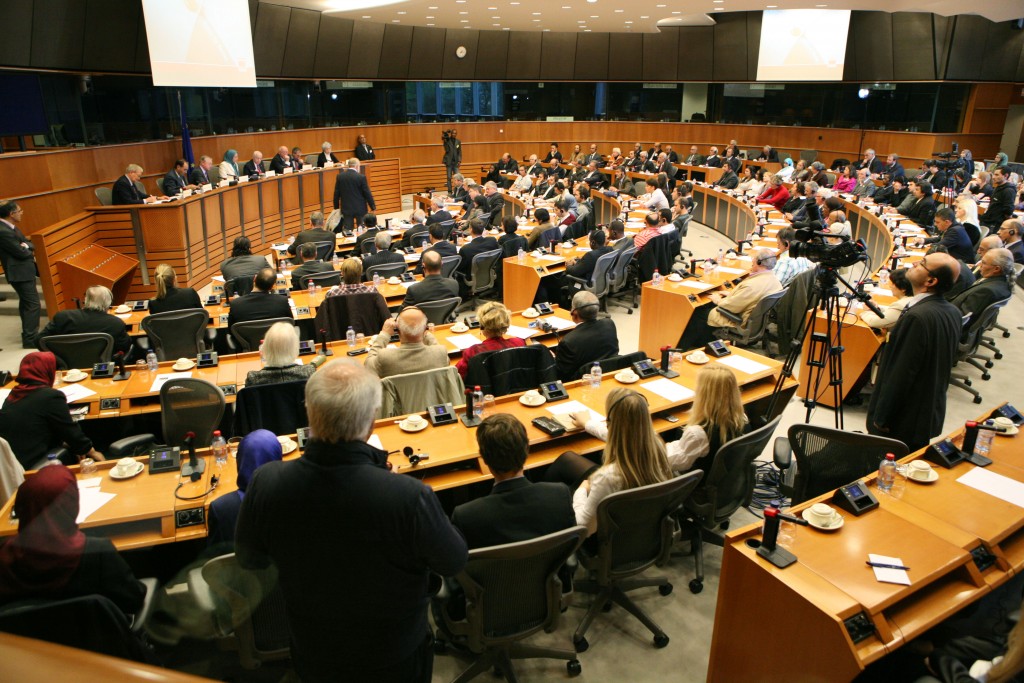 Speech to a meeting at the European Parliament

I am delighted to be here again, at the seat of democracy in Europe.
The presence of personalities and elected representatives in the U.S. and Europe, with us here today to discuss a solution for protection of residents of Ashraf and to end dictatorship in Iran, symbolize the aware conscience of the world.

The message of your presence here is loud and clear:
We do not want and there should not be a repeat of another massacre at Camp Ashraf;
The siege, crackdown and blacklisting of the Iranian opposition, which is the last and the only solution to the Iranian problem, must end.

And finally, the right of the Iranian people to resist and to overthrow dictatorship for their freedom must be recognized.

Dear Friends,
Six months have passed since the Iraqi forces attacked Ashraf at the behest of the Iranian regime.
During this period, the mullahs have resorted to all sorts of attacks and pressures against the residents of Ashraf.
This reflects the critical situation which the regime is facing.

It feels threatened by growing public discontent in Iran and the wave of revolutions in the region.
To escape from danger, the mullahs are in a rush to obtain nuclear weapons.
At the same time, they have resorted to more terrorism.

Last week a major terrorist plot of the mullahs was foiled in Washington.
They also lose no opportunity to attack Ashraf.
Two weeks ago, the NCRI revealed that at the behest of Mullahs in Tehran the Iraqi government is hindering the efforts of UN agencies.

The Iraqi government wants to disrupt the UNHCR work to confirm refugee status of the residents.
The Iraqis want to make this process subject to their demands and to delay it so that they will be able to use lack of progress as a pretext for another deadly attack.

The Resistance’s sources inside the mullahs’ regime have informed us of a joint plot by the Iranian regime and Iraqi government to attack Ashraf which will lead to another massacre.
Four days ago, Iraqi newspapers revealed that the Iraqi government has issued orders for a vast offensive against Ashraf residents at the behest of the mullahs’ regime.

The Iraqi plan is to forcibly relocate the residents to an unknown place to be able to massacre them with no trouble.
Preparations are being made for this plan, such as the armament, anti-riot vehicles and a large number of buses and trucks to carry residents, against their will.

Today we have also received information from inside Iran that confirms a plan and its preparations to attack Ashraf.
Under the circumstances, the protection of the residents of Ashraf is a matter of urgency.
In this respect, the recent decision by Baroness Ashton to appoint a personal representative for Ashraf is invaluable.
On behalf of the Iranian people and Resistance, I sincerely thank her. 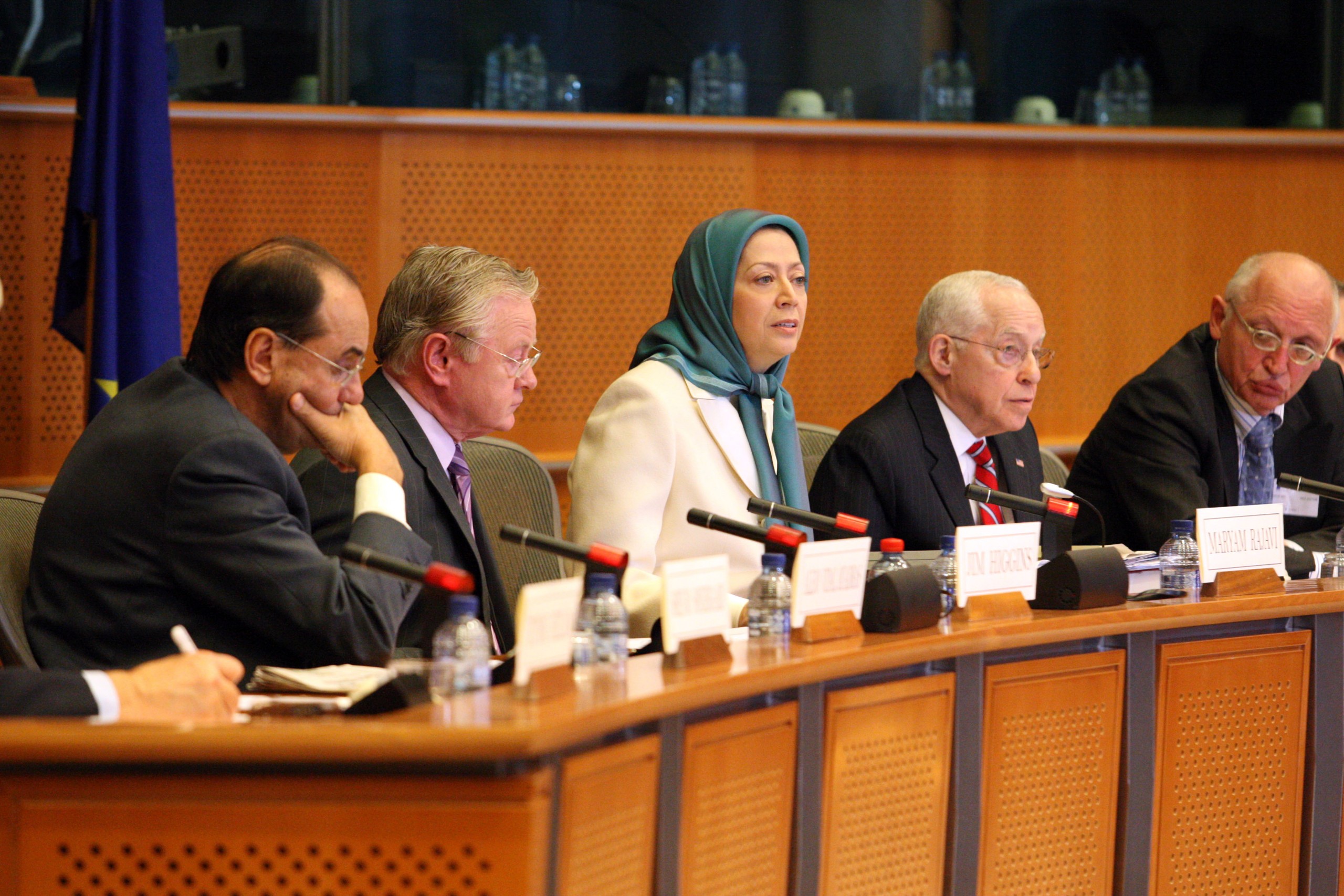 This achievement is the outcome of efforts led by Dr. Alejo Vidal Quadras, as well as Messrs. Struan Stevenson and James Higgins.

The Iraqi government, which acts at the behest of the mullahs, views the Special envoy as an obstacle to its plan to destroy Camp Ashraf.
As such, it is necessary that the Special envoy speed up his efforts to protect the residents of Ashraf.
Visiting Iraq is a step in this direction.
It is also expected that in addition to the European Parliament, Member States and the European Commission use their resources to assist the EU Special Envoy to protect Camp Ashraf.
Every year, Western governments, especially the European Union, are allocating enormous financial assistance to the reconstruction of Iraq as well as technical, training and military aid.

This enables the European Union as a major power to play a major role to enforce the Iraqi government to abide by its international obligations.
We also ask the United States to support the mission of the EU’s Special envoy.
We ask the United Nations Secretary General and the High Commissioner for Human Rights to take steps to station UN monitors at Ashraf as soon as possible.

The presence of a team of UN monitors at Ashraf until the resettlement of the residents in third countries would provide a guarantee to avert the next humanitarian catastrophe.
Regrettably, European powers have yet to fulfill their responsibility to protect.
I ask why they have remained silent regarding the Iraqi government’s unlawful deadline to close down Camp Ashraf.
Bear in mind that the Iraqi government has already committed two massacres at Ashraf.
Do EU member states want to be witness to another catastrophe about which they were warned in advance?
This deadline is intended to cause the failure of the European Parliament plan and to neutralize the efforts of the United Nations in finding a solution for Ashraf.

Western powers must work to set aside this deadline so that the UNHCR can carry out its responsibilities vis-à-vis the residents of Ashraf.
I ask Baroness Ashton, the UN Secretary General and the High Commissioner for Human Rights to voice protest over this dangerous deadline.

I also ask the United States and the European Union to compel the Iraqi government to withdraw this deadline.
Removing this deadline carries no cost for Western powers.

They can easily do it and it is the minimum which can be done to protect the residents of Ashraf.
I warn that Western silence toward this deadline is a license for the next slaughter.
I warn that time is running out.

In order to avert a humanitarian catastrophe we cannot waste time.
Let us not forget that it is the mullahs regime that is hindering the progress of Arab spring.
If the mullahs are not stopped, they would destroy what has already been achieved in these countries.
The only way to counter the mullahs is to rely on the Iranian people and their Resistance.
The international community must side with the Iranian people by supporting this resistance and not to hinder their struggle.

The people of Iran deserve a parliamentarian democracy and a republic based on separation of church and state.
They deserve a society based on human rights, without executions and a society that respects gender equality where women can have equal role in the political leadership of the country.