Swiss Court orders to investigate the murder of Dr. Kazem Rajavi as genocide 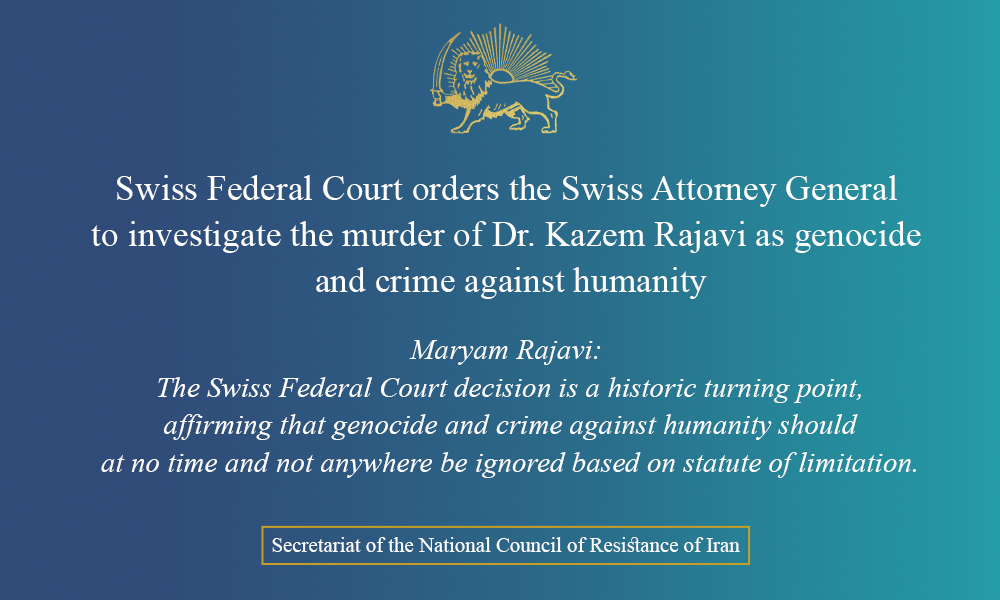 Maryam Rajavi: The Swiss Federal Court decision is a historic turning point, affirming that genocide and crime against humanity should at no time and not anywhere be ignored based on statute of limitation.

On September 23, 2021, the Swiss Federal Court ruled that a new investigation into the assassination near Geneva in 1990 of Dr. Kazem Rajavi, the representative of the National Council of Resistance of Iran (NCRI) in Switzerland, should be undertaken in the context of genocide and crime against humanity. Dr. Rajavi was assassinated following the massacre of 30,000 political prisoners in Iran in 1988.

The Federal Criminal Court ruled that according to Swiss and international law the crime committed against Dr. Rajavi was not subjected to the statute of limitation.

Mrs. Maryam Rajavi, the President-elect of the National Council of Resistance of Iran (NCRI), described the decision of the Swiss Federal Court as a historic turning point, affirming that genocide and crime against humanity should at no time and not anywhere be ignored based on the statute of limitations. This is a significant development and a legal precedent for contemporary law for all countries in five continents.

Mrs. Rajavi also called the court’s decision a necessary step in countering the unbridled terrorism of the clerical regime, adding that the assassination of Dr. Rajavi was the continuation of the execution and massacre of the steadfast Mujahedin-e Khalq (MEK/PMOI), based on Khomeini’s fatwa. The same heroes and heroines whom Kazem Rajavi defended on the international stage until his last day.

Mrs. Rajavi pointed out: The plot by the religious fascism ruling Iran to bomb a large resistance rally in Paris in June 2018, intended to cause mass casualties, as well as the murder of at least 1,500 protesters during the November 2019 uprising, clearly showed that terrorism and repression are inherent and indispensable to the ruling religious tyranny. Khamenei, Ebrahim Raisi, and other regime leaders must be brought to justice before the International Court for four decades of crimes against humanity and genocide. European governments and the United States must recognize the 1988 massacre of political prisoners in Iran as genocide and a crime against humanity.

Secretariat of the National Council of Resistance of Iran (NCRI)
September 28, 2021