Dr. Kazem Rajavi’s assassination to be investigated in the context of genocide, crime against humanity 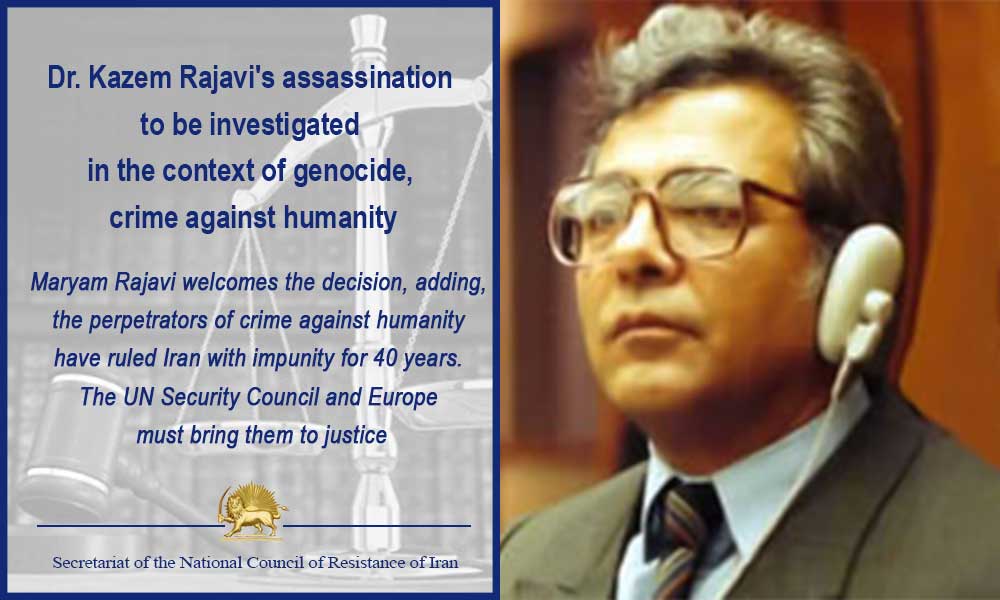 Mrs. Rajavi welcomes the decision, adding, the perpetrators of crime against humanity have ruled Iran with impunity for 40 years. The UN Security Council and Europe must bring them to justice

The case has been transferred to the Attorney General’s Office to be revisited in the context of genocide and crimes against humanity.

Dr. Kazem Rajavi was assassinated on April 24, 1990, by terrorists dispatched by the Iranian regime. In early June 2020, Vaud Prosecutor announced his decision to close the case because 30 years had passed from the assassination. The decision was met with vehement protests by the Iranian Resistance and lawyers and was widely opposed by parliamentarians, political and religious figures around the world.

In his letter to the Deputy Attorney General of the Swiss Confederation, Vaud Prosecutor stated: “It seems that the case of the assassination of Dr. Kazem Rajavi should be considered primarily as exposure and condemnation of genocide and a crime against humanity, and be only considered secondarily as a typical case of murder for a judicial proceeding.

The letter adds: “In such circumstances, the Vaud Provincial Prosecutor’s Office cannot investigate the events from the aforementioned perspectives, because in that case, it would infringe upon your jurisdiction. Based on the agreement with the Attorney General, I will forward this complaint to you as a case that lies within your jurisdiction.”

On August 21, the United States Secretary of State designated 13 of the assassins of Dr. Kazem Rajavi on the Department of State’s sanctions list. The statement reiterated, “These 13 assassins, who posed as Iranian diplomats, were acting under the highest orders of their government to silence opposition and show that no one is safe from the Iranian regime, no matter where they live. The United States will not stand for the Iranian regime silencing its critics through violence and terror.”

On March 20, 2006, a Swiss investigating magistrate issued an international arrest warrant for the then Iranian regime’s Minister of Intelligence and Security, Ali Fallahian, for his involvement in the assassination. The Fallahian’s arrest warrant stated, “Kazem Rajavi’s assassination had been meticulously planned. The commandos first traveled to Switzerland in October 1989, then in late January and early February 1990, and finally from 10 to April 24 in the same year. The investigations revealed that 13 men were involved in preparing and perpetrating the murder. They were carrying service passports stamped “on mission.” All Iranian service passports were issued by the ministry under the leadership of Ali Fallahian and were taken away from the perpetrators at the same airport when they returned to Iran. All the service passports of the 13 individuals named above were issued in Karim Khan street in Tehran. The two buildings on this street are the headquarters of part of the Iranian regime’s intelligence service, VAVAK.”

Welcoming the prosecutor’s decision, Mrs. Maryam Rajavi, the President-elect of the National Council of Resistance of Iran (NCRI), said that the assassination of Dr. Rajavi was part of the clerical regime’s plan to commit genocide and crime against humanity, which began in 1981 with the mass executions of political prisoners and climaxed in the 1988 massacre of political prisoners. It has continued until today, with hiding the martyrs’ graves, the mass murder of 1,500 protesters during the November 2019 uprising, and the brutal torture of those arrested and the executions of detained protesters, such as Mostafa Salehi and Navid Afkari. Dr. Kazem Rajavi, the great martyr to the cause of human rights, exposed this massive crime against humanity and genocide, which aroused the anger of the masterminds of the 1988 massacre.

Mrs. Rajavi added: The masterminds of the persistent crime against humanity have ruled Iran with impunity and without the slightest accountability for 40 years. The United Nations Security Council and its member states, as well as European countries, must take the necessary steps to end this impunity and bring to justice those responsible for crimes against humanity in Iran.

Secretariat of the National Council of Resistance of Iran (NCRI)
September 13, 2020