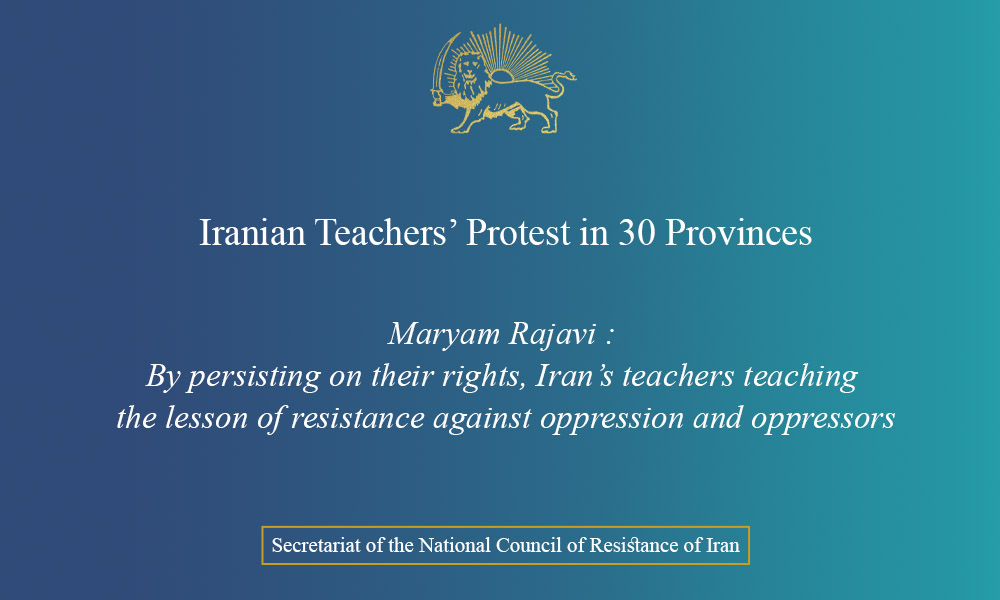 Maryam Rajavi : By persisting on their rights, Iran’s teachers teaching the lesson of resistance against oppression and oppressors

As of this afternoon, reports of protest rallies have been received from 116 cities in 30 provinces in Iran. The scheduled rallies took place outside of Majlis, the regime’s parliament in Tehran, in front of governor offices in provincial capitals, and in front of the education department in other cities.

Demonstrators chanted slogans such as: “Imprisoned teachers must be released,” “Teachers, stand up to end discrimination,” “We have heard too many promises, we have not seen justice,” “The government is betraying, the parliament is supporting,” “Teacher, shout your demands,” “Teachers die, but they will not accept humiliation,” “Neither surrender nor compromise,” “Teachers are imprisoned, looters are free,” “Every teacher’s slogan is against oppression,” and “Free education is the right of Iran’s children.”

By dispatching plainclothes agents and female members of the state security force (SSF), the regime tried to prevent teachers from holding their gathering and prevent others from joining them.

In the city of Ahvaz, the SSF attacked the teachers and beat them up. The repressive forces arrested four teachers in Mashhad, six in Ahvaz, three in Bushehr, and several others in Tehran and Shiraz.

Mrs. Maryam Rajavi, the President-elect of the National Council of Resistance of Iran (NCRI), praised the protesting teachers and educators, adding that the teachers of Iran who stepped up their protests by chants of “Teachers, rise up to eliminate discrimination” and “Free all imprisoned teachers.” By persisting on their rights, they are teaching the lesson of resistance against oppression and oppressors. Mrs. Rajavi underscored that so long as the criminal mullahs rule Iran, discrimination, poverty, unemployment, inflation, and corruption persist. They do not care the least for people’s welfare and health but only think of preserving their evil rule. The only solution for the crises in Iran is to end religious fascism and establish democracy and the people’s national sovereignty. Repression is never stronger than the solidarity among all Iranians in rising up for freedom.

Secretariat of the National Council of Resistance of Iran (NCRI)
January 13, 2022