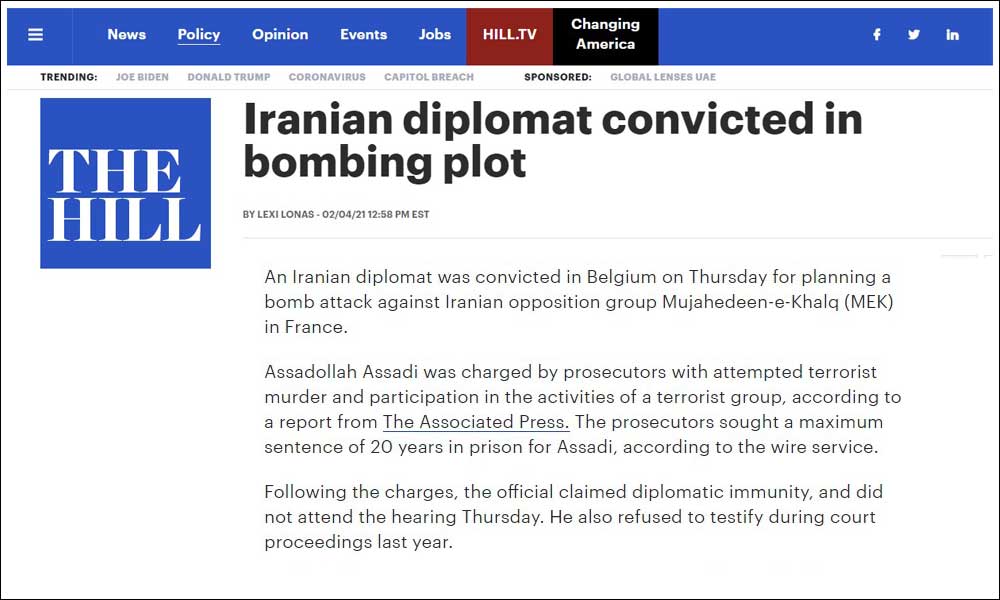 Assadollah Assadi was charged by prosecutors with attempted terrorist murder and participation in the activities of a terrorist group, according to a report from The Associated Press. The prosecutors sought a maximum sentence of 20 years in prison for Assadi, according to the wire service.

In addressing the conviction, the Belgian government said that Assadi’s actions stood on their own, separating his actions from international relations.
“What matters is that today the justice system has ruled on facts of terrorism and made a clear statement about it. And it must be able to do that in complete independence. Otherwise, we no longer live in a constitutional state,” said Justice Minister Vincent Van Quickenborne, according to the AP.

According to the AP, Assadi had transported the explosives, that were made and tested in Iran, from Iran to a Pizza Hut in Luxembourg where he handed it off to a couple who would attempt to use it at an MEK meeting.
The incident occurred in 2018 when Belgium authorities got a tip that the MEK meeting would be attacked. They caught the couple Assadi met with traveling to the meeting with explosives in France.
Assadi was arrested in Germany a day after the failed attack, with prosecutors alleging that Assadi was the “operational commander” of the attack.

Following the ruling, Saeed Khatibzadeh, spokesman for Iran’s Foreign Affairs Ministry, said that Iran does not accept Belgium’s decision against Assadi because they see the process Belgium used as illegal.

Assadi’s state immunity claims were rejected since Iran or Iranian security services were not a part of the trial. Assadi probably will appeal the decision, defense lawyer Dimitri De Beco said, according to the news outlet.
Prosecutors on the case said Assadi was operating under orders from the highest authorities in Iran, but did not offer any evidence.

MEK’s leader Maryam Rajavi responded to the court’s decision by reemphasizing that she believes Iranian President Hassan Rouhani and Supreme Leader Ayatollah Ali Khamenei ordered the attack.
She told the EU “to take action” and remove ambassadors from Tehran. Tehran denies having any involvement in the attack.