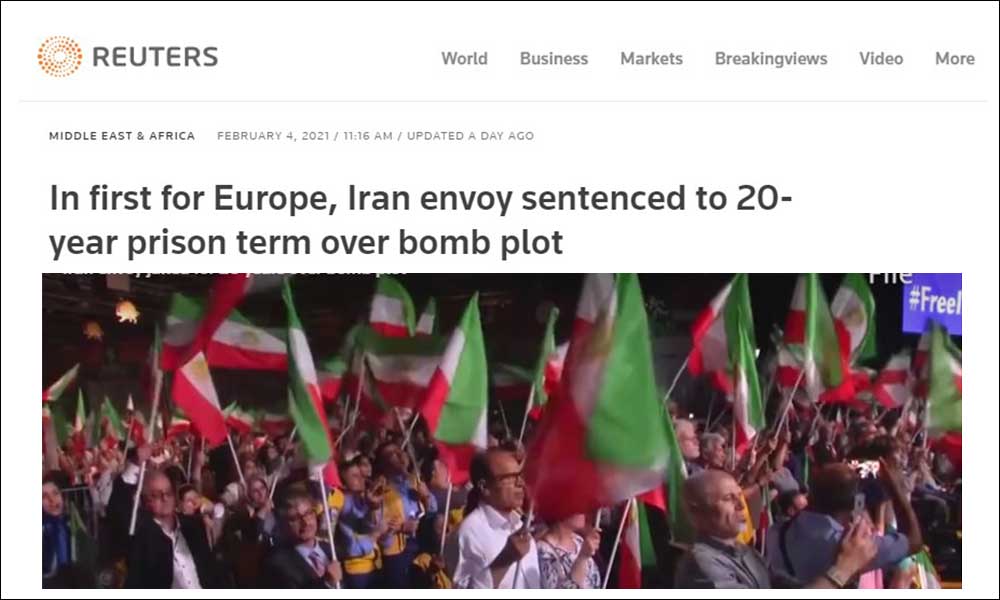 ANTWERP, Belgium (Reuters) – An Iranian diplomat accused of planning to bomb a meeting of an exiled opposition group was sentenced to 20 years in prison on Thursday in the first trial of an Iranian official for suspected terrorism in Europe since Iran’s 1979 revolution.

Assadolah Assadi was found guilty of attempted terrorism after a foiled plot to bomb a rally of the National Council of Resistance of Iran (NCRI) near Paris in June 2018, Belgian prosecution lawyers and civil parties to the prosecution said.

The third counsellor at Iran’s embassy in Vienna, he was arrested in Germany before being transferred to Belgium for trial. French officials said he was running an Iranian state intelligence network and was acting on orders from Tehran.
Assadi did not attend his hearings, which were held behind closed doors under high security, and neither he nor his lawyer have commented.In March, Assadi warned authorities of possible retaliation by unidentified groups if he was found guilty, according to a police document obtained by Reuters. The courtroom was heavily guarded, with armoured vehicles outside and police helicopters overhead.

Prosecution lawyer Georges-Henri Beauthier said outside the court in Antwerp: “The ruling shows two things: A diplomat doesn’t have immunity for criminal acts…and the responsibility of the Iranian state in what could have been carnage.”

COMMERCIAL FLIGHT
Investigators assessed that Assadi brought the explosives for the plot with him on a commercial flight to Austria from Iran, according to Belgium’s federal prosecutor.Then-U.S. President Donald Trump’s lawyer Rudy Giuliani gave the keynote address at the rally, which was attended by diplomats from many countries.

The ruling came at a sensitive time for Western relations with Iran. New U.S. President Joe Biden is considering whether to lift economic sanctions on Iran reimposed by Trump and rejoin fellow world powers in the historic 2015 accord with the Islamic Republic aimed at containing its nuclear programme.
While the European Union has imposed human rights sanctions on Iranian individuals, Brussels has sought closer diplomatic and business ties with Tehran.

But it says it cannot turn a blind eye to terrorism, including the two killings in the Netherlands and a failed assassination attempt in Denmark, blamed on Iran.
“This case is not an aberration but rather is part of a pattern of the Islamic Republic’s terrorism in Europe and around the world,” said Toby Dershowitz at the Foundation for Defense of Democracies, a nonpartisan think-tank in Washington D.C.

Three other Iranians were sentenced in the trial for their role as accomplices, with 15-, 17- and 18-year sentences handed down respectively by three judges who did not comment on Thursday. One of their lawyers said he would recommend an appeal, although it was not clear if Assadi would do so.

In an interview with Reuters, NCRI chief Maryam Rajavi called the ruling a turning point as it proved Iran was carrying out state-sponsored terrorism. She said the EU could not stand by without reacting even if some in the 27-nation bloc were pushing for more dialogue with Tehran.
“Silence and inaction would be the worst policy and embolden the regime in its behaviour,” she said, speaking through an interpreter, calling for EU sanctions on key officials, including Foreign Minister Mohammad Javad Zarif, who heads up nuclear diplomacy with the major powers.
“The European Union and governments must hold the regime accountable,” Rajavi said.
The EU declined to comment. French officials did not immediately respond to request for comment.

Reporting by Clement Rossignol in Antwerp and Robin Emmott in Brussels with additional reporting by John Irish in Paris and Parisa Hafezi in Dubai; Editing by Marine Strauss, Philippa Fletcher and Mark HeinrichOur Standards: The Thomson Reuters Trust Principles.