Maryam Rajavi: End impunity for the most dangerous terrorist state 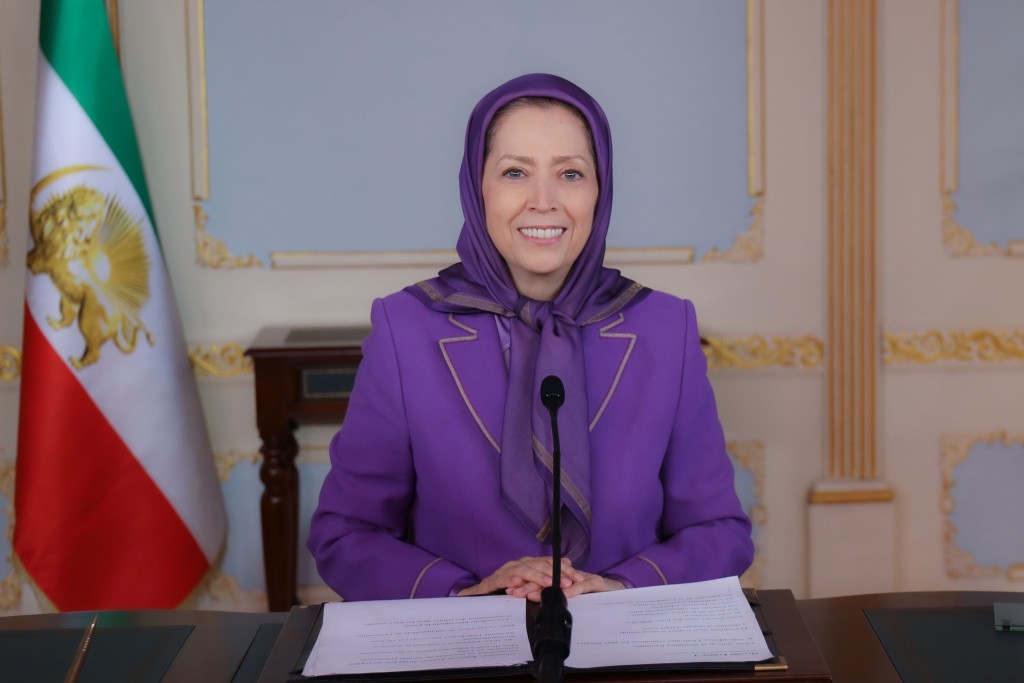 Dear friends of the Iranian Resistance,
I send you my sincerest greetings. And I express my respect and gratitude to every one of you.
You are the friends of the difficult days the Iranian Resistance has endured. Your courageous positions have always impacted the fight against religious fascism, which unfortunately has the support of the appeasers in the West. The regime will continue its repression, terrorism, and its quest for nuclear weapons until the day it is overthrown.
For many years, Western governments claimed that they appeased the clerical regime to support the moderates. Of course, we said from the outset that moderation in the ruling religious dictatorship is a big lie.

But the advocates of appeasement used this lie to justify their policy of supporting religious fascism. Now the mullahs have put away the mask of moderation. Instead, Khamenei has appointed one of the executioners of the 1988 massacre as the regime’s president.
Still, the advocates of appeasement continue to embrace the mullahs’ regime.
Ebrahim Raisi was directly involved in the massacre of thousands of people. He must be prosecuted instead of being invited to the negotiating table.
And now, this criminal is scheduled to attend the UN General Assembly in New York. It would be a shame for humanity to allow a criminal whose hands are stained with the blood of thousands of innocent prisoners to address the General Assembly.

The executions have doubled since Raisi took office as the regime’s president.
The repression of women has taken on new heights, and the arrests of the followers of various religions have surged.
Khamenei appointed Raisi to thwart the advancement of uprisings and the Resistance Units by killing and cracking down on population. His scheme, however, failed.
In recent months, the Iranian people’s protest movement against high prices, unemployment, poverty, water shortages, oppression, and discrimination has continued.
The regime has never been so weak but even in this situation, Western governments have granted impunity to the mullahs in various areas.

Khamenei, Raisi, and other regime leaders have been involved in the 1988 massacre of 30,000 political prisoners but they have remained immune from prosecution and punishment.
In 2019, Khamenei ordered the massacre of protesters. At least 1,500 innocent young people were killed. In this case, too, the mullahs have enjoyed impunity.

The mullahs provoke war and commit crimes in the neighboring countries. They fire missiles at these countries and send drones because they remain immune from serious international response.
The most recent example is the treaty between Belgium and the Iranian regime to exchange prisoners.
Based on this treaty, the Belgian government intends to send a diplomat-terrorist back to Iran. The same man led the plot for the massacre of participants in the Iranian Resistance’s summit in Villepinte, near Paris in 2018.

The treaty, whose real objective was the release of this terrorist and was in reality approved to facilitate a disgraceful exchange, amounted to a law that granted impunity to the mullahs’ state-sponsored terrorism.
The result is clear:
The Revolutionary Guard Corps (IRGC) and the Ministry of Intelligence will expand their terrorism in Europe.
Inside Iran, every European citizen will become a potential hostage with whom they would exchange the arrested terrorists.

But as the Iranian Resistance’s leader, Massoud Rajavi, pointed out, the proper reaction is “to confront the mullahs’ hostage-taking and blackmail, by moving to prosecute Ebrahim Raisi, the henchman of the 1988 massacre, for crimes against humanity, war crimes, and genocide.”
We must ask if tomorrow the mullahs were to blackmail all the people of Europe with an atomic bomb, what would Europe do? Will Europe surrender? So, where are the lessons and experiences of appeasement of, and war with the Nazis?
It is time for different nations, especially in Europe and the U.S., to stop turning a blind eye to the regime’s dozens of terrorist activities.
The mullahs’ embassies, centers of espionage and terrorism, must be closed.
Political and economic relations with this regime must be predicated on a halt in executions and export of terrorism.

The Ministry of Intelligence and the IRGC must be designated as terrorists, their agents must be prosecuted and deported, and their European citizenships must be revoked.
It is time for the international community to hold the mullahs’ regime accountable.
Thank you all very much.