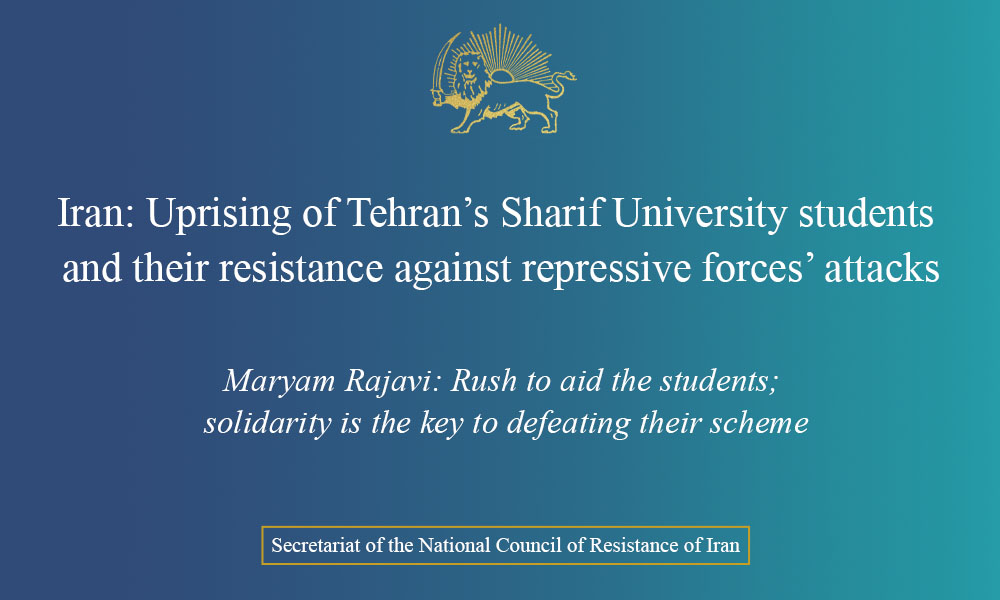 Mrs. Maryam Rajavi: Rush to aid the students; solidarity is the key to defeating their scheme

On Sunday night, October 2, 2022, the suppressive forces of the clerical regime, fearing the spread of student protests, surrounded Sharif University of Technology in Tehran, injured several students after opening fire and arrested many others. However, the students stood up against the regime’s security forces with remarkable resistance.
On Sunday evening, many people from Tehran rushed to Sharif University. The suppressive forces, including Special Anti-Riot Units, State Security Forces (SSF), and plainclothes agents were not allowing the crowd to approach the university; still, the people rushed to aid the students by chanting “Shame on you! Shame on you!” and “Free the students!” The suppressive forces fired tear gas at the protesting people.

Mrs. Maryam Rajavi urged Tehran’s youth to aid the Sharif University students and said, “Do not leave them alone; solidarity is the key to defeating their scheme.”
Meanwhile, reports indicate the continuation of the uprising in other parts of Tehran, including Shariati Street. The youth on Shariati Highway and in the subway station confronted the suppressive forces and chanted “Death to the dictator!” The criminal agents of the special anti-riot and plainclothes units were trying to disperse the people by firing shotguns. In the Iranian capital’s Teymouri district people took to the streets and blocked the road. Protesters also confronted the suppressive forces in Valiasr, Piroozi Boulevard, and many other districts of Tehran.

Secretariat of the National Council of Resistance of Iran (NCRI)
October 2, 2022