Maryam Rajavi: Freedom and people’s sovereignty are within reach more than ever 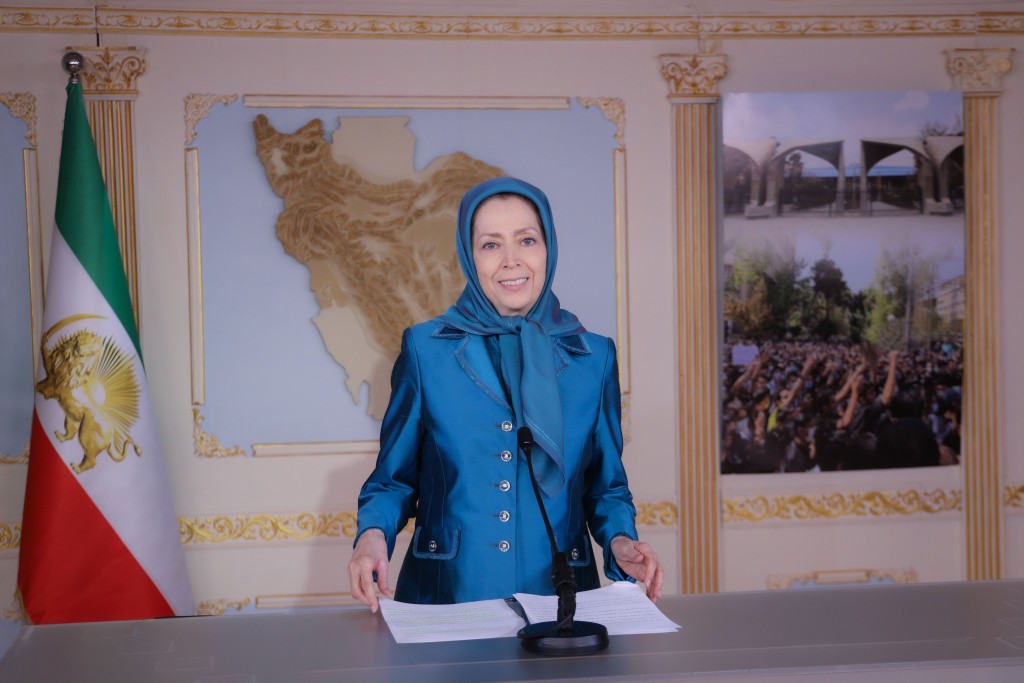 You demonstrated the prominent position of “university” as a bastion of freedom against the Shah and the mullahs. Such a brilliant history began in December 7, 1953, and continued to the 1979 Revolution that toppled the Shah and the struggle against the mullahs’ religious tyranny, culminating on September 27, 1981, with thousands of university and high school students laying down their lives for freedom.

The high price of freedom

On that day, the People’s Mojahedin of Iran (PMOI/MEK) paid the heaviest price to break the spell of Khomeini’s repression. They chanted the historic slogan, “Khomeini, your overthrow is arriving,” at a time when no one dared to oppose Khomeini.
Since that day, from the sacrifice of Iran’s best and brightest has evolved to spread the slogan of “Death to Khomeini” among the people.
According to eyewitnesses, more than 1,800 university and high school students supporting the PMOI/MEK were executed until the following day in Tehran alone.
The clerical regime announced the names of only 815 of them in its newspapers. Firing squads executed 942, some were hanged, and at least 33 were killed under torture.
I want to remind you of what I heard and read on the regime’s television and press in those days so that the high price of the 40-year quest for freedom will become a little clearer. Later, this information was published in the Mojahed publication.

The “Butcher of Evin,” Assadollah Lajevardi, with the typical boasting of executioners, said, “Within two hours of the arrest, the trial ends, and the sentence is issued and carried out.”
Khomeini’s religious judge, mullah Mohammadi Gilani, the father of three PMOI members, said: “Shoot those who engage in armed demonstrations in the streets on the spot! Right there, in front of the wall. The wounded should not be taken to the hospital; they should be finished off. They must be killed in the worst possible manner, hanged in the most disgraceful way, and their right hand and left foot must be cut off.”
Mullah Moussavi Tabrizi, who later pretended to have become a reformist, said: “Their captives must be killed, and their injured must be further wounded so that they are killed. Anyone who stands against the system is punishable by death.”
Mullah Ali Meshkini, one of the chief clerics in the Assembly of Experts, also said: “Whoever revolts against the Islamic government in the streets or anywhere else, must be sentenced to death on the spot.”
Akbar Hashemi Rafsanjani, the then speaker of the mullahs’ parliament, brazenly said: “Four verdicts are binding on the Mojahedin: They must be 1- killed, 2- hanged, 3- Their hands and feet must be cut off, and 4- They must be banished from society.”
Rafsanjani said, “If we had arrested and executed 200 of them on the first day of the revolution, they would not be so many today.”

Seven and a half years later, Khomeini’s heir apparent, Hossein Ali Montazeri, replied in a letter to Khomeini that led to his sacking from being his successor. In the letter, he said, “The PMOI/MEK are not simply individuals. They represent an ideology and a school of thought. They represent a line of logic. One cannot resolve this through killing; killing will only propagate and spread them.”

University, the bastion of freedom

Yes, you are today’s rebels, the historical continuation of the protestors of those days.
The scenes of your protests today recall the days of students’ rage during the July 1999 uprising. They remind us of your slogans during the uprisings of December 2017-January 2018, chanting, “principlists, reformers, the game is now over.”
Then we reached the uprising of November 2019, with at least 1,500 martyrs. It presented a comprehensive model of rebellious cities, districts, and streets for the regime’s overthrow. As Massoud [Rajavi, the leader of the Iranian Resistance] declared, it should be your playbook in the current uprising.

And you demonstrated that, as he said, “Our generation is determined to sketch a new future for Iran, free of exploitation, ignorance, repression and chains.”
In the uprising of January 2020, you chanted, “Death to the oppressor, be it the shah or the [mullahs’ supreme] leader.” You echoed the Iranian people’s rejection of both religious and monarchical dictatorships and their demand to establish a democratically elected republic.
Now, these days, at the beginning of the new academic year, you echo the same popular will hand-in-hand with protesters in cities all across Iran.

Teachers carry the torch of awareness

It is common knowledge that from the outset, the mullahs’ religious dictatorship based its rule on ignorance, crime, violation of freedoms, and an onslaught on the universities.
The regime launched a cultural coup in 1980 and cracked down on universities. Subsequently, it specified a quota for every university to admit members of the IRGC paramilitary Bassij and security forces’ agents. They thus tried to transform these bastions of awareness and revolution into centers of silence, submission, and passivity.

However, pioneering students in high schools and universities showed that the flames of freedom and rebellion against tyranny cannot be extinguished and will continue to blaze.
At the beginning of the academic year, we honor the courage and perseverance of teachers and educators who held nationwide protests throughout the past year.
They did not relent in the face of the clerical regime’s oppression, discrimination, and repression. With the slogan of “Death to Raisi,” they cried out that the only way to achieve the teachers’ rights and freedoms and those of all Iranians is to rise up and overthrow the regime.

Despite warnings and threats by security services and hundreds of arrests, they staged 3,000 strikes, sit-ins, and more than 10 nationwide protest gatherings in different cities and provinces.
Yes, teachers are the standard bearers of awareness. In this field, too, they teach the lesson of freedom and steadfastness. Teachers said, “Today’s lesson is freedom.” And their students replied, “Dear teacher, although you don’t have guns, you do have students.”

The lasting lesson is standing to the end to achieve freedom

Let us remember the 13-year-old Fatemeh Mesbah, executed in mid-September 1981, and her sister, Ezzat, executed shortly before her, at age 15. Their brothers also laid down their lives for freedom; Asghar, 17; Mahmoud, 19; and Akbar, 20, with his wife, Khadijeh. Their memory will last forever.
They were six of the eight martyrs of the Mesbah family in Yazd. Their parents were also executed in March 1981.

Yes, this is the high price of freedom I mentioned earlier.
These martyrs are the beacons who show the path for successive generations in a life and death struggle against religious fascism so that those who come after them would not surrender to tyranny and servitude.

I salute Iran’s young men and women. Not only have they refused to surrender to the mullahs’ dictatorship, but also, they have turned every street into a defiant bastion to attack the mullahs’ rule.
Those who sacrificed their lives for their country’s freedom believed that no power on earth could deny freedom to humankind.

Yes, the lasting lesson in the history of Iran and the world is to stand to the end to achieve freedom. Saba Haft Baradaran taught the same lesson when she was killed in Camp Ashraf, Iraq, on April 8, 2011.
At the beginning of the new academic year, my message to students and all the courageous youths of Iran is to be the “little black fish” of your time.
Initiate rebellion and uprising and be inquisitive.
Defy helplessness and despair with a profound belief in change.
Iran has set her sight on your extensive force of hope and perseverance.
Freedom and people’s sovereignty are within reach more than ever.