Maryam Rajavi: The Prerequisite for Obtaining the Violated Rights of Workers Rests in the Struggle against the Entire Anti-labor Regime 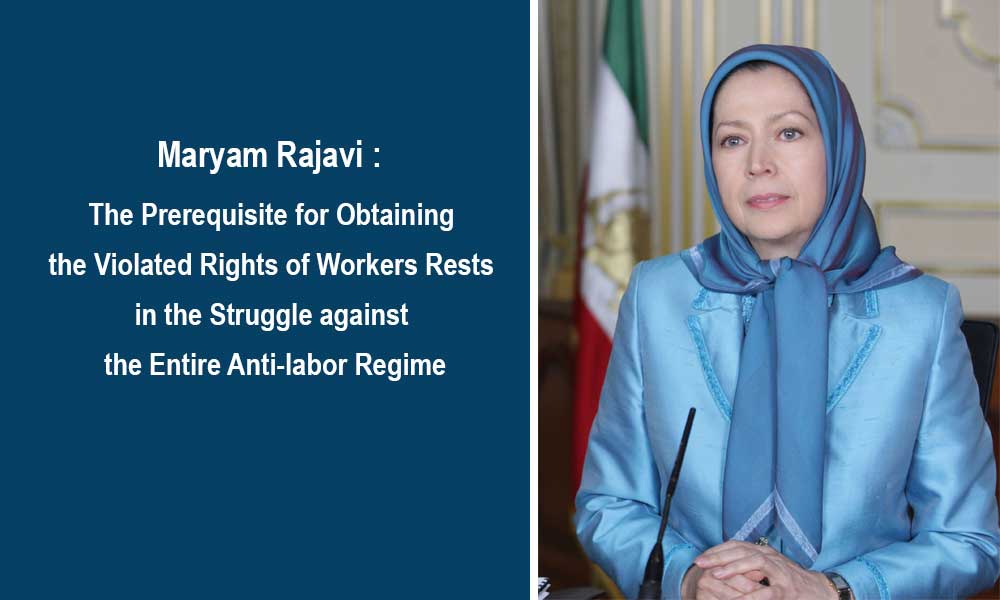 Workers and Toilers of Iran,
Sisters and Brothers,

I congratulate you on the occasion of International Workers’ Day, which holds the promise of liberation and victory for workers and the elimination of exploitation and injustice.

Congratulations to the courageous and justice-seeking workers, who are standing up face-to-face with the anti-labor regime through relentless protests and strikes.

On the opposite side stands the velayat-e faqih regime (absolute clerical rule) accompanied by the criminal and bandit enterprise of the Islamic Revolutionary Guard Corps (IRGC), representing the force of devastation, waste and obliteration of the country’s resources. You are confronting them as the builders and the progressive forces of Iran.

Defeating this regime and obtaining freedom and social justice will be possible through the struggle waged by you and all the arisen people of Iran in the great army of liberation; the army of the impoverished, unemployed, homeless, the displaced and flood victims.

Over the past year, the waves of layoffs and unemployment instigated and intensified by the clerical regime have victimized scores more in the ranks of workers.

The clerical regime has intensified the menacing policy of short-term labor contracts and reduction of workers’ wages in Iran, to the extent that temporary contracts have been imposed on 96% of the workers, rendering Iran’s working class as one of the lowest paid labor forces in the entire world.

According to the regime’s own officials, hit with a 40% inflation rate, “83% of workers are living under the line of death.” Even these low wages, which represent a vast dividing line with minimal requirements of livelihood, are not paid for months and “some factories deduct losses resulting from lack of operations due to power outages from employee paychecks.”

For its part, the Social Welfare Organization, whose earnings are funneled to regime factions, takes 30% of worker and employer earnings and benefits. It, therefore, has a significant share in robbing and stealing what little workers earn.

At the same time, female laborers bear the brunt of layoffs, anti-labor practices, and low wages.

Where else can we find conditions like those that are prevalent in Tehran’s brick ovens, where women and children receive almost $2 in exchange for a 17-hour shift of grueling work?

Even more painful is the fate of children in southern Tehran who are forced to scavenge through garbage. According to state-run media, the mullah-run municipality in Tehran uses these children in what has been called an act of slavery in southern districts of the capital.

In reality, the mullahs rank at the top of global mass robbery and brutal exploitation. As the Iranian Resistance’s Leader, Massoud Rajavi, has said: “The most barbaric brand of exploitation and injustice against workers appears in our homeland. It would hardly count as an exaggeration to claim that these inhumane circumstances resemble those that were ubiquitous in the Medieval Ages.”

In the midst of shutdowns and an extreme recession gripping manufacturing units, not to mention the extensive wave of forced unemployment, the floods of the past several weeks have dealt a devastating blow to infrastructure and facilities in the southern and western regions of the country. Once again, the primary victims were workers and toilers. The regime’s officials try to portray these disasters and ensuing damages as insignificant. But workers and farmers, and the entire impoverished population, continue to feel the bitter realities deep in their skin and bones.

But it is the right of workers and farmers and all disaster-stricken people to be compensated for damages they have experienced out of the seized assets of the Iranian nation.

Of course, a regime that has withheld government and military resources meant to save flood victims will also avoid compensating for damages or respecting and guaranteeing their rights. And, once again, it is the workers, farmers and their unprotected families whose lives will be devoured by the vicious cycle of poverty and ruin.

However, despite all these intolerable pressures, despite the barbaric exploitation inflicted by the clerical regime that shatters the physical and psychological well-being of workers, and despite the whip of suppression striking their bodies, workers and toilers of Iran will neither rest nor surrender, and they have shown as much with their protests and uprisings over the past year. They can rely on the ongoing support and solidarity of women, youth, students and all the disenchanted sectors of Iranian society.

They will unite, they will protest, strike and rise up, and they will eventually upend the prevailing instruments of oppression and suppression by overthrowing the clerical regime. On this path, one can and must overpower the regime’s intimidating policies and divisive ploys.

The prerequisite for obtaining the violated rights of workers is the struggle against the entire anti-labor regime.

The progress of the organized resistance and the accelerating trend of domestic and international developments have brightened the prospects of the regime’s downfall and the subsequent triumph of the Iranian people.

Hail to Iran’s workers and toilers.