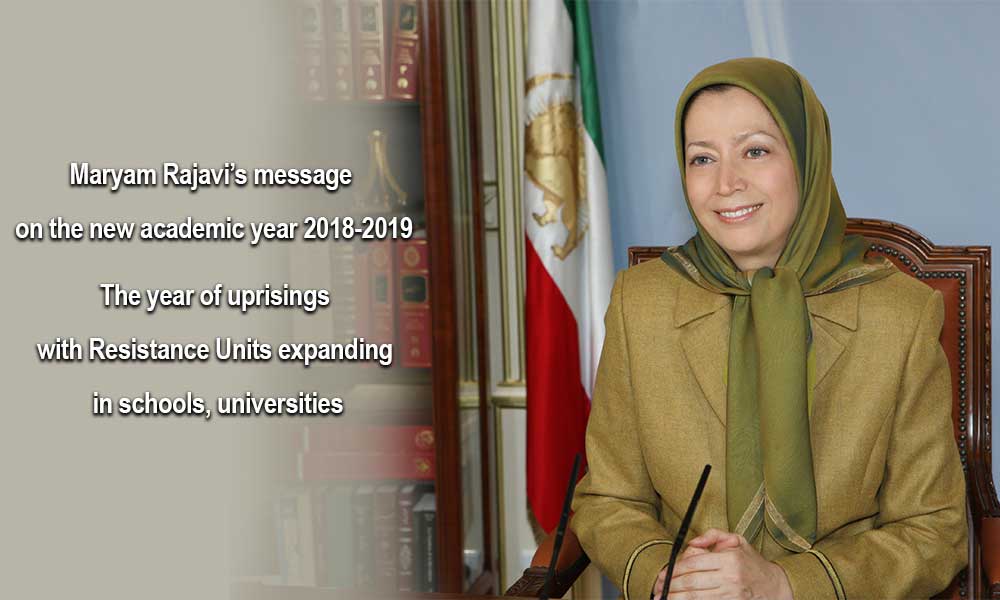 I salute all of you in the beginning of the new academic year, and commend you for your desire and determination in achieving Iran’s freedom and progress, and in bringing up a generation that yearns for the establishment of a society based on freedom, democracy and equality.

On the eve of September 27, let us remember and pay tribute to the generation of Iranian youths who created a glorious battle on this day in 1981. Let us remember Abdollah Safa, Soudabeh Pazak, Fereydoon Bakhshi and Afsaneh Shamsabadi whose names will shine for ever in the history of resistance for freedom. On that day, they sacrificed their lives to socialize the mantra of “death to Khomeini.” Hail to those shining stars of the sky of Iranian revolt for freedom.

The opening of schools and universities is particularly important this year as it is entwined with the uprisings and the protest movement.

The uprisings in 142 cities last December-January, the uprisings in at least 27 cities in August, and the major uprisings in Tehran, Kazerun, Ahvaz, Khorramshahr, and Borazjan bear a significant message. These uprisings say that more than any other time, the best and most important lesson for Iran’s youth is freedom; the first lesson is the lesson of freedom.

The second lesson is sacrificing for freedom. 120,000 of Iran’s valiant children have given their lives in the struggle against the clerical regime, including the 30,000 political prisoners massacred in 1988, as well as dozens of martyrs and thousands of young souls who were arrested this year during the uprisings. This is the price the younger generations of Iranians have paid and will continue to pay for freedom.

And the third lesson is unity and solidarity for freedom which culminates in the formation of resistance units and councils, and advances the uprisings and the protest movement.

Today, Iran’s students as well as the education and university communities are fed up with the retarded state of schools and universities and the drastic state of economy and society.
Every year, a greater number of children and youths are left out of schools, becoming victims of barbaric exploitation. It is estimated that the number of child workers in Iran has reached 7 million.

The growing number of students, particularly girl children, leaving schools and universities pervaded by suppression, has crippled and rendered the country’s education inefficient. An estimated 25million Iranians are purely or functionally illiterate.

On the other hand, the mushrooming of universities, their plummeting quality of scientific level, and the unemployment of at least two thirds of university graduates, have made higher education a failure.

Iran’s younger generations wonder why has the country’s educational system collapsed?
What is the business of so many spies and suppressive mercenaries in universities?
Why are Iran’s honorable teachers and high school instructors so much discriminated against and suppressed? Why are the majority of them living under the poverty line?
Why are students, teachers, and professors totally stripped of their right to participate in the administration of affairs in schools and universities?
Why are they deprived of forming their associations, freedom of expression, and assemblies?

An advanced and democratic educational system can be achieved only after the overthrow of the velayat-e faqih regime (absolute clerical rule). Iranian teachers’ demands for freedom and justice, formation of their associations, end to imprisonment and exile of their colleagues, and alleviation of poverty and discrimination, all depend on bringing down the mullahs’ religious tyranny.

The right solution lies in the hands of the democratic alternative to this regime, the National Council of Resistance of Iran (NCRI). The solution lies in the hands of a generation risen in this path demanding the regime’s overthrow. As the Iranian Resistance’s Leader Massoud Rajavi has said, “The days of Khomeini’s heirs and the brutal mullahs are numbered. The dawn of freedom and justice is on the horizon.”

Fellow high school and college students,
The opening of schools and universities injects fresh force to the uprisings and the protest movement and it can besiege the mullahs’ rotten regime.

Rise up to continue the uprisings and to free your homeland occupied by the mullahs. This is what you owe to your oppressed and deprived countrymen and women and especially to the children who have been victimized by this regime.

Expand the resistance units to all schools and universities.

Turn every school and college into a resistance unit and every Iranian city into a risen and revolting city.

Freedom and victory are in your hands!