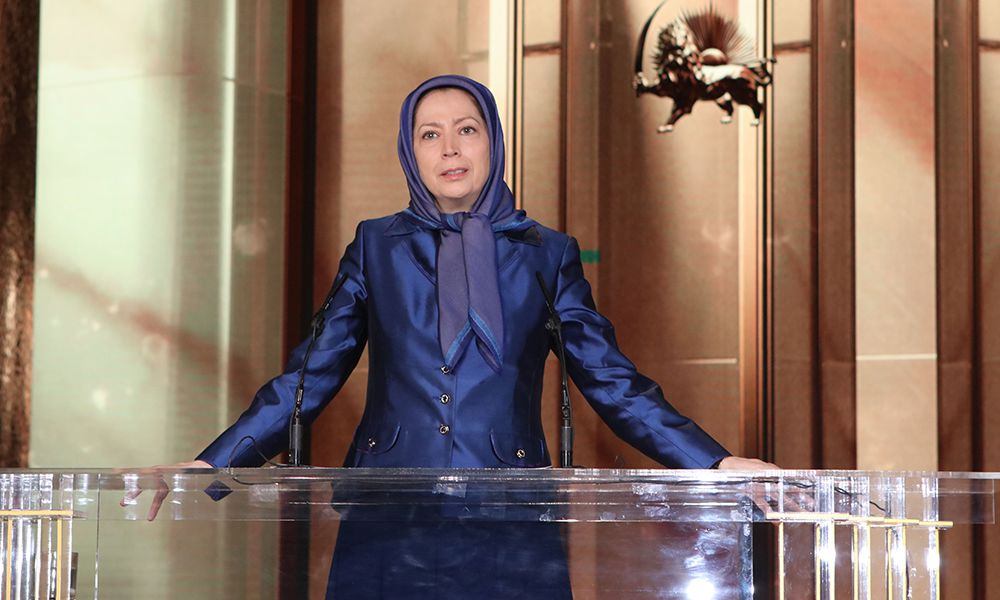 We have gathered today to honor the sixth anniversary of the epic battle of the PMOI in Ashraf on April 8, 2011, a stunning resistance and a glorious battle.

An unequal confrontation between residents of Ashraf who were empty-handed but proud on one hand, and the armed forces of the clerical regime’s puppet government in Iraq who were armed to the teeth, on the other. On that day, the Iraqi forces’ Humvees and APCs ran over the bodies of the PMOI, their bullets piercing their chests and heads. Thirty-six PMOI members gave their lives for Iran’s freedom.

In the end, however, Khamenei and Maliki were the ones who failed to conquer Ashraf. And the PMOI were proud and triumphant despite their wounds and the loss of their loved ones.

Hail to my dear fallen sisters, Asiyeh Rakhshani, Fatemeh Massih, Marzieh Pourtaghi, Nastaran Azimi, Fa’ezeh Rajabi, Mahdieh Madadzadeh, Shahnaz Pahlavani, and Saba Haftbaradaran. These heroines set the foundations of the PMOI’s new Central Council on that day by their courageous fight and endless sacrifice at the forefront of one thousand valiant women.

These heroes set up the new organization of the PMOI and once again hoisted the flag of full-fledged and selfless battle for freedom in Ashraf.

I would like to repeat Massoud (Rajavi’s) words to these martyrs when he said, “Hail to you who delivered on your promises in the most amazing and startling manner to fight with all your power… Hail to you who taught new lessons to humanity of our time, lessons that are unprecedented in the history of all nationalist, patriotic and revolutionary struggles… This is our enormous sacrifice for Iran’s freedom.”

And on behalf of myself, the PMOI and every freedom-loving Iranian, I would like to tell you that we will keep the flames of your memories and names, each and every one of you, alight and alive forever. The flame of your sacrifice will remain alight in our souls until our people will embrace their long-yearned-for freedom.

From Khamenei’s standpoint, the April 8, 2011 attack on Ashraf was a reaction to the popular uprisings in Iran, as was the case in 2009. Whenever Khamenei got stuck in the impasse of popular unrest at home, the nuclear sanctions and the war in Syria, he opted to attack the PMOI in Iraq which had been gradually occupied by the clerical regime.

In fact, the PMOI and the Iranian people’s uprising have always been identical phenomena for Khamenei.

The ruling mullahs in Iran hear the rallying cries of the PMOI, the army of freedom and the Iranian Resistance in every popular uprising which will ultimately put an end to their religious tyranny. Yes, the overthrow and termination of the mullahs’ regime is indisputable and inevitable. 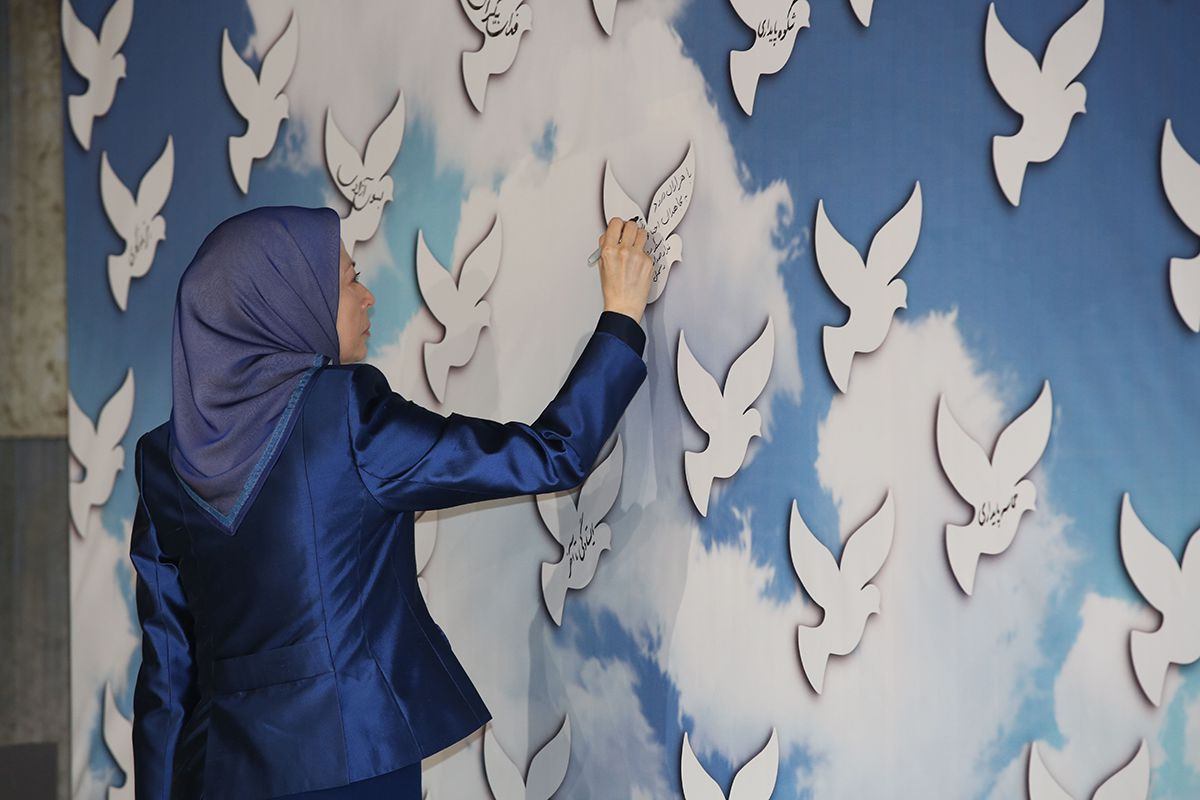 Khamenei and Maliki’s savage attack on the PMOI in Ashraf on April 8, 2011, was one of the disastrous consequences of the policy of western countries, particularly the United States, over the past 16 years which was totally in the interest of Iran mullahs. The same is true with the other six massacres carried out in Ashraf and Camp Liberty and the transfer of the protection of Ashraf to the armed forces of the mullahs’ puppet government in Iraq.

It might be interesting for you to know that on the night of the attack, the U.S. forces based in Ashraf left the camp without prior notice. Like it or not, Maliki’s forces took advantage of this measure as a green light to carry out their mission.

At exactly 11.02 p.m., Mr. (Tahir) Boumedra sent a message to Ashraf. At the time, Mr. Boumedra headed the UNAMI’s human rights office. He had sent the message on behalf of the U.S. Embassy and the U.S. State Department’s desk in charge of the case of Ashraf. The message indicated that General Ali Ghaydan (commander of Maliki’s Ground Forces) had ordered security forces to seize Ashraf’s vacant lands without harming the residents. The message explicitly emphasized that based on Maliki’s order, the security forces must not resort to violence.

This is one of the documents submitted to the International Court in Spain (which is investigating the attack). The email maintained that the Prime Minister (i.e. Maliki) had stressed that the aim of the government of Iraq is to find a peaceful solution and he hopes that a humane solution would be found for the situation…

In less than six hours, however, the attack began with armored personnel carriers and automatic weapons opening fire on the residents. It thus became clear that Maliki’s message was a sheer lie attempted to drive the U.S. unit out of Ashraf and remove all obstacles for the massacre.

The policy of silence and inaction vis-à-vis the attack on Ashraf consequently paved the clerical regime’s way for more aggressions in the region, waging war on other countries and violating their national sovereignty.

If Khomeini had not established his theocratic rule in Iran under the banner of Shiism, the world would have never experienced the phenomena of Daesh and Sunni Caliphate which were the immediate byproducts of the religious fascism innovated and initiated by Khomeini.

The reality is that most of the disasters engulfing and devastating the Middle East today were originally caused by Western governments and especially the United States’ concessions to the clerical regime in Iran.

Imagine if the recent reaction and response –to the chemical attack by Assad’s regime and the slaughter of defenseless people and innocent children– had taken place four years ago. Wouldn’t the situation in the region –with 11 million Syrian refugees and millions of homeless people– be completely different today?

Indeed, if there were not a four-year delay in responding to the chemical attacks, would the Revolutionary Guards Corps (IRGC) be able to fuel and expand its war and destruction in Syria? How could the number of deaths in Syria exceed half a million?

This is why the Syrian people and dissidents have welcomed the missile attack on Assad’s chemical centers and airbases. In contrast, the clerical regime has strongly condemned it. They tried to deny that there was any chemical attack by Bashar Assad. But if the religious dictatorship in Tehran was not involved in this inhuman crime, or had it not encouraged the Syrian dictator to carry out the attack, why would it need to conceal it?

This is the reason we declare: After years of appeasement of the Iranian and Syrian regimes, which had no outcome but more war crimes and more crimes against humanity, the disabling of the chemical centers, bases, and the machinery of war and repression in Syria must be completed by expelling the Iranian regime, the Revolutionary Guards Corps (IRGC) and its mercenary forces from Syria, Iraq and Yemen.

This is the reason we declare: Eviction of the godfather and main state-sponsor of terrorism in today’s world is the requisite to global and regional peace and tranquility and the uprooting of fundamentalism and terrorism. 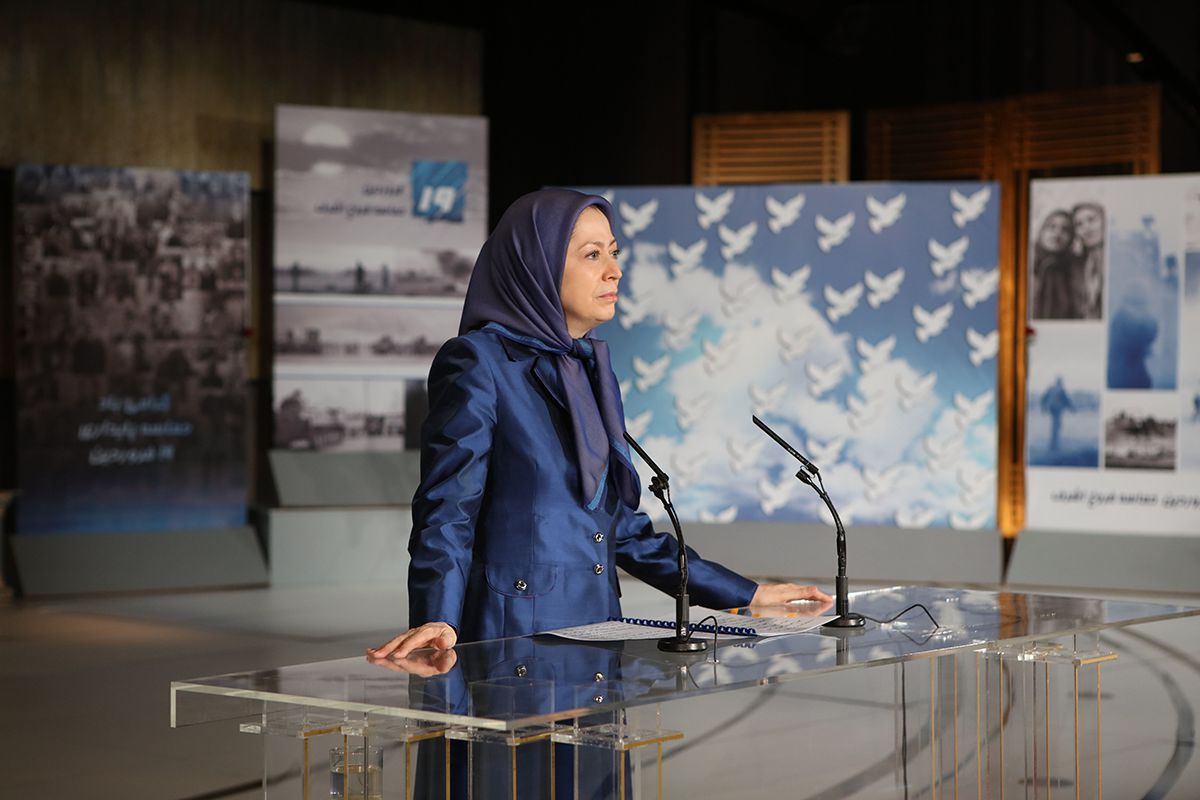 In the (Persian) New Year celebration here, when I spoke on the boycott of the mullahs’ sham election, I reiterated that the vote of the overwhelming majority of the people of Iran is regime change and the overthrow of the Velayat-e Faqih regime which has usurped the Iranian people’s right to sovereignty.

In the early days of the New Year, Khamenei said that he would confront anyone who opposes, and actually rises up against, the regime’s election.

Now, mullah Ibrahim Ra’issi, one of the principal members of the Death Commission which issued the death decrees in the 1988 massacre of political prisoners, has been nominated to run for president. No other incident could so clearly demonstrate how politically desperate the regime is in every respect.

In the wake of the milestone uprising on December 27, 2009, Ra’issi shamelessly declared, “Anyone who helps the PMOI in any form and under any circumstances is considered a Mohareb (someone who wages war on God) because the PMOI is an organized force.” In fact, he has achieved the highest levels of the regime’s hierarchy because of his utmost callousness in spilling the blood of PMOI supporters and members.

Last July, in the great gathering of the Iranian Resistance in Paris, I also said, “both factions (of the regime) failed to find a way to preserve the regime. What is more, why should the Iranian people jump from the frying pan into the fire? No! The Iranian people reject both a black and a white turban. The Velayat-e faqih regime must be overthrown in its entirety.”

And as Massoud (Rajavi) said, “The people of Iran will not be contented with anything less than the overthrow of the Velayat-e Faqih religious dictatorship and the establishment of freedom and popular sovereignty. This has always been and will continue to be the core of our nationalist and patriotic campaign against the regime.”

On the day when mullah Hassan Rouhani became the regime’s president, I declared on behalf of the Iranian Resistance, that “Nothing will change in the absence of freedom of speech and human rights. As long as political prisoners are not released and the activities of (political) parties are not sanctioned, and as long as the regime continues with its aggressive policy in Syria and Iraq… nothing will change because the Vali-e faqih (Khamenei) knows that any serious change in these policies would lead to the overthrow of the entire regime. Nevertheless, we say, go ahead and test your chances.”

Now, let us look back at what happened during the four years of Rouhani in office: Three thousand executions; the horrific mass execution of PMOI members in Ashraf on September 1, 2013; escalation of the regime’s war against the people of Syria and Rouhani’s explicit support for Bashar Assad; and exorbitant expenditures from the country’s revenues on the wars in Syria, Iraq and Yemen.

The truth is that repression and plunder at home along with terrorism and war abroad comprise the main pillars of the regime’s existence and its fundamental policies, whether the mullahs in charge wear white turbans or black turbans, whether they are charlatans or executioners.

The Velayat-e faqih regime and the religious dictatorship in Iran has no way out of its crises. The people of Iran boycott the sham election and vote for overthrow of the clerical regime.

The time has come for the Iranian people and Resistance to forge ahead and advance.

The overthrow of the mullahs’ religious tyranny and the establishment of freedom and democracy are within reach, and will be realized with the efforts of the Iranian people and youths and by setting up 1000 bastions of rebellion, i.e. 1000 Ashraf’s.

Hail to freedom,
Hail to those who gave their lives for freedom, especially the martyrs of April 8, 2011. 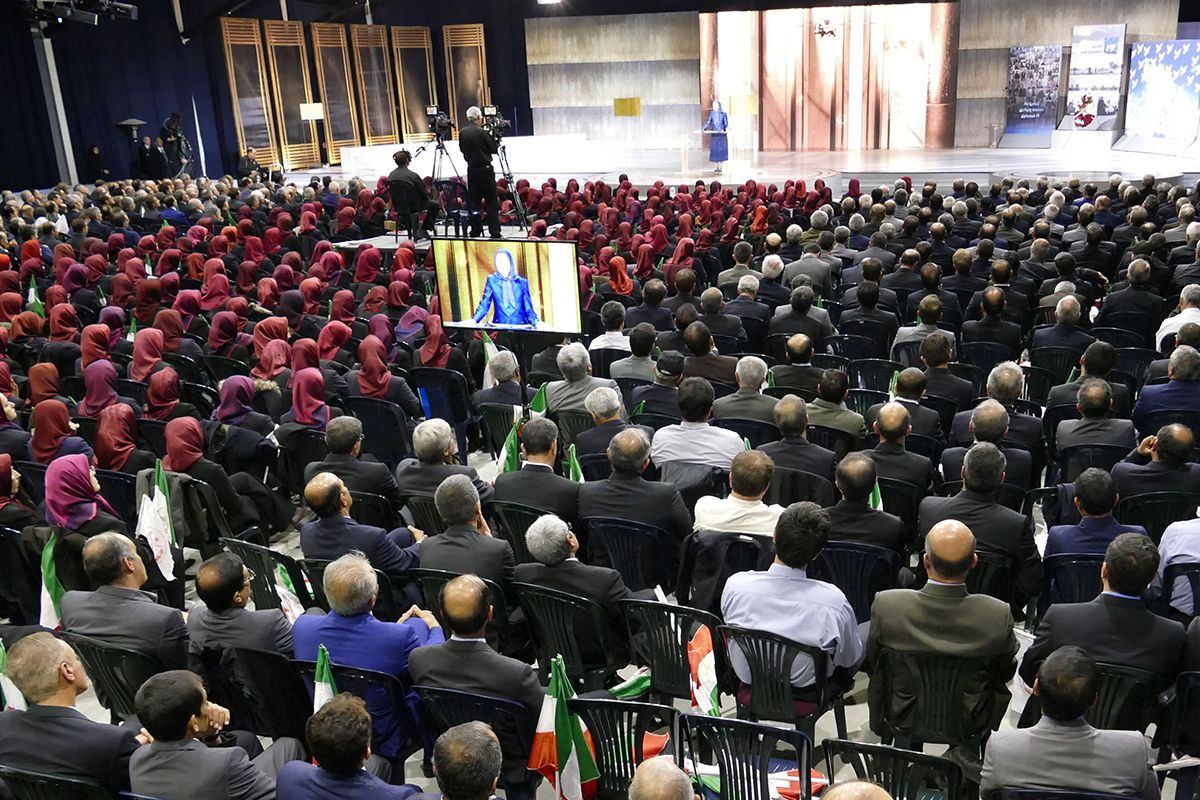