Mrs. Maryam Rajavi Meets with Members of U.S. Congress to Discuss the Uprisings in Iran 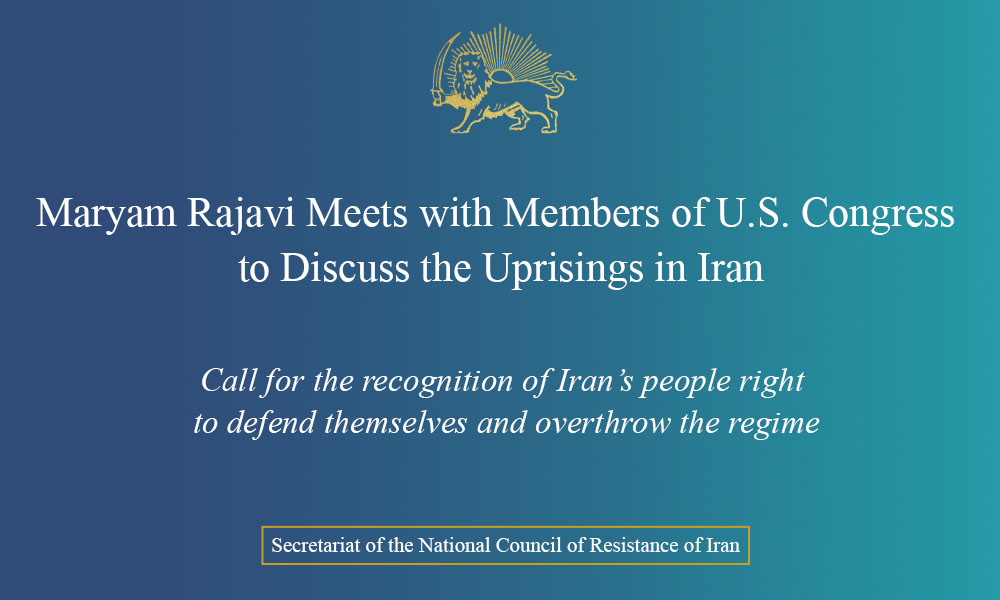 In a series of meetings this week, Mrs. Maryam Rajavi, the president-elect of the National Council of Resistance of Iran held meetings with members of U.S. Congress, including senior members of the House Foreign Affairs Committee from both sides of the aisle.

During these meetings, Mrs. Rajavi discussed the expansion of the uprisings to all 31 provinces of Iran with the goal of establishing a democratic republic based on separation of religion and state and stressed that now is the time for the world to recognize the Iranian peoples’ right to defend themselves in order to overthrow the regime.

Mrs. Rajavi emphasized, in meetings with Members of Congress that what we see in Iran today is a movement aimed at overthrowing the religious fascism ruling Iran with the goal of establishing a democratic and free republic of Iran.

During these meetings, Rep. McClintock commended the Iranian Resistance for years of struggle for freedom and expressed hope for the victory of the Iranian people, stating, we will no doubt see a free Iran. He said that there is significant bi-partisan support in U.S. Congress for the Iranian people to free themselves.

Congressman Ruiz strongly condemned the killing and arrest of the protesters and said has always been on the side of the Iranian people to ensure their human rights and women’s rights.

Congressman Gooden who had visited Ashraf 3 in 2019 said, knowing you and your movement, I want to reassure you of my full support, I have no doubt that Iran will be free, added he would do everything in his capacity to help.

Congresswoman Jackson-Lee said I have always stood by Iran’s freedom fighters, and I fully support you.

Mrs. Rajavi underlined that during these uprisings, women are leading the way, as the Iranian people challenge one of the most brutal dictatorships in contemporary history. Women equality and regime change in Iran, are the two sides of the same coin.

She said that Iranian regime has disrupted or cut off the internet in order to prevent the expansion of protests and hide its crimes. The International community must do everything to provide the Iranian people and the organized Resistance free access to the Internet.

Mrs. Rajavi stressed that despite the repression and massive killings and arrests, the regime has been unable to end the protests. The role of the Resistance Units has been key in confronting the repressive forces, ensuring continuity, and directing these protests.

Secretariat of the National Council of Resistance of Iran (NCRI)
October 1, 2022