Maryam Rajavi: The Iranian people and the organized Resistance are the decisive factors in developments pertaining to Iran 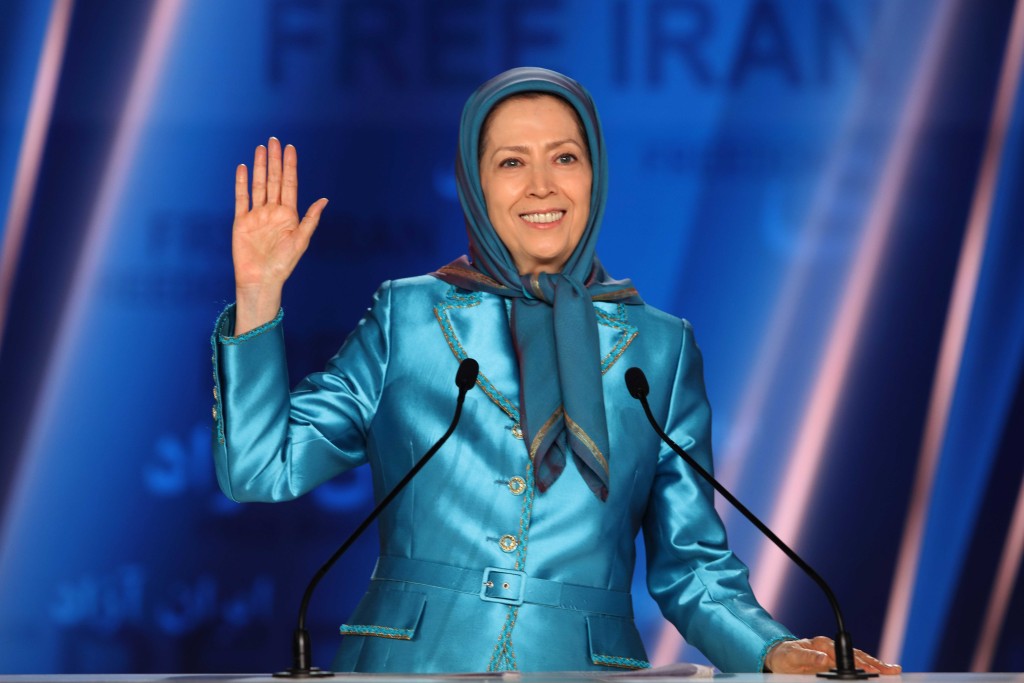 We can and must liberate Iran, the Middle East, and the world of the evil nuclear mullahs

On Monday, May 16, 2022, Michael Pompeo, the 70th U.S. Secretary of State, visited Ashraf-3, Albania, home to thousands of members of the Mujahedin-e Khalq (PMOI/MEK), and met with Maryam Rajavi, the President-elect of the National Council of Resistance of Iran (NCRI). He also visited the Museum of 120 years of Struggle for Freedom in Iran and later addressed members of the MEK in Baharestan Hall at Ashraf-3.
Maryam Rajavi addressed and welcomed Secretary Pompeo. The following is the text of her remarks:

Mr. Secretary,
Welcome to Ashraf-3, home to the Iranian people’s Resistance.
Those here today continue the Iranian people’s 120-year-long struggle for freedom. They include 1,000 tortured political prisoners during the Shah’s dictatorship and those imprisoned under the mullahs’ tyranny.
In visiting the Resistance’s Museum, you saw a glimpse of the Iranian people’s enormous pain and suffering on the one hand and their struggle for freedom, on the other.
The Iranian people and the mullahs’ regime have faced off ferociously in the past 43 years. And this fight will continue until a free democratic republic is established in Iran.
For a while, the mullahs tried to portray Iraq as the enemy. Then, they tried to portray the United States as the enemy. But the people of Iran and the MEK say that our enemy is in Iran.
The mullahs said the MEK were terrorists, a cult, and the enemies of God. They claimed the MEK did not have any base of support in Iran. There are many similar and baseless allegations.

There are two significant factors to the conflict in today’s Iran:
On the one hand, we see the regime at its weakest point. On the other, we see the people’s maximum anger and discontent. The outcome of these factors has been the progress and expansion of the organized Resistance.
The West ignored the Iranian people and their organized resistance as the decisive factor in the developments pertaining to Iran for four decades. It thus enabled the mullahs such that they are on the verge of having a nuclear bomb.
As you said last September, you are “on the right side of this fight.” You said, and I quote, “Iran will never return to rule by a dictatorial Shah or theocratic regime. The central fight is the one in the streets, and in the mosques, and in the minds of the Iranian people – it is the divide between the people and the organized opposition seeking freedom and democracy on one side and the entirety of the regime on the other. I have been in this fight on the right side for over a decade now.”

These days the price of the bread has multiplied. Thus, Iranian cities are rising one after the other against the mullahs’ regime.

Yes, by glancing at the objective conditions and the successive eruption of uprisings in Iran, today one can see that regime change is on the horizon. The people of Iran have already decided to engage in the final confrontation with the regime.
In January 2019, you said, “We must confront the ayatollahs, not coddle them.”

Appeasement or decisiveness, siding with the ruling dictators or with the people? This has been the major challenge of Iran policy over the past four decades.
The outcome of appeasing the ruling religious fascism has been the five-capital strategy, which you mentioned three and a half years ago, by referring to the situations in Iraq, Syria, Lebanon, and Yemen.
We have always insisted that appeasement and offering concessions will not contain the regime nor change its behavior. Instead, it will only provide the mullahs with opportunity and motivation to pursue their destructive policies.
Four years ago, around this time, you correctly set 12 conditions the regime had to meet to change its behavior. But the world saw that the mullahs did not accept even one of the 12 even when a so-called moderate government was in office.
The West has consistently ignored the role of the Iranian people and Resistance when formulating its policy vis-à-vis Iran. This void explains why the West was caught by surprise during the 1979 Revolution that toppled the Shah.
The Shah resorted to mass killings and martial law in the final months of his rule, but it had the opposite effect. Likewise, Khamenei appointed Ebrahim Raisi, an executioner implicated in the massacre of political prisoners, as his regime’s president, to close ranks in the face of the uprisings and save his regime.

After one year, one can certainly say that Khamenei’s dream did not come true. The regime is in a deadlock and has no future but inevitable downfall.
Therefore, the regime has found the only solution in trying to eliminate the organized Resistance and its only democratic alternative through suppression, terrorism, and the demonization campaigns. It even claims that no alternative to the regime exists.
The mullahs’ criminal regime has included you among its terrorism targets. In my view, this reflects the veracity and importance of your positions. It is a badge of honor for anyone to be targeted by the religious fascism.
Of course, the mullahs will take these dreams to their graves.

Aspirations of the Iranian people’s Resistance

Mr. Secretary,
A few days ago, the Court of Appeals in Antwerp, Belgium, convicted three agents of the Iranian Intelligence Ministry for attempting to bomb the Iranian Resistance’s annual gathering in Paris.
They acted under the command of a diplomat-terrorist who had already been sentenced to 20 years in prison.
This act of state terrorism before anything else shows the regime’s fear of the Iranian Resistance and its democratic alternative.
After the Court of Antwerp ruling, we urged the EU to cut diplomatic ties with Tehran. The experience of the past 40 years has shown that this regime does not understand any language but the language of firmness and force.
To this end, the Resistance Units have expanded across the country. Over the last Persian year, they carried out more than 2,230 anti-repression campaigns to pave the way for uprisings.
Since January, the Resistance Units have carried out several major campaigns disrupting the operations of the state-run national radio and television networks, its ministry of propaganda, and the ministry that plunders Iranian farmers.
In addition, since Thursday, the Iranian Resistance has made public valuable information it has obtained from within the regime’s Prisons Organization.
The Iranian Resistance exposed the regime’s secret nuclear and missile sites 20 years ago and alerted the world. Otherwise, the mullahs would have already obtained the atomic bomb.

Today, we warn again that one should not delay.
We say that we can and must free Iran, the Middle East, and the world of the evil of the nuclear mullahs. First, by imposing comprehensive sanctions and international isolation of the religious dictatorship. The mullahs’ regime should be placed under Article 41 of Chapter 7 of the UN Charter;
Second, by referring the dossier of human rights abuses in Iran and the clerical regime’s terrorism to the UN Security Council, particularly the files on the massacre of 30,000 political prisoners in 1988 and the killing of 1,500 during the November 2019 uprising;
Third, by recognizing the struggle of Iran’s rebellious youths against the IRGC and the struggle of the entire Iranian nation to overthrow the mullahs’ regime.
And finally, as you said, “In the end, the Iranian people will have a secular, democratic, non-nuclear Republic.”
The women and men sitting here have dedicated their lives to their last breath to this noble cause. They and their friends in the Resistance Units will one day welcome Mr. and Mrs. Pompeo in Tehran.
Thank you. 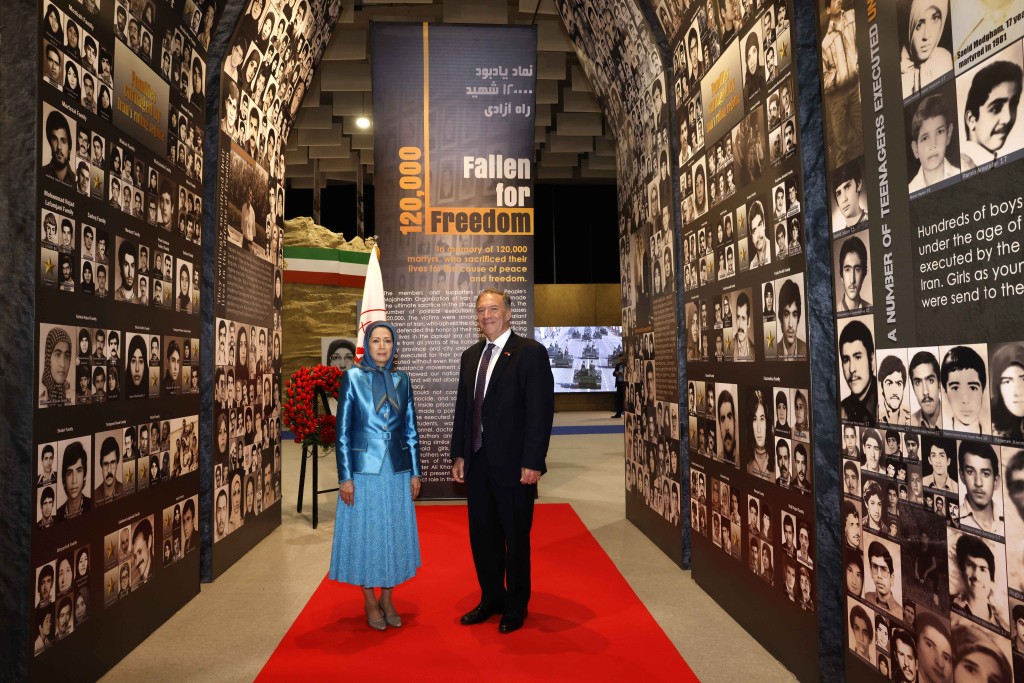