In the New Year, the world must listen to the cries of protesters in Iran 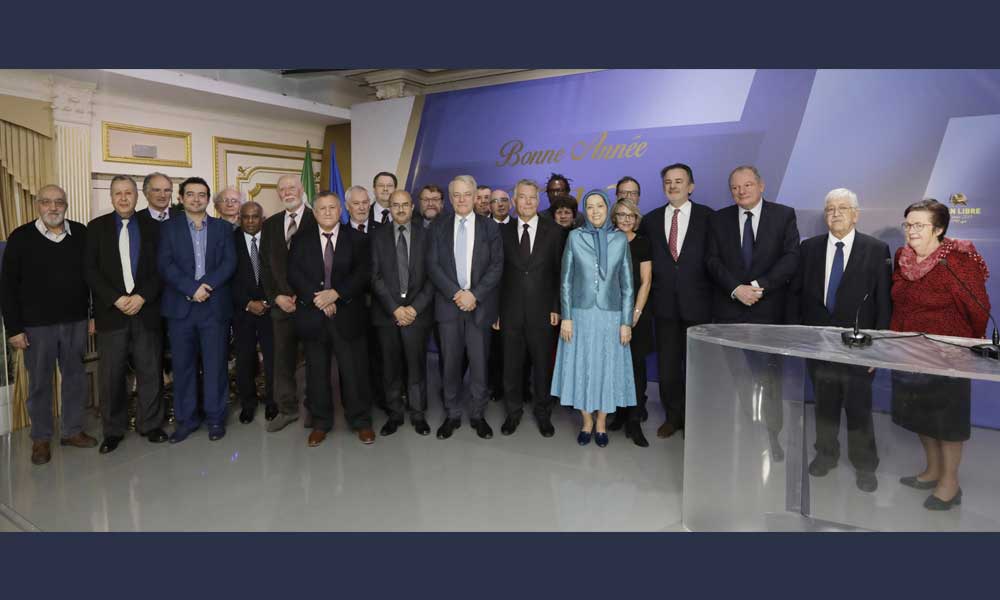 Mrs. Anissa Boumediene, former First Lady of Algeria; Mr. Dominique Lefebvre, former MP; Bishop Jacques Gaillot, a number of Paris district mayors, the mayor of Val d’Oise, and a number of French personalities participated.
Maryam Rajavi welcomed the audience and extended her New Year felicitations. She briefly reviewed the events of the past year and elaborated on the prospects of 2019. Following is the text of her speech:

I wish you all a year filled with happiness, health and prosperity.
A year when the people of France could overcome all hurdles.
Happy New Year to you who have been the friends and supporters of this Resistance in the past 15 years.
By relying on you and your support, we could endure the difficult circumstances and achieve victory.
After the June 17, 2003 attack, when you brought water and ice, and especially your love and smiles, to the hunger strikers. And after our victories in courts, you used to ask me what was it that you could do to help this Resistance and for freedom in Iran. Some of you travelled to Ashraf, to show your support to Ashraf residents. Others went to demonstrations in other countries; some others collected signatures on the streets in support of Ashraf residents.

You shared our happiness and sorrow. You cried with us for our martyrs in Ashraf and Liberty. You celebrated with us for the great relocation of Ashraf residents from Iraq. And you continued to participate in conferences and demonstrations in support of the uprising against the religious dictatorship in Iran.
Some of our friends passed away. We pay tribute to them and are proud of having had friends like them.

Today, in step with the people of Iran, we are closer to victory than any other time.
The secret to our progress over the 40 years of struggle against the religious fascism in Iran, has been persistence, perseverance and paying the price of freedom.
So, in this new year, let me wish happiness and prosperity for all the people of France.
May the New Year be a year of driving back extremism and terrorism in the world and be a year of great change in Iran.
The most significant development in Iran was the outbreak of popular protests and uprisings against the mullahs’ regime.
Everyone saw how terrified the mullahs were. They were particularly scared of the role of the Mojahedin in the uprisings.
Despite the deaths and arrests of thousands of protesters and their torture, the uprisings and protests have continued to this date.
The latest developments in December and January have been student protests in Tehran, protests of workers in Ahvaz, and protests of farmers in Isfahan. We salute their courage.

A significant development in 2018 was the unprecedented isolation of the mullahs’ on the international level.
For years, western governments especially the US had adopted the policy of appeasement of the mullahs. Although some in Europe continue to seek to placate the mullahs, the time is over for the policy of appeasement. This is a great setback to the Iranian regime.
On the other hand, the democratic alternative has made great progress.
When Ashraf residents were in Iraq, they were exposed to the danger of massacres and missile attacks by operatives of the Iranian regime. Today, however, they have built a small township in Albania, called Ashraf 3. The Resistance Units have spread throughout Iran.
These activities offer a backing to protesters. Today, the Resistance Units supporting the PMOI are the flames of hope in the darkness of the mullahs’ religious fascism.
For this reason, one can conclude that the regime has clearly regressed in status and the Resistance has obviously progressed.

The mullahs have no solution to offer for the country’s economic bankruptcy. They have no solution for the environmental disasters and for the protesters.
They are particularly bewildered in the face of the upcoming uprisings. Just recently, the mullahs’ supreme leader warned that the enemies are planning for the next year.
This is why the mullahs who are unable to confront the uprisings, have found their only way out in terrorism against the Iranian Resistance.
In 2018, they sought to carry out a major terrorist plot against the annual gathering of the Iranian Resistance in Villepinte, but they failed. They also hatched terrorist plots in Albania, the US and Denmark, all of which were foiled.

They also launched an extensive demonization campaign in the media against the Iranian Resistance. By their propaganda, they very well demonstrated who their alternative is.
In 2018, France expelled an Iranian regime diplomat and froze the assets and properties of the mullahs’ Ministry of Intelligence. This was a right step towards a firm policy.
Albania also expelled the regime’s ambassador and the Intelligence Ministry’s station chief. And the Netherlands also expelled another two diplomats of the clerical regime.
On Tuesday, the European Union announced sanctions against the Iranian regime’s terrorism and its intelligence services.

We have always urged western governments to be firm against the mullahs’ terrorist dictatorship. So, today, we urge them to expel the mercenaries of the mullahs’ Intelligence services and the terrorist Qods Force from the U.S. and Europe.
We also urge democratic countries to support human rights in Iran. The only force which could end the Iranian regime’s terrorism and belligerence is the uprising of the people of Iran with their organized resistance.
The time has come for France and the world community to recognize the right of the Iranian people’s Resistance to overthrow the theocratic regime and attain freedom.

Dear friends,
In the early days of the New Year, the world must listen to the cries of protesters in Iran.
They want freedom and democracy. They want a republic based on separation of religion and state.
I am confident that with the support of freedom-loving women and men like you, and with the endurance of the people of Iran, the Iranian Resistance will establish freedom and democracy in Iran.
Once again, Happy New Year and I wish all of you to enjoy the night.
Thank you. 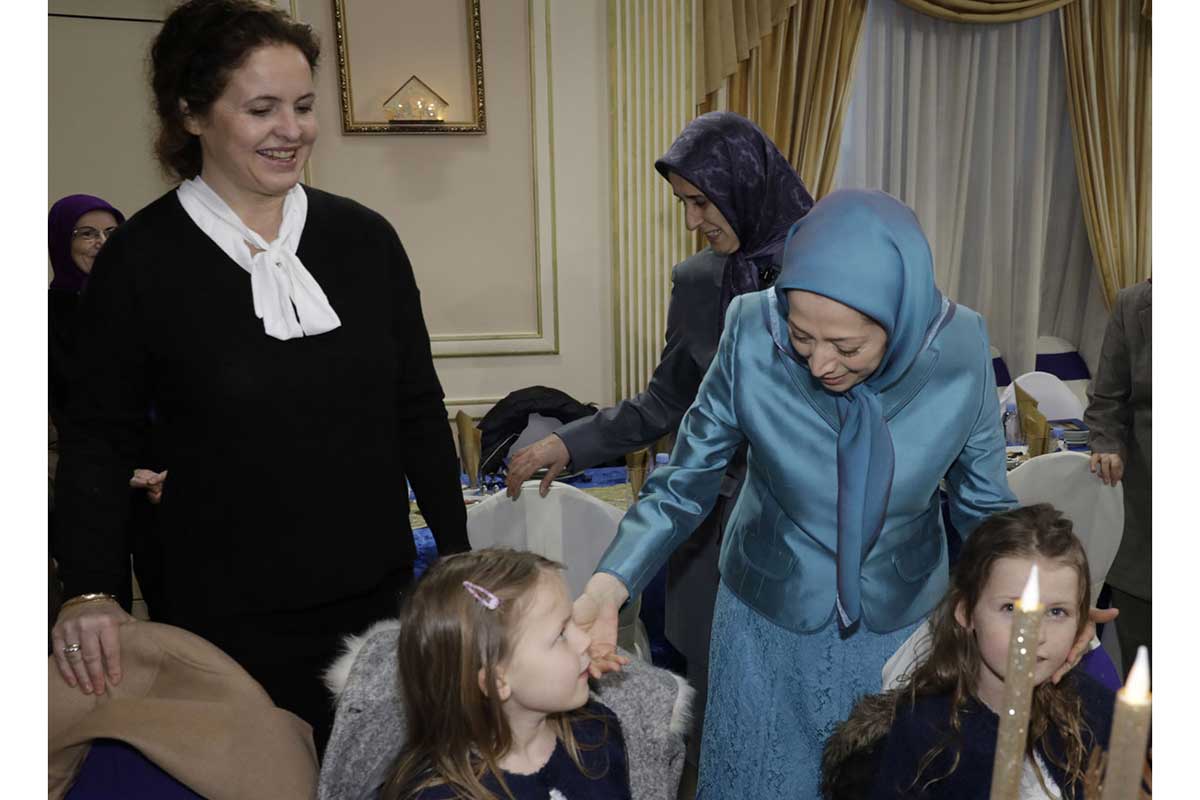