Speech at international conference in Brussels 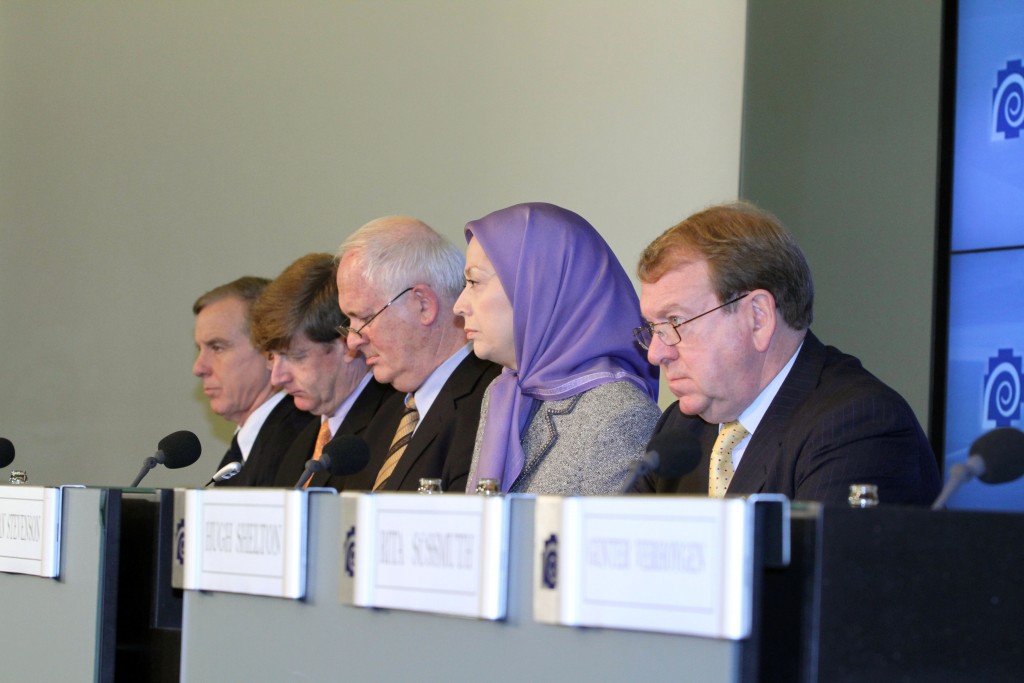 This conference is being held while the mullahs in Iran and the Iraqi government have started the countdown to a bloody massacre of Camp Ashraf.

Their main demand is the forcible relocation of the residents to close Ashraf by 31st of December.

This is according to a 7 point agreement between the Iranian regime and the Iraqi government.

Briefly the plan is: the forcible relocation of the residents to various regions in Iraq and their massacre,
as experienced during the Nazi era and in Bosnia.

I have come today to the capital of Europe to ask the European Commission, the Council of the European Union and its High Representative to use their power and good offices to prevent a crime against humanity.

I, therefore, would like to request the session of Council of Foreign Ministers which will be held tomorrow, to

• firmly oppose the relocation of the residents,
• demand the extension of the deadline
for closing Ashraf,
• and to accept any number of ill and wounded residents, in their countries.

The Iraqi government is trying to frame forcible relocation of the residents as a peaceful plan and obtain the approval or at least non-opposition of international community including the EU.

It also promises to allow UN to monitor the new locations.
But experience shows that Iraqi governments’ promises cannot be trusted.

Only six hours before the massacre of 8 April began, the US Embassy officially assured that Iraq’s Prime Minister had promised the residents that he has no intention of committing violence.

For these reasons, Seven months ago, the residents declared they are only ready to consider relocation in Iraq if the new location is officially protected by US or UN blue helmet forces.

They said they prefer an honorable death in a place they have lived for 25 years to death in unfamiliar places.

Nevertheless, neither United States nor the United Nations have given any assurance about the safety of the residents after relocation.

They instead, rely on empty promises of Iraqi government without undertaking any responsibility.

The Iraqi government tries to frame the issue of forcible relocation as a matter of national sovereignty.

But national sovereignty must not be used as a cover for committing crimes against humanity war crimes, and breaching the principle of responsibility to protect.

Otherwise, Hitler’s death camps and the crimes of Libya’s former dictator and Syria’s dictator would also be interpreted as their right to national sovereignty.

To hide behind Iraqi sovereignty to justify indifference to crimes committed by the Iraqi government against Camp Ashraf is totally unacceptable.

The mullahs in Iran and their allies try to cover up the truth by a wave of psychological war.

They suggest that the PMOI and its leadership are blocking UHNCR procedures so they would be responsible for any massacre.

In fact, they seek to misplace the butcher and the victim.

Despite their undeniable right to remain in Iraq and Ashraf, residents of Ashraf accepted the European Parliament’s plan for their resettlement in third countries.

In addition they presented seven alternative plans, including a temporary relocation to Iraq’s neighboring countries.

Despite having lived legally in Iraq for 25 years, and in order to remove any obstacle to their resettlement, they presented applications for refugee status.

But for three months Iraqi government has prevented the UNHCR to start its work and confirm the refugee status of the resident.

The residents are ready to discuss any option other than their murder or surrender to the Iranian regime.

But the Iranian regime and Iraqi government are only thinking of these two options: their total elimination or their surrender and not their departure from Iraq.

This is the heart of the crisis.

Therefore, the presence of representatives of the residents in the negotiations is essential.
As emphasis by the UN Secretary General in paragraph 66 of his 7th July report to UN Security council; “The implementation of any arrangement must be acceptable to the Government of Iraq and the camp residents”. 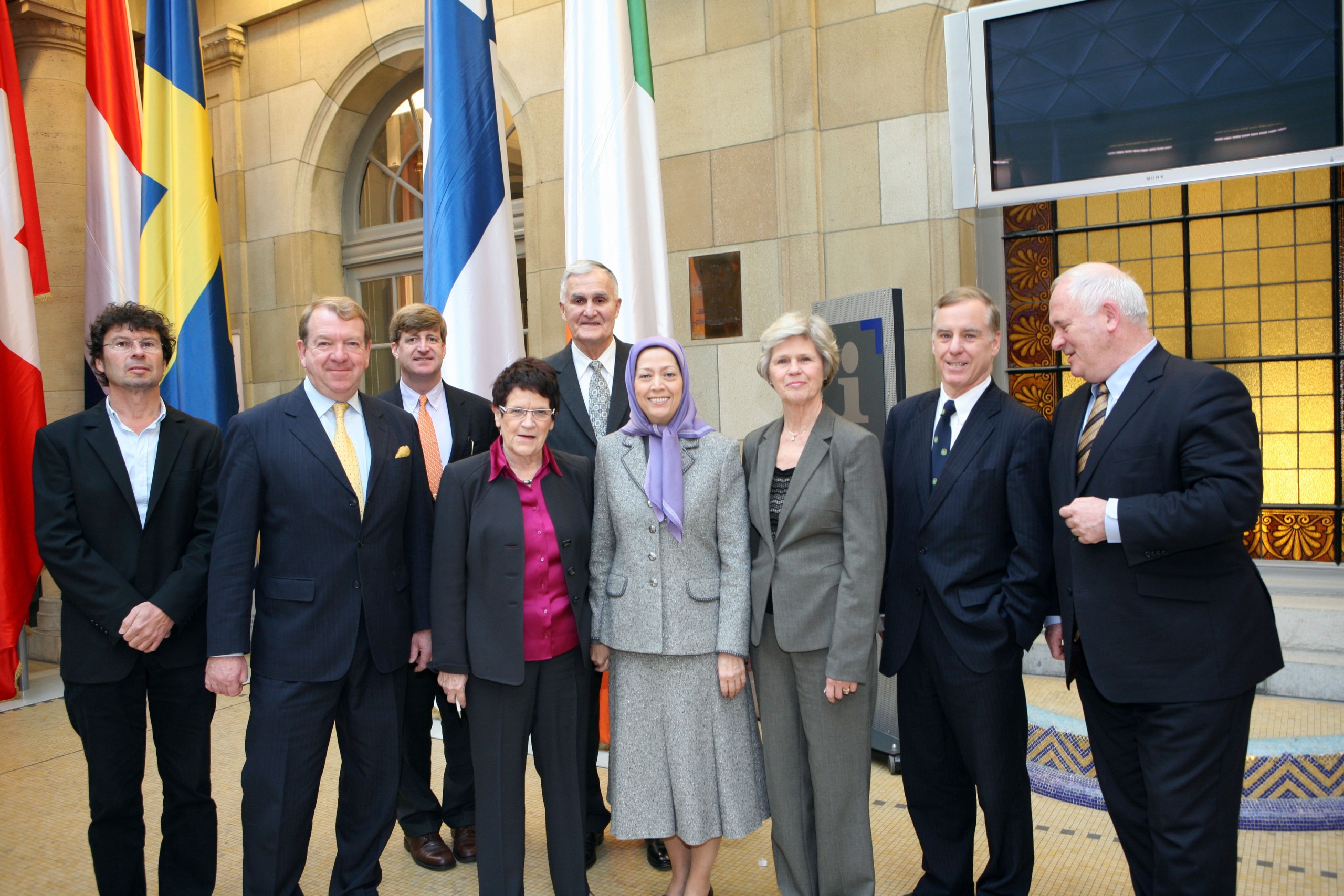 In order to maintain their fragile power, on one hand mullahs want to obtain nuclear bomb and on the other hand they want to destroy their principal opposition especially in Ashraf.

Sanctions are necessary, but this alone cannot be a solution to the Iranian regime’s nuclear weapon.

The only way to prevent the mullahs from obtaining a nuclear bomb and the only way to assure international peace and security is regime change and the establishment of a democratic and non-nuclear Iran.
This is a regime that took hostage British diplomats yesterday in Tehran by order of Khamenei because it wants to block international firmness by blackmailing.

On the other hand the Iranian regime wants to block the path to regime change with a massacre in Ashraf and the destruction of its legitimate opposition.

Please allow me to summarize here the solution offered by the Iranian Resistance and its demands for Camp Ashraf, which in reality is part of the solution for Iran as well:

First – Any forcible relocation inside Iraq must be “put aside”. The illegal and suppressive deadline of 31 December, 2011 must be cancelled so that the UNHCR’s work and the transfer of all residents to third countries is accomplished.

Second – Considering the Iraqi government’s opposition to the UNHCR refugee status confirmation of the Ashraf resident, the only way to deny an excuse for massacre of defenseless residents is a group determination of their refugee status by the UNHCR.

This would allow enough time for individual application to be reviewed.

Third – The security of the residents of Camp Ashraf by the blue helmet UN forces, and the stationing of a UN monitoring team at the camp be guaranteed by the UN Security Council; until the transfer of the last person to third countries.

Fourth – the international community and especially the member states of the European Union accept any number of ill and wounded residents on an urgent basis.

Fifth – Comprehensive sanctions, especially on oil, gas and trade must be imposed on the Iranian regime.

Today the EU, the United States of America, and the United Nations are clearly aware of the disturbing plan to forcibly relocate and massacre the residents of Ashraf.

We have presented all the necessary documents and information to them.

Members of European Parliament and National parliaments, Members of Congress in the US as well as distinguished American and European dignitaries have said everything.

I would like now to tell the leaders of European Union: you have the power and the means to avert a definite humanitarian catastrophe.

Baroness Ashton has the means to lead a peaceful solution for Ashraf.
I warn that if immediate action is not taken, the EU and its leaders would be held responsible for any consequences in Ashraf.