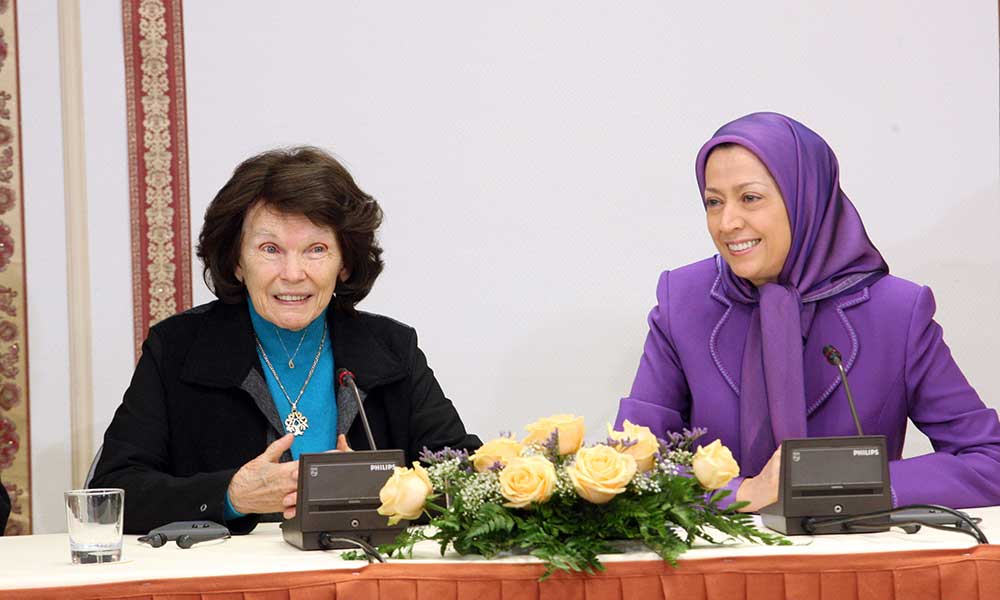 We cannot forget that in 1984, when hundreds of members of the People’s Mojahedin Organization of Iran (PMOI) were being executed by Khomeini on a daily basis, she appeared on the side of the Iranian Resistance’s Leader, Massoud Rajavi, in order to defend human rights in Iran.
We cannot forget that in 1987, when Iranian refugees in France became victims of a deal and were expelled to Gabon, she visited their families who had launched a hunger strike, in order to show her support.

We cannot forget that 10 years ago, on June 17, 2003, when the mullahs’ allies and advocates of appeasement with the regime attacked us in Auvers-sur-Oise, she courageously defended the innocent in the face of media accusations and powerfully confronted the demonization campaign.

It was France’s conscience that spoke through her that day.
The residents of Camp Ashraf and the Iranian people will never forget her powerful, emotional and insightful words in defense of the rights of the Resistance’s freedom fighters in Ashraf.
In her last message, she wrote: “My dear compassionate friends in Ashraf, your sacrifices will shape the future. It is not just the price that you pay, but the example that you are setting for all those who are oppressed, and the message of hope that you send to humanity through your blood.”
And, today, my dear Danielle,
I wish you were here so you could echo the voices of your Ashrafi friends who are now imprisoned in Camp Liberty.
They have been forcefully relocated and deprived of the most basic rights to life and to medical treatment, which has led to the deaths of some among them.

That is why they are demanding an immediate return to Ashraf, a place that is more secure against the clerical regime’s threats.
The regime is mired in a profound crisis and the ridiculous sham election has intensified its internal fissures.
On the orders of Khamenei, Rafsanjani, a founder of this dictatorship, has been banned from running in the presidential race. This marks an enormous purge at the top of the clerical regime and has created a profound rift within it.

I have urged the Iranian people to completely boycott the fraudulent elections and warn western governments that any deals or appeasement vis-a-vis the Iranian regime would solely enable the suppression and massacre of the Iranian people, while encouraging a nuclear arms race, export of fundamentalism and terrorism and intensification of war in the region along the lines of the Syrian crisis.

Dear Friends,
The Iranian people and Ashrafis know that there are freedom-loving women and men, like those of you here, who stand on their side.
They know that they are not alone and they know that the torch lit by Danielle Mitterrand will remain aflame in the hands of the members of this foundation, who are competently and successfully walking in her foot steps.

I would like to thank France Libertés, especially Mr. Gilbert Mitterrand and Mr. Michel Joli, for defending the rights of Ashrafis and the Iranian people.
The Iranian Resistance is honored to dedicate to you a sculpture of Danielle Mitterrand, the undying lover of freedom and the first lady of resistance against injustice.
Indeed, her portrait will be eternally engraved in the hearts of the members of the Iranian Resistance, and particularly those in Ashraf and Liberty, as it has been engraved in the hearts of oppressed peoples around the world.
I thank you all.