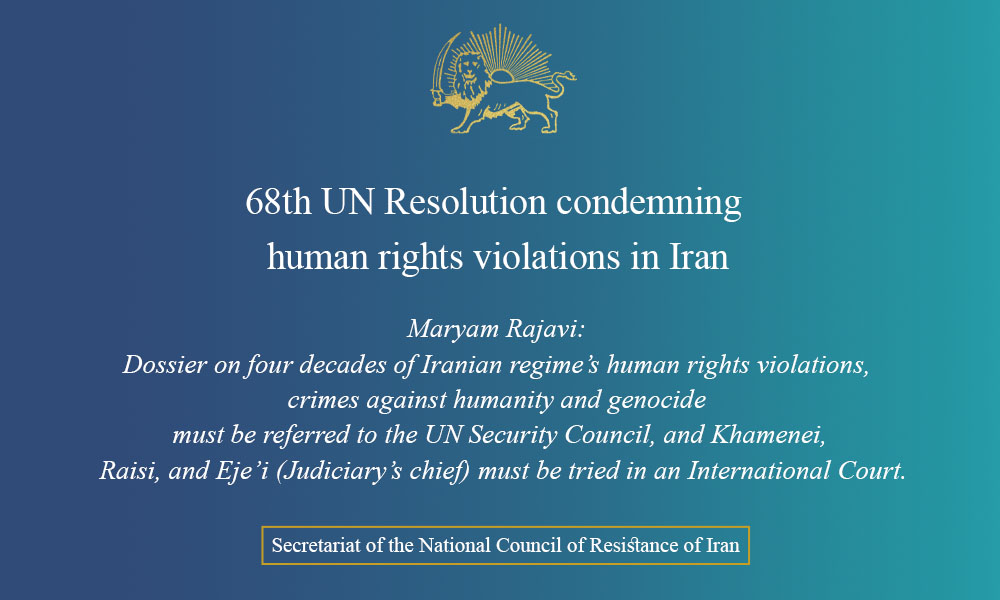 Maryam Rajavi: Dossier on four decades of Iranian regime’s human rights violations, crimes against humanity and genocide must be referred to the UN Security Council, and Khamenei, Raisi, and Eje’i (Judiciary’s chief) must be tried in an International Court

Welcoming the adoption of the 68th resolution of the United Nations’ Third Committee condemning the brutal and systematic violations of human rights in Iran, Mrs. Maryam Rajavi, the President-elect of the National Council of Resistance of Iran (NCRI), said: While this resolution reflects only a small portion of the crimes of the ruling religious fascism in Iran, it, nevertheless, leaves no doubt that this regime has always been the leading human rights violator in the world. The dossier on four decades of crimes against humanity and genocide committed by this regime, especially the 1988 massacre of 30,000 political prisoners and the massacre of 1,500 demonstrators in 2019, must be referred to the UN Security Council, and the leaders of this regime, including Ali Khamenei, Ebrahim Raisi, and the Judiciary Chief Gholam Hossein Mohseni Eje’I, must be prosecuted in an International Court. The international community must shun this regime and end impunity for its criminal leaders.

The resolution “Expresses serious concern at the alarmingly high frequency of the imposition and carrying-out of the death penalty,” “widespread and systematic use of arbitrary arrests and detentions,” “deliberately denying prisoners access to adequate medical treatment and supplies,” and “appalling acts committed by prison guards at Evin prison,” “harassment, intimidation, and persecution, including abductions, arrests, and executions, of political opponents, human rights defenders,” and “arbitrary arrest and detention, and torture and other cruel, inhuman or degrading treatment or punishment against peaceful protesters,” and “the use of torture to extract confessions, and cases of suspicious deaths in custody.”

“Reiterating the importance of credible, independent and impartial investigations in response to all cases of serious human rights violations…including enforced disappearances, extrajudicial executions, and destruction of evidence in relation to such violations,” the resolution calls for an end to “impunity for such violations.”

In his report to the current session of the General Assembly, the UN Secretary-General wrote, “There are a series of reported efforts allegedly aimed at destroying evidence of the execution of political dissidents at that time (1988) and the harassment and criminal prosecution of families of victims calling for truth and accountability.”

Secretariat of the National Council of Resistance of Iran (NCRI)
November 17, 2021