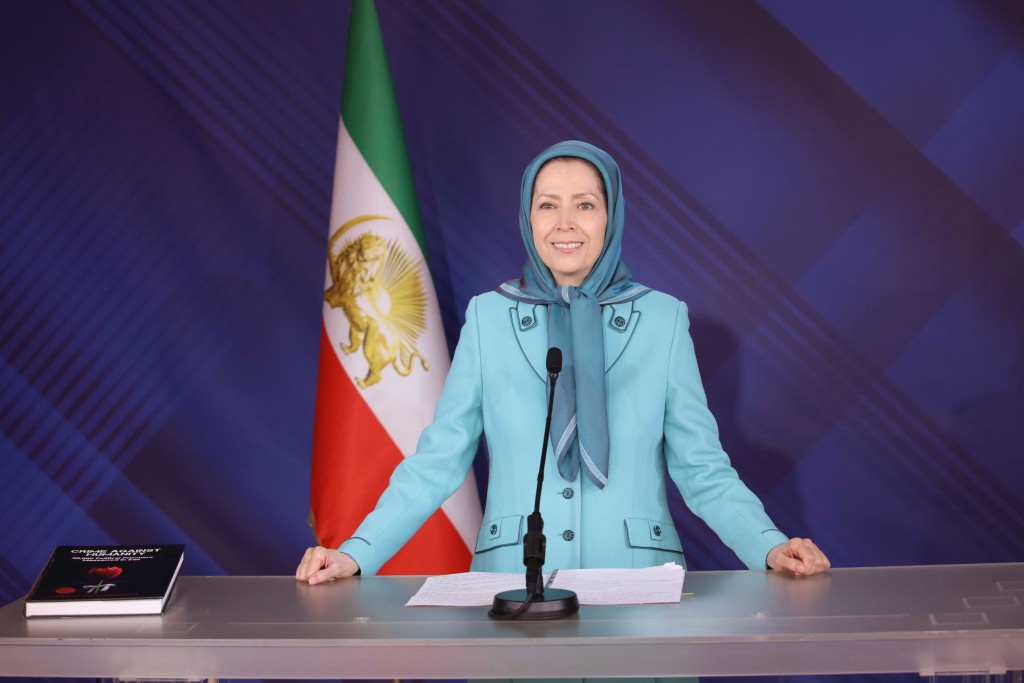 Fellow compatriots,
Dear friends and supporters of the Iranian Resistance,
I salute and congratulate you all for staying loyal to your pledges with the 1988 massacre martyrs and always being prepared to preserve the PMOI/MEK’s traditions, ideology, and leader.
You stay your ground against whoever wants to trample upon the blood of PMOI martyrs and the movement seeking justice for them to the benefit of the clerical regime.
Indeed, what you did over the past year is yet another roaring epic.
May your determination and struggle in the fight against the clerical regime be forever enduring.

Prosecution of Khamenei and Raisi

After nearly three years, the Swedish Judiciary handed down its verdict, sentencing to life one of the perpetrators of genocide and crime against humanity in the massacre of political prisoners in 1988. And I stress this is only one out of all the murderers involved.
Of course, we welcome the ruling, which is the outcome of your efforts and sacrifices and deserves to be congratulated. However, full justice will be only done when all the masterminds and perpetrators are prosecuted in the Iranian people’s courts. That includes Ali Khamenei, Ebrahim Raisi, Hossein-Ali Nayeri, Gholam-Hossein Mohseni Ejei, and others.
Also, the mercenaries and operatives whose collaboration with the regime Amnesty International has documented.

The Death Commission made PMOI prisoners answer the following questions:
-Are you ready to condemn the PMOI/MEK and its leaders?
-Are you ready to join the armed forces of the Islamic Republic to fight the PMOI/MEK?
-Are you willing to spy on your former comrades and cooperate with intelligence agents?
-Are you willing to become a member of the death squads?
-Are you ready to hang a PMOI prisoner?
Yes, in the Iranian people’s ultimate call for justice, the secrets of the biggest massacre of political prisoners in contemporary history will be revealed. The questions that Massoud Rajavi asked the UN Human Rights Rapporteur on February 12, 1996, will also be answered.
– What is the exact number of political prisoners executed during the massacre and before and after it?
-Where are the bodies buried?
-Where are the mass graves?
-How many of those executed were under 18?
-How many of them were women, especially teenage girls?
-And the number and addresses of official and unofficial prisons and safe houses of the Intelligence Ministry, the IRGC, and the State Security Force.
In the past years and months, you, the steadfast supporters of the Iranian Resistance, showed that you are ready to do everything to make this great day come true. You are prepared to pay any price in unison and in solidarity with the Resistance Units inside Iran.

The PMOI face-off with the clerical regime

Dear friends, sisters, and brothers,
The story of the 1988 massacre is the story of an inhuman regime’s confrontation with its only existential threat, i.e., the People’s Mojahedin Organization of Iran (PMOI/MEK).
Khomeini’s fatwa for the massacre remains the main criterion for the regime’s conduct vis-à-vis the PMOI and the Iranian Resistance.
The physical, political, and ideological elimination of the PMOI/MEK topped the clerical regime’s agenda from the first year.
We just recently heard this fact from Hossein-Ali Nayeri, the head of the Death Commission in Tehran. He explicitly said, “If it were not for the decisiveness of Imam (Khomeini), we might not have had any security… The whole system would not have survived. What should have been done? Such critical circumstances deemed a decisive fatwa.”

Nayeri also revealed the regime’s desperation in the face of the prisoners who remained steadfast. He said, “They were cohesive. Not only did they have contact with their organization, but they also had formed a new organizational structure inside the prison.
They received information from outside through ways they knew. They dominated the prison’s atmosphere. So, they wanted to continue their hostility.”
This criminal thus acknowledges the very truth that the court’s witnesses and plaintiffs said about the courage of PMOI prisoners, who fully cognizant, adhered to their principles and beliefs and said “NO” to Khomeini and his operatives. They remained loyal to the name, the path, and the cause championed by the PMOI and Massoud Rajavi and kissed the noose.
Of course, the case examined in this court was a small part of what happened in Gohardasht Prison.
You can imagine the day when the heinous massacre in Evin and the countless crimes committed in various cities will be revealed.
You can imagine the day when the heroism of female PMOI prisoners during the massacre and the crimes committed against them will be revealed.

Dear friends, sisters, and brothers,
We still have a long way ahead of us before we achieve complete justice. But the Iranian Resistance’s extensive legal, political, and enlightening campaign over the past 33 months has already achieved a great victory so far. And you had an indispensable role in this victory.
The court’s ruling has crushed the multi-dimensional plot by the Intelligence Ministry and its mercenaries to derail the Call for Justice Movement against the PMOI/MEK.

Their plot included the necessary preparations to have Hamid Noury acquitted and released.
You certainly recall the statement of the NCRI’s Security and Counter-terrorism Committee on November 15, 2019, which exposed this plot. The statement said, “Dozens of PMOI members at Ashraf-3 (who have witnessed Hamid Noury’s crimes first-hand) are ready to testify about what they saw.
However, any meaningful judicial investigation of Hamid Noury’s case, free of wheeling and dealing, requires halting the involvement of the regime’s agents in this case.”

The trial would have turned out differently if some of the court sessions had not been held in Albania. The court was presented with decisive documents proving Noury’s guilt to which the prosecutor repeatedly referred.

Perseverance of the Iranian Resistance’s supporters

Your unrelenting nine-month demonstrations outside the Court in Stockholm had an unforgettable role in this great campaign.
You stood firm despite the freezing temperatures to defend the identity and cause of the martyrs of the 1988 massacre. You did not allow the regime, its agents and mercenaries distort and cover up the real objective of the Call for Justice Movement.
Let’s not forget that this case still has many serious questions and ambiguities that need to be addressed and answered.

The NCRI Security and Counter-terrorism and the Judiciary committees have pointed out these instances. There is no doubt that truth will come out.
In 2016, with the completion of PMOI’s relocation from Camp Liberty (Iraq) to Albania, we gave urgent priority and extra resources to the case of the massacre of 1988.
I have repeatedly declared that we will continue the Call for Justice Movement with maximum determination. I reiterated that we would not relent until we pour the poison chalice of human rights down the throat of religious fascism just as we forced the regime to drink the poison chalice of ceasefire (in the Iran-Iraq war).

Now, we have taken one step forward in the path to Call for Justice Movement. However, it must continue until all the regime’s leaders and officials face justice.
I want to be clear: Genocide, crime against humanity, and massacre must be recognized – with precisely these legal terms– by national and international courts and the UN Security Council. And international investigation must be carried out in the presence of the representatives of the Iranian Resistance.
The Iranian people’s fight against the clerical regime and the Resistance movement that started on June 20, 1981, independent from any foreign government or power, will forge ahead with full power until we overthrow the mullahs as desired by the Iranian people.
I salute you for standing up and changing the equations. You will continue and you will stand to the end, strong and steadfast, and loyal to your pledges.

Onward to greater victories,
Victory is yours.