Maryam Rajavi: The message of Iran uprising to the world and EU leaders: Mullahs’ era has come to an end 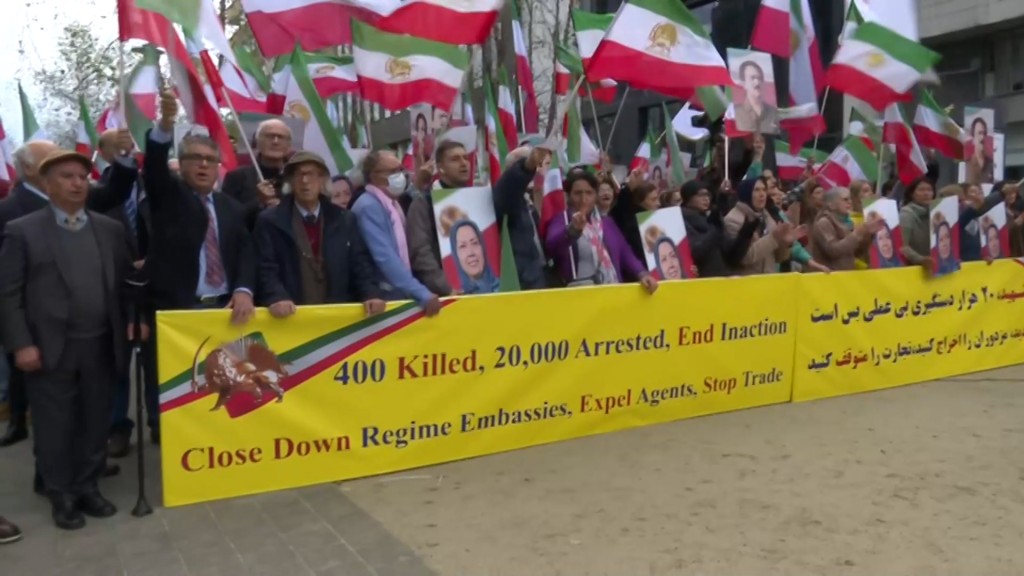 Fellow compatriots,
On its 36th day, the magnificent Iran uprising continues to shake the pillars of Khamenei’s oppression, crimes, and injustice. Through your rally today, it is now sending a powerful message to the world.
The message of the Iran uprising to the leaders of the 27 European Union member states, presently meeting in Brussels, and to all the world leaders is that the mullahs’ era has come to an end.
The era for an international Iran policy based on engaging the clerical regime has also come to an end. Now, the people of Iran, the Iran uprising, and the Iranian Resistance are the ones who will have the final say. Recognize the Iranian people’s struggle to overthrow the regime!

During the past five weeks of the uprising, owing to the sacrifice of Iran’s selfless children, particularly the brave women, the world has witnessed the unwavering resolve of Iran and Iranians to bring down the clerical regime in its entirety.
The young people and protesters’ uprising has made Khamenei the main target of public anger and disdain. The mullahs have turned to killing and slaughter because they have no other solution.
On the evening of October 15, Khamenei’s Special Unit committed a horrific crime in Tehran’s Evin Prison. According to a premeditated plan, they attacked defenseless prisoners, an obvious example of a crime against humanity. The guards threw down some of the prisoners from the roof. Many were targeted by direct fire. They fired so much tear gas into the closed wards that the prisoners were suffocating. They viciously beat the prisoners on the head and elsewhere with batons and stun guns. At least, between 30 to 40 prisoners were killed. Dozens of other prisoners were wounded. They are suffering from pellet-riddled bodies, and until today, they have been denied medical treatment.

Sit-ins in Iran and around the world

The United Nations should urgently establish a fact-finding mission to go to Evin prison along with a representative of the Iranian Resistance to examine the effects of crime against humanity in the Evin Prison.
On the night of October 15, I urged the UN Secretary-General Antonio Guterres to give priority to the formation of a fact-finding mission to deal with the disaster in Evin Prison. The Iranian Resistance will pursue this objective on the international level with all its power.
The families of the political prisoners who support the People’s Mojahedin (PMOI/MEK) gather daily in front of Evin, emphasizing Khamenei’s direct responsibility in this incident. Outside Iran, freedom-loving Iranians have also staged sit-ins in several capitals to urge the international community to seriously react to this heinous massacre.
But let us tell the mullahs that the fire you set to our prisoners in Evin will soon turn your entire regime into ashes. Repression and killing did not save the Shah’s dictatorship from being overthrown, nor will they rescue the religious tyranny.
Regardless of what the mullahs do, it will be impossible to return to the political, social, and international situation before the uprising began. The current conditions move in only one direction and towards one destination, which is the unceasing progress of the Iranian people’s uprising toward the regime’s overthrow.

I say to the university, high school students, and courageous youths: Do not get tired, but tire the enemy. Do not despair in the face of the mullahs’ crimes. Just as you did during the several weeks of the uprising, spread hope and faith in victory everywhere. Resist and fight, which is the secret to your certain victory.
We say to the western governments:
Iran’s freedom, human rights, and Resistance should not be sacrificed at the altar of commercial and political interests. This is the cry of Iran’s uprising.
The world is concerned about the warmongering of Iran’s ruling religious fascism in Europe. So, the regime’s overthrow is not only the Iranian people’s desire but an urgent need for peace, tranquility, and the fight against terrorism in the Middle East and the world as never before.

Obligations of the world and Europe

We urge Europe and the entire world to:
Recognize the Iranian people’s right to self-defense; recognize their right to struggle to overthrow religious fascism and establish freedom, democracy, and human rights;
Designate the entire IRGC and the Ministry of Intelligence as terrorist entities, expel their agents and operatives, and revoke their passports;
Target the economic lifeline of Khamenei and the IRGC; and
Refer the clerical regime’s dossier on the crackdown of protests and the massacres in 1988 and 2019 to the UN Security Council. Those directly involved in these crimes, especially Ali Khamenei and Ebrahim Raisi, must face justice.
With its brave and rebellious men, women and youths, the Iran uprising will forge ahead until the clerical regime is overthrown.
As the Leader of the Iranian Resistance, Massoud Rajavi, said, “We must fight hard until we can destroy the religious fascism. We must overthrow the regime in its entirety and take back Iran. Iran’s democratic revolution will succeed.”
Victory to all of you