Iran: Retirees protest for the third time in the Persian new year in 27 cities (20 provinces) 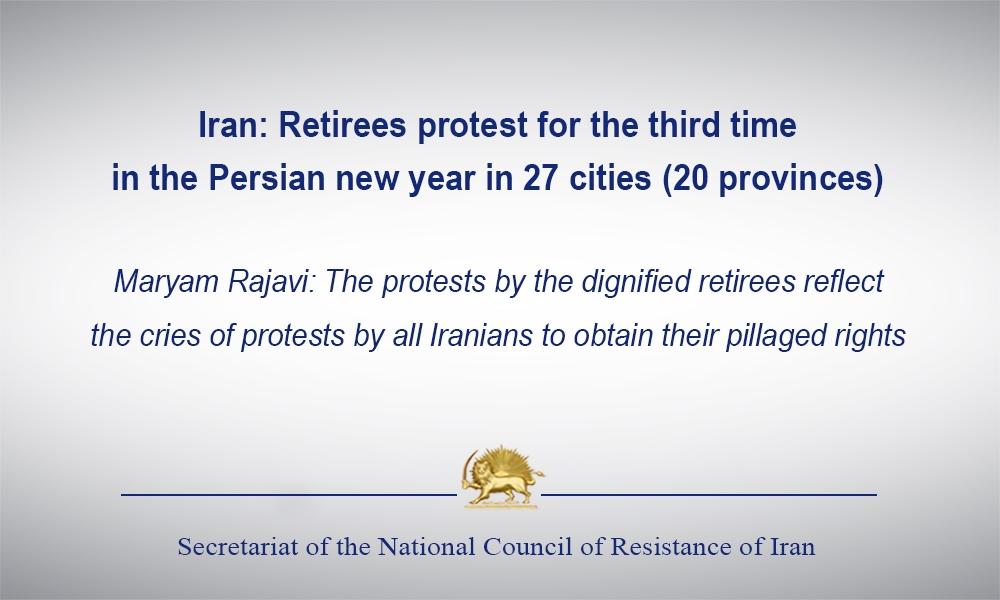 Maryam Rajavi: The protests by the dignified retirees reflect the cries of protests by all Iranians to obtain their pillaged rights

On Sunday, April 11, 2021, in the third nationwide protest rally in the Persian new year (March 20, 2021) retirees and pensioners protested against the clerical regime’s oppression, the dire living conditions, low salaries and devastating high prices that have made it impossible for them and their families to survive in Tehran and 26 other cities.

In Tehran, despite the heavy presence of the State Security Force (SSF), the protest followed by a demonstration was held in front of the regime’s Parliament building and in other cities in front of the branches of the social security office. The SSF blocked the pensioners and attacked anyone trying to take video to prevent the people from joining the rally and to spread the news of the protest.

In Tehran, repressive forces arrested a woman who was filming but were forced to release her following protest by others. After gathering in front of the Parliament, retirees marched towards the Planning and Budget Organization, chanting, “Unless we obtain our rights, we will be doing this every Sunday.”

In Tabriz, retirees put an empty tablecloth on the ground symbolizing their empty dinner tables, to protest their deteriorating economic situation. While chanting slogans, they entered the Social Security building and began a sit-in there. The SSF used batons to try to remove them from the building but the retirees resisted.

In Isfahan, retirees closed Abbasabad Street for two hours and resisted SSF’s actions to open the road. In Rasht, too, retirees clashed with the State Security Force, who had detained several protesters.

Retirees in most cities stressed the need to boycott the clerical regime’s sham presidential election, chanting, “We have heard too many lies, we will no longer vote.” Other slogans included, “Only by taking to the street may we obtain our rights,” “Our tables are empty, enough of repression,” “We will resist, until we get our rights even if we have to sacrifice our lives,” “Enough of empty promises, our tables are empty,” “Rouhani, you are a liar, what happened to your promises,” “Our enemy is right here (the regime), they lie that it’s the America,” and “We have not seen any justice, we will no longer vote.”

Mrs. Maryam Rajavi, the President-elect of the National Council of Resistance of Iran (NCRI) stated: The nationwide protests by the dignified retirees reflects the cries of protests by all Iranians to obtain their pillaged rights by the mullahs’ usurper and corrupt regime. This regime has been squandering the national wealth and the fruit of workers’ labor through plunder, warmongering, nuclear and missile programs, and domestic suppression. Mrs. Rajavi urged all Iranians, especially the brave youths, to show solidarity for and support the retirees’ rightful demands. She added that as long as the mullahs’ dictatorship remains in power, unemployment, inflation, corruption, injustice, and class differences will exacerbate.

Secretariat of the National Council of Resistance of Iran (NCRI)
April 11, 2021