Maryam Rajavi: Instead of welcoming Raisi, the henchman of the 1988 massacre, prosecute him 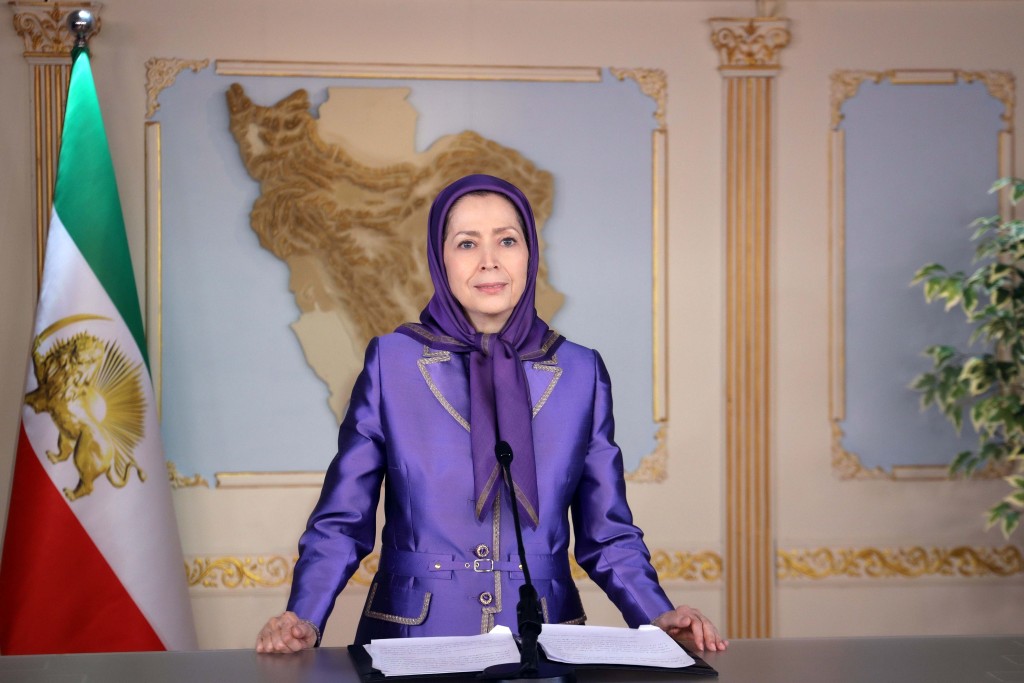 Message to the Iranians’ rally in New York

Dear compatriots and supporters of the Iranian Resistance,
Greetings to all of you. I commend you especially because in circumstances where the people of Iran, from Kurdistan to Tehran, have risen up against Khamenei’s bloodthirsty tyranny, you have hoisted the flag of their movement and uprising in front of the United Nations. Your cries echo the voice of the Iranian people against the United Nations admitting the henchman of the 1988 massacre.
The unjustified death of Mahsa Amini, who is now the daughter of all of Iran, ignited the powder keg in our rebellious cities.

From Saqqez, Sanandaj, and Divandarreh, to Tehran, Karaj, Isfahan, Mashhad, Rasht, and other cities of Iran, brave protesters have shaken the pillars of Khamenei’s oppressive rule with their chants of “From Kurdistan to Tehran, Iran is drenched in blood,” “Khamenei is a murderer, his rule is illegitimate,” and “Death to the oppressor, be it the Shah or the (mullahs’ supreme) leader.”
Our brave compatriots in Kurdistan went on a general strike. The students at Tehran University, Sharif University of Technology, Amir Kabir University, Melli University, Tarbiyat Modarres University, Allameh University, University of Arts, and Isfahan University also held daring demonstrations. All these signs indicate that a powerful force is embedded in the heart of Iranian society, which is determined to overthrow the regime.

The protesters’ cries reinforce the expanding and effective activities of the MEK Resistance Units across the country, which have sounded the regime’s death knell.
Iranian people have risen for freedom. Those who admit the murderers of the Iranian people to the United Nations should be ashamed.
Indeed, the moment this murderer enters the building that is supposed to serve the nations of the world is a moment of shame and disgrace for those who appease the ruling religious fascism, a moment that scars the conscience of humanity.
Ebrahim Raisi has the blood of 30,000 MEK and other political prisoners on his hands. He has been involved in handing down criminal death sentences for many years. As the head of the mullahs’ Judiciary, he is responsible for killing 1,500 youths during the November 2019 uprising. The number of executions has doubled during his term in office.

Raisi is the murderer of the Iranian people, not their representative. He must be prosecuted, not allowed into the United Nations.
This is an insult to the people of Iran, especially the families of the victims of the 1988 massacre, the family of Mahsa Amini, and thousands of other innocent victims who have been suppressed and tortured.
Today, fearing their imminent overthrow, the mullahs have resorted to a relentless wave of executions. By doing so, however, they dig their own graves. The mullahs have panicked because they hear the rumblings of a volcano about to erupt.

Last year, Khamenei accepted the shame of appointing a notorious killer, the henchman of the 1988 massacre, as the regime’s president. He wanted to block the advancement of the protest movement. He sought to contain the expansion of Resistance Units and the escalation of their activities.
He wanted to rein in the deterioration of the regime’s political and economic situation by further warmongering and terrorism and advancing the nuclear weapons program.
But he failed in all these objectives. As Massoud [Rajavi, the leader of the Iranian Resistance] said, “The henchman of the 1988 massacre is the most obvious indicator of the era of overthrow.”
Today, Khamenei is himself in the throes of death. The public’s enormous hatred toward Ebrahim Raisi, as well as the decay and decline of the Revolutionary Guard Corps (IRGC), signal the clerical regime’s end.
Khamenei and Raisi drag their dying regime from one day to the next through the monthly executions of dozens of people, the monthly printing of 500 million dollars’ worth of banknotes without backing, multiplying the prices, and starving the people.
In contrast, the struggle and sacrifice of the MEK and Resistance Units give people hope and encourage them to prepare for the final uprising to bring down the mullahs.

Khomeini and the regime’s current leaders did not know that the roaring blood of the martyrs would one day drown them. They did not know that seeking justice for the victims of the 1988 massacre would contribute to the movement to overthrow the regime.
Your vociferous rally echoes the desire of the Iranian people and Resistance. Indeed, they want to see Khamenei and Raisi prosecuted for the massacre of political prisoners in 1988, crimes against humanity, and genocide.
The Iranian people and Resistance call on the UN member states to expel the clerical regime from the United Nations and all international forums.

I urge the current session of the United Nations General Assembly to take immediate action regarding the clerical regime’s crimes against women, especially the crimes and daily killings by the mullahs’ guidance patrol.
All governments should predicate their relations with the mullahs’ regime on the halt to executions, the suppression and killing of protesters, and the destruction of the regime’s terrorism machine and hostage-taking. They should officially recognize the right of the Iranian people to regime change and the right of Iran’s rebellious youths to fight against the regime’s terrorist Revolutionary Guard Corps (IRGC).

Hail to all of you,
Victory will be yours