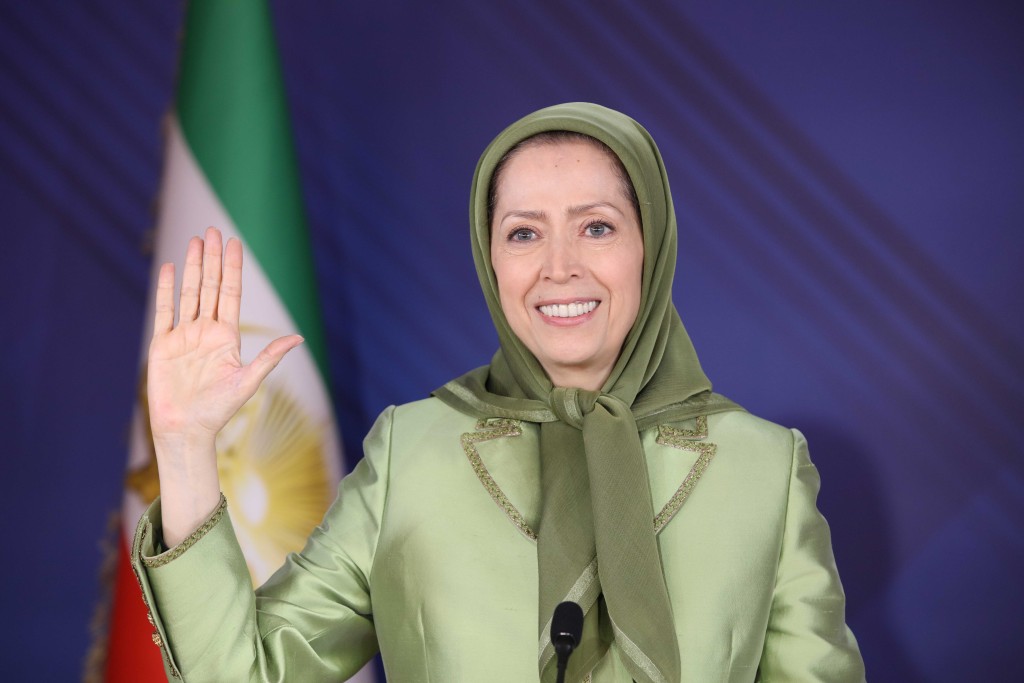 The arisen Iranians who are staging this huge and magnificent demonstration in Berlin, the Free Iran gathering in Germany.

Before all else, I want to ask what have you done to have prompted the mullahs are screaming against the Iranian Resistance?

What has happened can be summarized as such: Amid the Iranian people’s pain and suffering, the overthrow of the regime has appeared on the horizon and the mullahs are trembling.

A pact with the devil

You are certainly aware of the latest developments. Following legal complaints by the NCRI and several international dignitaries, Brussel’s Court of Appeals prohibited the government of Belgium from sending the Iranian regime’s bomb-carrying diplomat-terrorist to Iran, predicating it on a substantive examination.

To do so was what we had wanted: to have time so that there would not be a surprise transfer of this diplomat-terrorist. The court is scheduled to address the merits of the request by the plaintiffs to prohibit Assadi’s freedom.

The court’s ruling came immediately after the adoption of a shameful treaty which Belgian parliamentarians said was a dark day. They said this was crazy and they cannot find proper words to describe it. They also said they were proud of many Iranians who had joined the campaign.

I have already said, and I reiterated that pinning hope on the release of an innocent Belgian hostage in Iran is one-step forward and 100 steps back because, in the future, no one will be safe. Every European and American citizen in Iran will become a potential hostage.
Is this not a pact with the devil against the security of European and American citizens, the Iranian people, and their Resistance?

Indeed, what is the correct and effective policy against the religious fascism ruling Iran and its Gestapo?

The correct and effective response to religious fascism is one word, “firmness,” and not kowtowing.

The mullahs’ hostage taking and blackmail

When the regime engages in extortion and blackmail, European governments should put the prosecution of the regime’s president, Ebrahim Raisi, for crimes against humanity and genocide on the table. They should close the regime’s embassies. They should boycott and impose sanctions on the regime to force it to release the hostage.

In 2009, with their resistance and firmness, Ashraf residents forced Khamenei’s puppet Prime Minister in Iraq to release our hostages and return them to Ashraf.

They and their friends are present at this gathering today. They went on a hunger strike for 72 days, including a seven-day dry hunger strike. At that time, Ashraf supporters were also on hunger strikes in most countries.

On the other hand, in pursuing the policy of blackmail, and engaging in a ridiculous theatric, the mullahs’ Foreign Ministry has sanctioned 61 distinguished American personalities for supporting the PMOI/MEK, which is of course a badge of honor. Many of them were targets of the bombing plot against the Paris gathering in 2018.

The sanctioning of these personalities is added reason why the Belgian government must not release the bomb-carrying diplomat in violation of the UN Security Council’s resolution 1373.

Eight prominent international jurists have stated that this treaty is “a failure of Europe’s efforts to fight terrorism,” and that mullahs must not be allowed to mock the enforcement of justice in Europe.

They invoked “national security” imperative, but with their own hands, they are making the security of the peoples of Europe vulnerable to state terrorism.

Gentlemen, do not allow this to happen! Let Brussels remain the seat of the European Union, not the headquarters of the mullahs’ terrorism in Europe.

The mullahs have so far arrested at least 150 diplomats, journalists, business people, or Iranians with dual nationality in Iran. They have taken 104 western nationals hostage in Lebanon.

But through your efforts, you made the world take a stand. You held protests in 18 countries and staged sit-ins in five countries including in Berlin.

You showed that there is an unrelenting Resistance, which is the voice, the representative and the guardian of the rights of Iran and Iranians. Thus, we again tell European governments to not rear a snake in their sleeves.

The former German intelligence organization chief revealed the Iranian regime had been behind several terrorist operations after the signing of the JCPOA, but the Europeans kept silent because they did not want to jeopardize the Iran nuclear deal.

So, gentlemen, you missed out on the JCPOA and instead have to deal with the regime’s terrorism while it is getting closer to a nuclear bomb. Truly, for how long do you want to let the monster of terrorism and fundamentalism take you for a ride?

What kind of a policy is this? Its victims are western nationals in Iran. Of course, the main victims have always been and continue to be the Iranian people and Resistance.

My Oath to the People of Iran

Since I joined the ranks of the resistance during the Shah’s reign, I was prepared to sacrifice my life for freedom.

A few years later, when Khomeini shot by firing squads teenage boys and girls, some of whom worked with me, my heart went out to them, and I wished I could be in their place.

I have had this feeling hundreds of times, including when I was hearing my sisters were being executed or massacred in Gohardasht or Evin or other prisons all over Iran.

I have always envied and continue to envy them for their sacrifice, a common feeling among the Mojahedin when they lose the best and the brightest.

The mullahs have been planning to eliminate me for years. And every time in a different venue, in Paris, in Germany, in Villepinte, in Albania, and other announced and unannounced cases.

Therefore, I say to the masterminds of these plans, Khamenei and his accomplices that from the mass killings of the 80s to the 1988 massacre to the massacres of Ashraf and Liberty, you have seen and experienced that killing and eliminating the PMOI/MEK is useless.

This generation has come to sacrifice everything for the freedom of its people. I am one of them, as well.

I wish by sacrificing my life, the killing of my compatriots in Iran could be stopped.

But the bloodthirsty tyrant is insatiable.

My oath to the Iranian people and my commitment to Massoud Rajavi – to my last breath and my last drop of blood – is to overthrow the mullahs’ inhuman regime.

So, I tell the regime’s supreme leader that if he thinks he can stop us by these conspiracies, he is gravely mistaken.

We will intensify the flames of the battle.

And I must say the last word to our heroic people:

What should I pour at your feet to be worthy of you,
Because one couldn’t say that my head and life is worthy enough.

Yesterday, I saw video and audio messages of more than 5,000 Resistance Units, who announced they are ready and said we can and we must overthrow this regime.

I hope this footage can be broadcast soon.
The situation has gotten to a point that neither the butcher Raisi nor a nuclear bomb are going to be effective.

The mullahs’ ploys of trying to raise the dead and deposed shahs from the grave will not cure anything either.

The mullahs regime is at the verge of the same grave in which the monarchy fell.

Yes, Iran will be free and as Massoud Rajavi, the leader of the Iranian Resistance, said: No power in the world can prevent the Iranian people’s uprising and freedom.

May victory be yours.