Maryam Rajavi: A big revolution is in the making in Iran 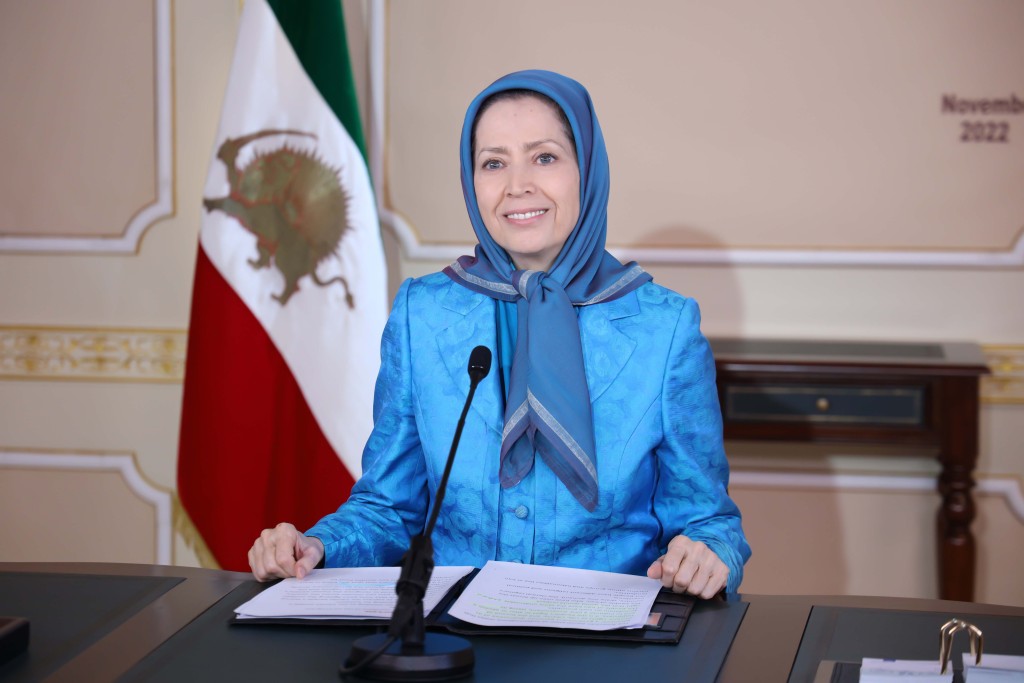 An Iran Congressional Briefing entitled “Support Nationwide Uprising for a Democratic Iranian Republic” was held at the Rayburn House Office Building on Thursday, November 17, 2022. Bipartisan members of Congress attended the meeting to hear the remarks by Maryam Rajavi.

The representatives deemed it necessary to hold the mullahs’ regime accountable for killing Iran protesters in 2022 and November 2019 and the massacre of 30,000 political prisoners in 1988. They underlined the need to reject all forms of dictatorship in Iran, both the Shah and the mullahs.
Addressing the US House Representatives, Maryam Rajavi said in her remarks:

Honorable members of the US Congress,
Dear friends,
I salute you for standing by the Iranian people’s nationwide uprising for freedom.
Today, I want to express the Iranian people’s shared desire for which they have been fighting the mullahs’ regime over the past two months across the country.
They specifically want the world to recognize the Iranian people’s struggle to overthrow the mullahs’ regime and the young people’s fight against the Revolutionary Guards or the IRGC.
Is it not true that a regime that shot and killed at least 57 children in the last two months must be overthrown?
Did this regime not execute 30,000 political prisoners in 1988?
Did this regime not kill more than 1,500 Iranian protesters in November 2019?
Did the IRGC not fire missiles and shot down a passenger airliner with 176 passengers on board?
Is this regime not the most critical threat to world peace and security? Is it not the world’s leading state sponsor of terrorism?

Overthrowing the regime is the Iranian people’s inalienable right

Therefore, no government should hesitate to recognize the regime’s overthrow at the hands of the Iranian people.
The American Declaration of Independence states that whenever a government becomes destructive of its citizens’ rights to Life, Liberty, and the pursuit of Happiness, it is the People’s Right to alter or abolish it and to institute a new Government, laying its foundation on such principles.
The people of Iran have the same undeniable right that the world should respect.
The people of Iran, who have risen up across the country, share one demand: the clerical regime’s overthrow.
Our people have different religions and political tendencies. Various ethnic groups and nationalities live in Iran, but today, all of them are united in seeking the overthrow of religious tyranny.
For years, the mullahs have been the main source of hostility, terrorism, and fundamentalism in the Middle East. Today, its missiles and drones have reached Europe and are used in killing and destruction in Ukraine.
There is one way and only one way to end this problem, which is overthrowing the regime at the hands of the people of Iran. Today, when Iranian youths are putting their lives on the line to topple the mullahs, self-defense is their legitimate right, which the world should recognize.

In this situation, the Western world faces a critical test. They should not ignore their moral, historical, and political responsibility.
The Iranian regime considers the MEK as its main existential threat, and its defining benchmark for relations with foreign countries particularly in Europe and the United States is their position about the MEK.
Therefore, with all sorts of promises or blackmail they seek from their foreign counterparts to take position against the MEK.
The Judiciary’s deputy on International affairs said last June that, “There has been no meeting with the European ambassadors or EU delegation in which we had not addressed the issue of MEK.”
During the uprising and because of MEK and Resistance Units’ active role in advancing the uprising, the regime has intensified its efforts in this regard.
Its objective is to spread disinformation against the opposition and those protesting in the streets, in order to justify the crackdown and execution of those arrested, specially the MEK supporters.

A big revolution in Iran

Dear friends,
A big revolution is in the making in Iran.
First, it rejects all forms of dictatorship. Every day the protesters reject both the Shah’s dictatorship and the mullahs’ tyranny in their slogans.
Secondly, this uprising has been distinguished by the leading role of women. Their active presence has challenged the regime’s misogyny, which is one of its most vital pillars.
The Iranian Resistance’s Ten-Point Plan for the future of Iran emphasizes:
“Complete gender equality in political, social, cultural, and economic rights, and equal participation of women in political leadership. Abolishment of any form of discrimination; the right to choose one’s own clothing freely, and to obtain education and employment. Prohibition of all forms of exploitation against women under any pretext.”
The uprisings are also highly organized, which is the product of the efforts and sacrifices of Resistance Units and the MEK’s organized network in cities across the country. By doing so, they have effectively set the pace and encouraged young people to revolt against the regime. Today, Iranian youths repeat the same methods and aim at the same targets as the Resistance Units.

Dear Friends,
In such circumstances, it is unjustified and shameful to negotiate with and give money to a regime that is killing children.
The people of Iran will never forget the important role of US House and Senate members in supporting the freedom fighters in Ashraf in Iraq.
Today, they expect the US Congress to lead an international initiative to recognize the Iranian people’s right to overthrow the mullahs and establish a democratic republic based on people’s votes and the separation of religion and state.
During the apartheid regime in South Africa, the US Congress passed the Comprehensive Anti-Apartheid Act of 1986. Today, the Congress is also expected to take side with the fighting men and women in Iran with a similar bold initiative.
I thank you all.