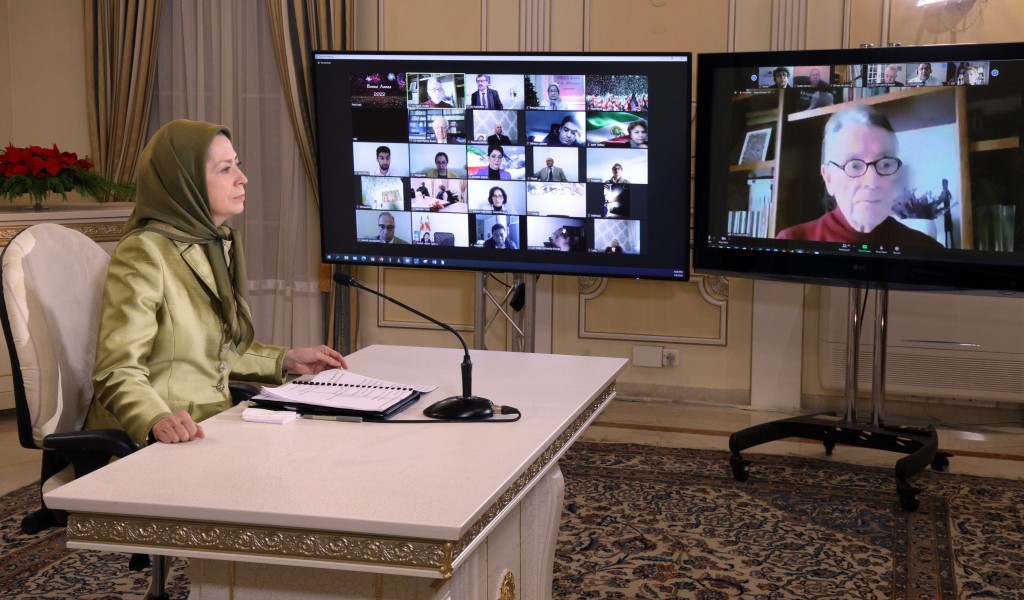 Speech at a New Year gathering – Solidarity with the Iranian Resistance

The elected representatives of the people of Val d’Oise province and a considerable number of the French supporters of the Iranian Resistance participated in a virtual New Year gathering at Auvers-sur-Oise in solidarity with the Iranian Resistance on Sunday, January 9, 2022. Several French personalities and elected representatives spoke to the gathering.
Maryam Rajavi opened the New Year gathering by congratulating the participants. She said in her speech:

I am pleased to see you again in the New Year 2022. I would have loved to see you in person, but unfortunately, due to the pandemic, this was not possible.
I had missed all of you very much. It is a joy to see the most faithful friends of the Iranian Resistance again. I wish you a very Happy New Year.
I hope you and your families will enjoy a brighter life and that you remain safe from all of the scourges of our time.
You have supported and protected the Resistance fighters in Ashraf for many years.
You have been there during both the hardships and happy times, and you share their hope in a free and democratic Iran.
Our beloved neighbors in Auvers-sur-Oise have been on our side during all this time, especially during the events that followed June 17, 2003, and together we have celebrated legal victories.
Your friends in Ashraf greet and thank you.
I want to salute the memory of friends who have left us. I pay tribute to Senator Jean-Pierre Michel. He stood with the Iranian Resistance during his entire life and was a tireless supporter. He had met Massoud Rajavi (the leader of the Iranian Resistance) and remained committed to this just cause until his death.
I must also honor the memory of Manuel Risquez, Marie-Lorette Guilloux, and other friends who have left us. They chose to support the Iranian Resistance, which is why they are all here with us tonight in spirit.
Over the past year, the Iranian people continued their march to freedom.
There was a nationwide uprising against the regime every four months.
In the past several months, the people of Khuzestan revolted against water shortages. The Islamic Revolutionary Guard Corps (IRGC) have exploited water resources to produce weapons and feed their own industries. People in other provinces also supported this uprising.
Recently, the farmers in Isfahan held demonstrations against the drying up of the Zayanderud River. The rest of the people of Isfahan also rose up in their support. In response, the IRGC opened fire and injured the eyes of many protesters.
Since last month, Iranian teachers have been demonstrating across the country.
They live below the poverty line. The teachers have decided to teach everyone the lesson of resistance and freedom.
Despite the arrests, there is an outstanding momentum of solidarity, much stronger than the regime’s repression.
The regime is terrified and repeatedly acknowledges the impact of Resistance Units on these movements. These Resistance Units remind the people of Iran that the solution to all their misfortunes is overthrowing the religious dictatorship.
Recently, the Resistance Units burned the statue of terrorist Qassem Soleimani.
The perseverance of the Resistance members in Ashraf inspires these units. An abundant source of humanity inspires them, and you are all a part of that wellspring of humanity.
2021 was also the year of legal failures for the mullahs.
A Swiss Court prevented the closure of the file on the 1990 assassination of Professor Kazem Rajavi.
Kazem, who represented the Iranian Resistance in Geneva.
The Swiss Justice ordered an investigation into his assassination in the framework of genocide and crimes against humanity.
In Belgium, the regime’s diplomat-terrorist Assadollah Assadi and his three accomplices were convicted for an attempted bombing of the NCRI rally in Villepinte in 2018.
In Sweden, one of the regime’s executioners is on trial for his part in the massacre of 30,000 prisoners in 1988. This is an unprecedented development.
The court moved to Durrës in Albania for two weeks to hear testimonies from members of the People’s Mojahedin Organization of Iran (PMOI/MEK). The move demonstrated again that the PMOI is the principal opponent of the mullahs’ regime.
There are a thousand former political prisoners in Ashraf-3.
Iranians who hold various opinions have united in this trial, which is against the entire regime.
Raisi is one of the key officials responsible for the massacre of 1988. He has increased the number of arrests and executions in Iran. Therefore, the world is facing a regime with no capacity for dialogue. It wants to buy time in the course of futile negotiations in order to produce a nuclear weapon.
I call on France to adopt a policy of decisiveness against the regime by standing with the Iranian people and their Resistance.
The clerical regime needs the bomb to stay in power because it is on the verge of being overthrown. Therefore, to stop the regime’s nuclear program, it must be overthrown.
That is why the world must stand with the Iranian people. It is imperative to support the Iranian people’s struggle for regime change.
You can all help awaken the conscience of the leaders of Europe. This task is essential.
We can all participate in establishing an Iran that lives up to its history. We can build a country that respects democracy, equality, justice, and human rights and contributes to peace and friendship. A free Iran that respects the separation of religion and state.
We will build this Iran.
Thank you again for being who you are: precious friends on whom the Iranian people can count. I send you my best wishes for happiness and health for you and your loved ones.
Happy New Year!